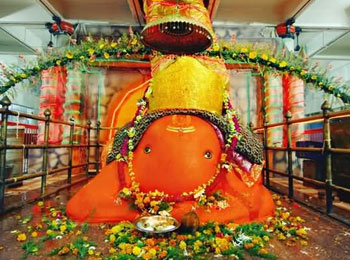 The Tekdi Ganesh Temple is a renowned Hindu shrine dedicated to Lord Ganesh. The temple is around 250 years old making it one among the ancient temple of Nagpur. The temple is located at the centre of the Nagpur, with close proximity to the Nagpur railway station.

The word 'Tekdi' is a Marati word which means hill. This temple is constructed over a hill and thus got to be called the Tekdi Ganesh Mandhir. The temple was initially just a mere tin shade that was built on a small raised platform. During the year 1978, the construction of the new Ganapati temple began and was successfully completed in 1984.

The idol of Lord Ganesha is believed to be self-formed (Swayambhu). The idol measures approximately four feet tall. The originally idol is said to been very small, but is believed to have grown bigger in size gradually. The idol is seen adorning several golden and silver ornaments, especially in the forehead. There is one particular piece of ornament called Mukut (crown) which is worn by the deity only on the auspicious occasions of Chaturthi and Ekadashi.

The ancient Tekdi Ganesh temple started out with being an ordinary tin shed with the idol before being brought under the army’s possession during the 1970s. The army is said to have made small improvements to its structure but major changes to the temple structures came only around the year 1978. The huge project of constructing the temple was undertaken from the generous donations offered by the devotees. The present day structure of this temple was built by late Shri Ganpatrao Joshi and a few other devotees. The temple management later realised that need to expand the temple premises, since it was not able to accommodate the growing number of devotees visiting the temple. They thus requested the Defence Ministry which in turn helped them acquire 20,000 sq. ft. more of the land.

The ritual of Aarti is performed four times daily at 6.30 am, 12.30 pm, 7.pm and 11.30 pm respectively. Modaka is distributed as the prasadh after every Aarti.

Every year in the Paush month on the Sankashti Chaturthi day a grand yatra called as Tekdi Ganapati Yatra is held. The other important festivals are Ganesh Chaturthi and Ekadashi.

How To Reach Nagpur

Dr. Babasaheb Ambedkar International Airport connects Nagpur with rest of India with regular domestic flights. Few international flights are also available to some cities in the Middle East. Taxis can be hired from outside the airport to reach the desired destination.

Nagpur Railway Station has trains connecting the city with many major cities of India. Major express trains have scheduled a stop at Nagpur. Train are easily available from major cities Delhi, Mumbai, Kolkata, Chennai, etc to Nagpur on a regular basis.

Nagpur is a major city in Maharashtra and is well connected to many cities and towns in India through highways such as NH7 and NH6, which passes through Nagpur. Frequent bus services of various classes are available to Nagpur from most major cities and small towns of Maharashtra.