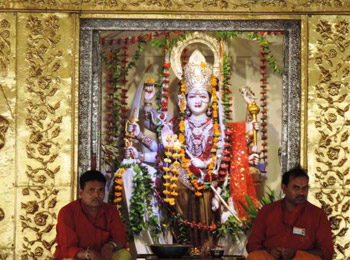 
The Devi Talab Temple is located in the heart of Jalandhar, just about a kilometre away from the railway station. It is believed to be over 200 years old. 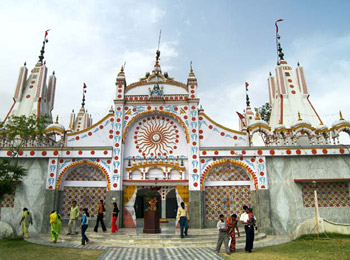 The temple is dedicated to Goddess Durga and is one of the 51 Shakthi pithas in India. The image of Lord Shiva that is enshrined herein is called Bhisan Bhairav. Devi Talab Temple has been renovated recently and a number of changes have been made to the old structure. Also, a new temple has been constructed within the temple premises. Even a model of Amarnath Yatra was constructed sometime back only. Beside the main Devi Talab Mandir, is an old Temple of Goddess Kali. One of the prime attractions of the temple is an old tank, which is considered to be sacred by the Hindu devotees. The temple has a structure resembling the Amarnath Cave temple in Jammu and Kashmir.


Dedicated to Maa Durga, the Devi Talab Mandir is the most prominent place in the city. 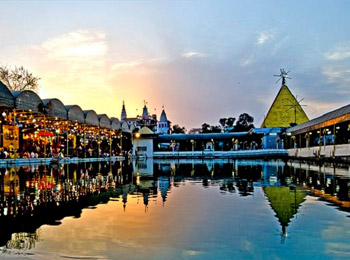 The puranas state that Maa Sati immolated herself after her father Daksha insulted her husband Lord Shiva.  This enraged Lord Shiva who opened his terrifying third eye and danced a fierce tandava across the earth with the body of his beloved Sati in his arms. The gods afraid that the Lord’s anger would destroy the universe sought the assistance of Lord Vishnu who dispatched his all-powerful discus – Sudarshan Chakra – to cut Sati’s body into pieces.  Every spot that received a portion of Maa Sati’s body became in the ages that followed a place of worship for devotees of the Goddess. Each of these spots is honoured as a Shakti Peetha by devotees of the Goddess who are also referred to as Shaktas. The Devi Talab Mandir has the distinction of being one of the 51 prominent Shakti Peethas on the subcontinent. The temple marks the spot that was blessed with Maa Sati’s right breast.


The Temple has a structure resembling the Amarnath Cave temple in Jammu and Kashmir. Devi Talab Mandir. The temple is very famous for the "Harballabh Sangeet Sammelan”, which is organized every year in the month of December. The best time to visit the temple is in the month of December, when one can also be the part of the fair. Famous classical music exponents - both instrumental and vocal - come together and perform in this fair. It presents people with one of the chances to hear some of the best music, as presented in the melodious voice of the reputed singers from all over the country.