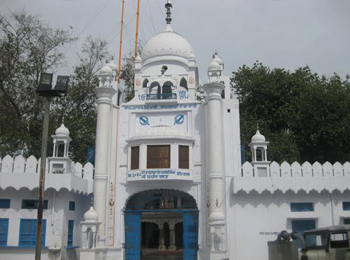 The legendary great martyr Baba Niahal Singh was an artisan- engineer ( Mistry ) residing in villageDakoha near Talhan (Jalandhar ). He belonged to the Ramagarhia community of Sikhs. This community is renowned the world over for their mechanical skills. Baba Nihal Singh was , thus , no fakir or Sant during his life time , in the traditional meaning of a Baba.

Baba Nihal Singh served the people by making pulleys for drinking water wells. His special skills lay in installing his pulleys at the base of the well. People believed that the great Baba was blessed with divinity so that the water wells in which he installed the pulleys never became dry and its water was always sweet.Once, while installing such pulley Baba Nihal Singh met with a fatal accident. For the common man the Baba became a martyr while he was serving the people. " The grateful people constructed a "Samadhi ' in village Talhan and the place of Baba'sSamadh' was looked after by his faithful associate , Harnam Singh. After Harnam Singh'sdeath , the followers cremated him next to theBaba's Samadhi.Gradually, the two Samadhis blossomed into a grand Gurudwara. The devotees started holding an annual Mela to mark the death anniversary ( "Barsi" ) of the Baba. This Mela is quite a grand event inJalandhar.There are sports events like Kabbadi , volleyball and tug-of-war. Gatka displays are held.

The Gurudwara runs a fully modernised charitable hospital. It has recently acquired a Doppler Scan Machine for colour scans.

Shaheed Baba Nihal Singh gurdwara is famous among visa seekers - the popular belief is if you pray in this temple, you will soon get a ticket to your dream land. If this doesn't instill much confidence in you, there is a huge model aircraft on the top of the Gurudwara.

How To Reach Jalandhar

Instead of Jalandhar you can a get flight to Ludhiana Airport on regular basis.

There are regular trains from other major cities of the country to Jalandhar.

Jalandhar is well connected to other major cities of the country via regular buses.