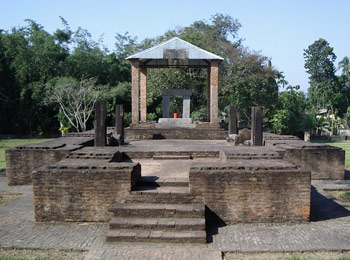 Da Parbatia is a small village that is close to Tezpur, in Assam. There are many architectural remnants of an ancient temple of the sixth century overlying the ruins of another Shiva temple built of bricks during the Ahom period. Archaeological excavations done here in 1924 have unearthed a sixth century antiquity in the form of a stone door frame with extensive carvings. The ruins of the temple built during the Ahom period are built over the ancient temple's foundations and are in the form of a stone paved layout plan of the sanctum sanctorum and a mandapa. This complex is under the jurisdiction of the Archaeological Survey of India and its importance and notability is recorded under the Ancient Monuments and Archaeological Sites and Remains Act 1958.

The antiquities found at the Dah Parvatiya are inferred to have been from a temple complex built during the 5th or 6th century, prior to the Bhaskaravarman period. On the basis of the mouldings of the torso and its architectural style it is inferred that the terracotta plaques are definitely not later than the 6th century; the altered form of motifs noted in Assam confirms this assessment. This type of architectural feature, particularly in the molds of figurines of the ruins, is seen in North India, in the temples of the Bhumra and Nachha Kuthara which belonged to the Gupta period. Further confirmation of the dating is provided by the carvings of the river Goddesses Ganga and Yamuna, which are also akin to the Greek architecture with striking similarity to the Hellenistic art. The decorative elements of the ruins also have close similarity with those seen in the temples of Orissa. During the Ahom period, a Shiva temple was built with bricks over the ruins of an ancient Gupta period temple. When the Ahom period temple was destroyed during the Assam Earthquake of 1897, the remains of Gupta period temple were exposed but only in the form of a door frame made of stone. Epigraphic evidence and ancient literature found here, supplemented by the ruins seen scattered around the area, also confirms that in the pre-Ahom period Gupta art extended into the early Medieval period.

How to Reach Da Parbatia Temple

It is very easy to reach as it is located on the PWD road side Da parbatia. It is closest to the Amguri Railway Station and the Lokpriya Gopinath Bordoloi International Airport, Guwahati.