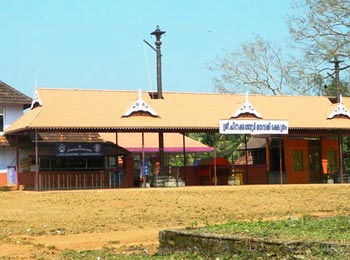 The Chinakkathur Bhagavathy Temple is dedicated to Shakti and is located in Palappuram, Kerala, India. The temple is in the middle of a huge ground where the Chinakkathoor pooram is conducted ever year.

The temple is one of the oldest Devi temples situated in Palappuram in Ottapalam Taluk. There are two sancta sanctorum (sreekovil) in the temple which is endowed with the presence of goddess Bhadrakali, namely thazhathe kaavu (lower shrine) and mele kaavu (upper shrine).

It is believed that King Zamorin ordered Land Lords to start the festival in Chinakkathoor in 18th Century. It can be seen that the Horseplay indicates the significance of Zamorin Dynasty (AD 825-1766). The heritage of Mamankam reflects the glorious past in the Horseplay.

Mamankam. (Mahamagham/Jubily) used to be praised once in twelve years on Makam day. In the old circumstances Perumal rulers were the specialist of this function. After the takeoff of last Perumal, the administration was taken by valluvanad King. Till twelfth century Valluvanad Kings were responsible for this celebration which was commended in Thirunavaya, the stream bank of Perar. Lord Zamorin of Kozhikkode vanquished Valluvanad King (Valluvakkonathiri) and caught the administration of Mamankam. Every single neighbourhood ruler and masters comprising war troops could take an interest in this celebration which would be praised for 28 days. Mr. William Loagan, who was the Collector of British Malabar, says that the last Mamankam was held in 1743. A suicide squad of Valluvanad comprising four rich warriors could challenge Zamorin for a war. Zamorin would sit in the War remain with the backup of 40,000 Nair Troops. Suicide squad having a place with the four families in particular Chenthrattil Panicker, Verkkottil panicker, Puthumana Panicker and Kolkkat Panicker who were the Nair chieftains would be prepared to battle against Zamorin's troop of Mamankam gallant and brilliant individuals of Valluvanad needed to play out their undying hunger for flexibility and fulfillment of making an insubordination to Zamorin. They realized that they would not come back to their families. A huge number of doomed contenders of Valluvnad had lost their lives amid this celebration.

Logan has outlined the Mamankam and the method for taking care of the general population by Zamorin which proceeded from twelfth century to eighteenth century in Malabar. He has additionally cited the expressions of Mr.Hamilton (New Account Page 306-308) about the stark substances occurred in the past period. In the Horseplay of Chinakkathoor, the name of fundamental stallion is Zamorin (Pandaarakuthira). They are controlling the war-like play of Horses. It is seen that there is a Horse to be specific Kochi Raja partaking in the Horseplay of Chinakkathoor.There were perpetual fights between the Kings of Kerala from twelfth century to eighteenth century. In any case, at any rate it might be noticed that Zamorin was the whole specialist of temple festivities in Malabar and furthermore in Kerala.

The Historian 'Mr. Whiteway' has said about the inviting war between the troops of Kerala Kings (Jaathi Vyavasthithiyum Kerala Charithravum-Pk. Balakrishnan, page.14). The war happens in sunshine as it were. There was no more separation between the spots of troops. The play begins in the wake of getting the flag of drum (Murasu). The Kuthira Panthi (Place of Horse troops) states that the above portrayal of Mr. Whiteway is precisely kept up in Horseplay of Chinakkathoor.

RS stuart says that the war-like play was directed in a stipulated put once in a year. Be that as it may, there were no hostility proceeded regarding this play. It is totally followed in Chinakkathoor.

How to Reach Chinnamariamman Temple