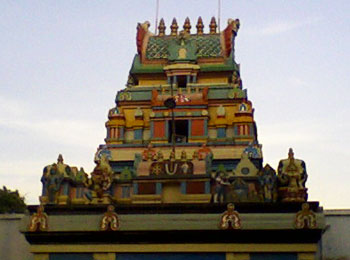 The Chilkur Balaji Temple is dedicated to Lord Vishnu and is located in Hyderabad, Andhra Pradesh, India. This temple is popularly known as the Visa temple because many devotees come here with the wish of going abroad and get their wishes fructify. This is one of the few temples in India which does not accept monetary donations.

Chilkur Balaji temple is one of the most famous temples in Hyderabad area. The nice concept that is implemented in darshan of the Lord Balaji is that all the devotees must stand in queue with utmost discipline. When people ask for wish from the God here, they have to do 11 pradakshinas and ask their wish with the witness of Lord Anjaneya. When the wish gets fulfilled, they need to do 108 pradakshinas. The 11 pradakshinas have a significant meaning according to the temple priests. When people wish anything from god, mind has to think about only god and one's self i.e., 11 signifies that god takes care of everybody and everybody should understand that.

Chilkur Balaji Temple popularly known as Visa Balaji Temple or Visa God is an ancient Hindu temple of Lord Balaji on the banks of Osman Sagar Lake near Hyderabad, India. It is 17 kilometres from Mehedipatnam. It is one of the oldest temples in Hyderabad built during the time of Madanna and Akkanna, the uncles of Bhakta Ramadas. The shrine is instrumental for the temple's popularity as Visa God. This temple does not accept any money, does not have a hundi, from the devotees, no green channel or privileges for VVIPs. The other such temple is the Jalaram temple in Virpur (Rajkot), Gujarat. This temple fought and won the right to stay out of government control. The only other such temple is ""Ramanuj Kot"", a temple in Jodhpur, Rajasthan. From the style, structure and appearance, it can be inferred that the temple was built half a millennium ago. Set in sylvan surroundings, Chilkur Balaji Temple attracts millions of pilgrims every year and is an ideal place for sequestered retreat and meditation. It enjoyed in the past, great days of pomp and glory. The temple is one of the oldest in Hyderabad, having been built during the time of Akkanna and Madanna, the uncles of Bhakta Ramdas.

The Principal deity in the temple is Lord Vishnu

According to tradition, a devotee who used to visit Tirupati every year could not do so on one occasion owing to serious ill health. Lord Venkateshwara appeared in his dream and said, "I am right here in the jungle nearby. You don't have to worry." The devotee at once moved to the place indicated by the Lord in the dream and saw a molehill there, which he dug up. Accidentally, the axe struck Lord Balaji's idol (covered by the molehill) below the chin and on the chest. Surprisingly blood started flowing profusely from the "wounds", flooding the ground and turning it scarlet. The devotee could not believe his eyes. He could not believe his ears when he heard a voice from the air saying, "Flood the molehill with cow's milk." When the devotee did so, a Swayambhu idol of Lord Balaji accompanied by Sridevi and Bhoodevi (a rare combination) was found, and this idol was installed with the due rites and a temple built for it. Sri Balaji Venkateshwara, the Pratyaksha Daiva in Kaliyuga, is thus available at Chilkur to shower blessings on His devotees who for any reason are unable to go to Tirupati. Many devout worshippers flock to the temple to receive the blessings of the Lord and his consorts throughout the year particularly during Poolangi, Annakota and Brahmothsavams. With the earnest desire to revive the former glory and importance of the temple, the idol of Ammavaru was installed in 1963, the year after the Sino Indian War. After the unilateral withdrawal of Chinese troops, Ammavaru was given the name of Rajya Lakshmi, signifying this welcome event. The unique feature of this idol is that lotus flowers are held in three hands and the fourth hand is in a position towards the lotus feet which signifies the doctrine of Saranagathi. The temple has been visited by great Acharyas from time to time. A visit to the temple is a must for the Jeer of Sri Ahobila Mutt every time he visits the twin cities, and in the temple is installed the idol of the first Jeer. The Tilakayaths of Sri Vallabhacharya Sampradaya have been regularly visiting the shrine. Jagadguru Sri Sankaracharya of Sringeri Mutt and his disciple graced the efforts of the trustees in improving the temple. During a visit the devotee goes through the usual rituals of prayer, including 11 circumambulations of the inner shrine, and makes a vow. Once the wish is fulfilled devotees then walk 108 times around the sanctum sanctorum. The majority of wishes by devotees are visa related, thus Chilkur Balaji is also referred to as 'Visa' Balaji. The 11 circumambulations represent the secret of creation, 11 means "1 soul and 1 body", uniting both with devotion and full determination to fulfill wish, dedicate on the lord, there is no second, everything is god. In the 108 circumambulations, 1 represents the Existence, Almighty, God (Paramathma, Balaji in the minds of the devotee), 0 represents Creation (Illusionary World, Jagath) and 8 represents Human Body need to come to this universe 8 months (Jivatma). The Chanting of following names of Lord Vishnu, immensely helps us in overcoming the obstacles in our daily life.

"Om Vashatkaaraaya Namaha" : For Success in Business; "Om Aksharaaya Namaha": For Success in Studies; "Om Bhuthabhavanaya Namaha" : For Good Health; and ""Om Paramaathmane Namaha"": For Self Confidence. Every devotee has to keep eyes open while doing darshan of God idol in the temple. God is everything, God does not want anything from devotees, God expects Devotion, Determination and Dedication from devotees.

He is called as “Visa God”

Begumpet Airport is just 20 km away from the Temple.

Lingampally Railway Station is the closest railway station about 14 km away from the Temple.