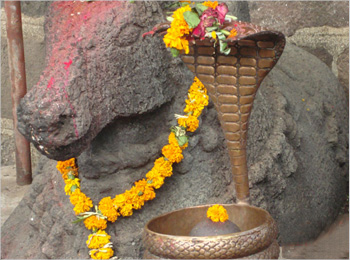 Maharashtra is located in the western part of the country and is the third largest state. It stands second in population among all Indian states. Surrounded by the Arabian Sea to its west, Chhattisgarh and Telangana to its East, Gujarat to its northwest, Madhya Pradesh to its north and Karnataka to its south, Maharashtra is 3,07,713 sq km in area.

Mumbai is the state and also financial of India. Nagpur is known as the second capital of the state. Also being the wealthiest state, Maharashtra contributes around 15% of the industrial output of the country and around 14% of its gross domestic product. The state has several wildlife sanctuaries, national parks, and patronizes project Tiger which is an attempt to preserve the endangered species like the Bengal tiger, only to conserve the bio-heritage of the country. Maharashtra has a tropical monsoon climate and the annual rainfall is between 400 mm - 6000 mm annually, with the Konkan areas receiving the maximum rainfall in the state. The average temperature varies in between 25- 27 degree Celsius in a year. With six administrative districts and five main regions, Maharashtra has 19 Rajya Sabha or Upper House seats and 48 Lok Sabha or Lower House seats. 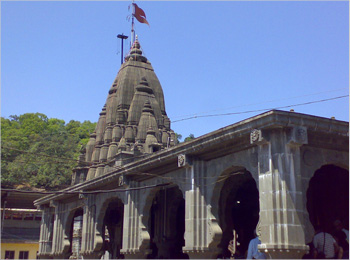 Bhimashankar is a very popular temple in Maharashtra. It is an ancient shrine and one of the 12 Jyotirlingas of Lord Shiva. It is located in Bhavagiri village, 50 km in the north west of Khed, near Pune. The temple is in between the Sahyadri mountainous range which is 110 kms from Pune City. River Bhima originates here, and from south east it flows south to meet Krishna river in Raichur. Other famous Jyotirlinga temples in Maharashtra are Triambakeshwar and Grishneshwar.

It’s the temple of Lord Shiva and there are legends to tell us about the construction of the temple. After Lord Shiva killed the demon Tripurasura, he killed Bhima, a demon. As he went to rest in Sahyadri mountain range on the request of all the Gods, his perspiration took the form of a river and came to be called as Bhimarathi.

Bhimashankara temple is an ancient temple which is reconstructed in 18th century, in Nagara style of architecture. Nana Phadnvis built the tower of the temple. The great Maratha King Chatrapati Shivaji Maharaj was an ardent devotee of Lord Shiva and did improvements to the temple structure from time to time. Drawing its similarity from other Shiva temples this temple too is in a lower area than the ground. 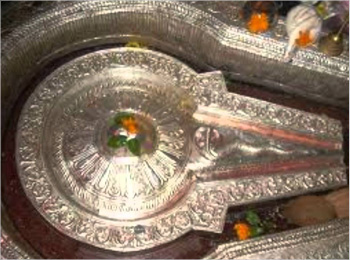 The presiding deity of this temple is Lord Bhimashankar (Lord Shiva), in the form of Lingam, which is said to be Swayambhu (self-emanated Shiva Lingam). The other shrines inside the temple complex are dedicated for Lord Saneeswara, and Nandi, the vehicle of Lord Shiva. Each Jyotirlinga temple takes different manifestation of Lord Shiva and the idol of Lingam is considered as a presiding deity in every Jyotirlinga temple. Lingam represents infinity, nature of Lord Shiva.
The pillars and frames of the doors of the temple are embellished with wonderful sculptures of divine personalities in human form. Bhimashankar Temple is constructed in Nagara style of architecture that proves the outstanding quality of sculptures achieved by the ancient Vishwakarma descendants. 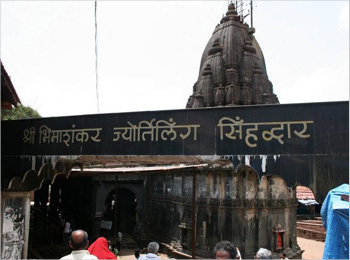 A very long time back, In the dense forests of Dakini , there was a demon called Bhima with his mother, Karkati. Asura Bhima was very ruthless and cruel and had no words and feelings like compassion and mercy in his dictionary and nature.Everybody was scared of him. Once he asked his mother about his existence and about his father. To this his mother replied that his father’s name was Kumbhakarna and he was killed by Lord Rama,an incarnation of Lord Vishnu. To this he was very infuriated with Lord Vishnu and vowed to avenge his father’s death. He did great penance of Lord Brahma and being pleased by him Lord Brahma gave him lot of supernatural powers which was big mistake. He created havoc everywhere disturbing all rishis and sadhus in their pious activities. He defeated King Indra and dethroned him. All this angered the gods and they went to Lord Shiva for help. Lord Shiva agreed to help them. Meanwhile demon Bhima had also defeated a staunch devotee of Lord Shiva – Kamarupeshwar, and put him in the dungeons. He then ordered Kamarupeshwara to worship him instead of Lord Shiva to which Kamarupeshwara denied. The shrewd and cruel Bhima raised his sword to strike the Shivalinga, to which king Kamarupeshwar was doing abhishek and pooja. As soon as Bhima raised his sword, Lord Shiva appeared before him in all his magnificence and lusture.

The terrible war began. Sage Narada appeared and requested Lord Shiva to put an end to this war. It was then that Lord Shiva reduced the evil demon to ashes and thus concluded the saga of tyranny. All the Gods and the holy sages present there requested Lord Shiva to make this place his abode. Lord Shiva thus manifested himself in the form of the Bhimashankar Jyotirlingam. It is believed that the sweat that poured forth from Lord Shiva’s body after the battle formed the Bhima river.

Mahashivaratri during March, is the greatest festival celebrated here.

To stay at Bhimashankar

Remember there are no hotels to stay in Bhimashankar . All you get is small Dharamshalas , that too are very shabby or else you can stay at someone’s house as a paying guest . For staying at hotels you have to go to Manchar which is 8 kms away.

The best season to visit Bhimashankar is in the winter season. The temperature remains comfortable and is apt for visiting the wildlife and other places of interest in Bhimashankar. The best months to visit are October, November, December, January, February and March.

Nearby Places To Visit

The distance is about 160 kms from Pune. Government MSRTC buses (no luxury) ply from Pune to Bhimashankar every 30 minutes from 5:30 am till 4:00 pm. You can get State Transport buses from Shivajinagar, Pune. The fare is Rs. 132 and it takes around 3–4 hours to reach there from Pune.