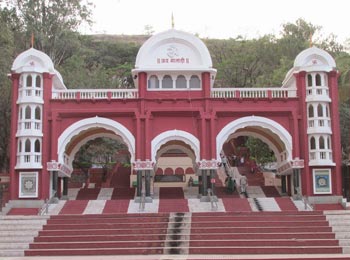 The Chattushringi temple is situated at the city of Pune in Maharashtra, India the deity goddess Chattushringi is regarded as the reigning deity of the Pune city. She is known by various other names such as Mahakalee, Mahalakshmee, Mahasaraswatee and Ambareshwari. This famous shrine is located amidst scenic view just on a hill slope, somewhere near the North-Western part of Pune. The temple is approximately 90 ft. high and 125 ft. wide and is managed by Shri Devi Chattushringi Mandir Trust.

There is a fascinating legend associated with this temple in Pune. Around 251 years ago, sometime during the Peshwa rule in the region, there was a money lender (saavakar) & mint owner of Peshwa named Durlabhsheth Pitambardas Mahajan. He was highly spiritual and was deeply devoted to Devi Saptashringee who graces from the Vani hills near Nasik. Every year, on the auspicious day of Chaitra Poornima (Full moon day), he travelled nearly 300 kms from Pune to Vani to worship the goddess.

As he grew old, it was becoming extremely difficult for him to travel till Vani to offer prayers to the goddess. With immense grief, he whole heartedly prayed the goddess, and conveyed his sorrows of not being able to visit her. The Devi who was moved by his devotion, goddess Saptashrungee appeared in his dream and told him that she herself would come to him since he cannot visit her anymore. She also informed him to come to a particular mountain situated in the North-West of Pune & dig the earth there. The devotee did as instructed and to his surprise found statue of goddess (swayambhu devi) there. Thus he built a temple for the deity there which over the time was renovated a few times. This is the renowned Chathurshringi temple that was initially built by the money lender. Sri Durlabhshethji also minted a Chattushringi rupee to celebrate this occasion. The temple became quite popular over the years. After Durlabhsheth, Late Sri Dastageer Gosavi and his disciples took over the temple administration. Later it changed hands to the Angal family who are performing all the daily rituals for the past five generations. Even during ancient times, people in and around Pune used to visit this temple seeking the blessings of Goddess Chattushringi. The Ashwini Poornima and Navarathri are the grandly celebrated festivals every year. Annual exhibitions and fairs are heels as part of the celebrations. The silver vigraha of the goddess in taken on procession in a silver chariot on the eve of Vijaya Dhasami (Dashahara).

As the number of devotees visiting the temple seems to be increasing every year, the temple management has decided to expand the temple. Therefore renowned designers and architect from Pune designed has come out with an efficient model to to develop the temple and its surroundings.

The hill on which this temple is built is already a serene location. The numerous statues and gardens surrounding the temple have in fact made the place even beautiful. One can also find many resting places dor devotees who climb the hill to reach the mandhir. Drinking water is also made available at through the route. Huge crowd throng the temple in special days of the Navaratri Fair every year. Proper arrangements are made to enable sulabh darshan and to manage efficiently manage the crowd.

The new temple buildings will have a nagarkhana, a waterfall, a drinking water tank, fountains, dharmashalas for staying over, the trustee-office and rest-rooms for the volunteers and security personnel. The development plan encompasses almost every aspect of the temple from darshan to stay at the place. Special darshans are also made available to the elderly and the disabled. Devotees have been so generous in offering donations to the temple, which has been the main source of fund for all the developmental activities undertaken by the temple management.

Navratri is the most important festival celebrated in this temple at Pune.

How To Reach Chattushringi Temple

The closest Airport is the Chatrapati shivaji international airport.

Located on Senapati Bapat Road, the place is well-connected through all modes of local transport like buses, taxis, etc.