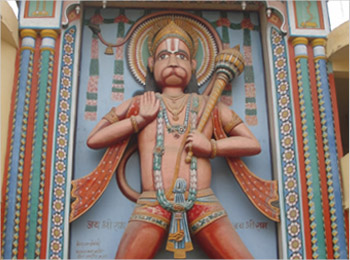 
15 feet height tall sculpture of Bade Hanuman is located at the entrance of Sri Bade Hanuman Temple; Ayodya, the holy city and birth place of Bhagwan Sri Ram, belongs to Faizabadh district in the Indian state of Uttar Pradesh. The temple is situated on Mani Ram Das Chavni Marg, Janki Ghat of Ayodya.


In reverence to Lord Hanuman, Mahant Sri Mani Ram Das established a temple for him in the middle of a pond called “Bindhu Sarovar”. The Temple is Hexagonal in shape and built on the elevated pillars in the middle of the Bindhu Sarovar. Huge idol of Bade Hanuman in standing posture is installed at the entrance and one has to pass through this idol to enter the temple. The square shaped tank has steps on the sides so that the devotees can bathe in the water.


The gigantic idol of Lord Sri Hanuman is a feast to the eyes. The idol is seen in a standing posture and is about fifteen feet high. The Lord is seen looking straight and his left hand is holding a ‘gadha’ (weapon) which is resting on his left shoulder. His right hand shows the ‘Abhaya’ mudra (gesture of hand) - assuring that He will protect those who come to serve Sri Rama. His head is decorated by a crown. His eyes are so made, that from whichever angle a person looks at Him it appears as if the Lord is looking at him directly.


Lucknow airport is the nearest airport at 150 km distance.


Ayodya has not developed an exact connection with the neighbouring cities. Still, one can get buses till the nearest bus station from Ayodya.