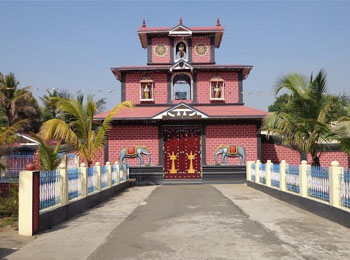 Bokaro, popularly called the Bokaro Steel city, is one of the major Industrial hubs of eastern India. Bokaro is a developed city in the Indian State of Jharkhand which is widely remains under developed. The Ayyappa Swamy temple in Bokaro caters to the spiritual and devotional need of the worshippers of Lord Ayyappa in and around the region. It is an ideal place that provides a spiritual ambience to pray and meditate. The Prathishta or installation of Lord Ayyappa’s idol inside the temple was performed on the 11th of July,1983.

The main temple is devoted to Lord Ayyappa who is also called Sri Dharma Sastha. The temple has separate sanctums for other deities such as Lord Siva, Lord Vishnu, Lord Ganesha, Lord Kartikeya, Goddess Bhagavati, Lord Ram & Devi Sita, and Anjeneya Swamy. Smaller shrines of Nagaraja, Nagayakshi and the Navagraha are also found inside the temple premises. Sri Kandararu Parameswararu and Sri Kandararu Maheswararu of Tazhamon Mathom, who are the traditional priests of Sabarimala Ayyappa Swamy Temple had performed the Prana Pratishta in accordance to various Sastras. The annual Mahotsava of the temple is celebrated every year under their abled guidance.

The following are the list of festivals that are celebrated in this temple.

How To Reach Bokaro

The Ranchi Airport is situated at a distance of 120 km from Bokaro and is the nearest airport. One can reach Bokaro by hiring a cab or getting a bus from Ranchi.

Bokaro is a major rail head in the eastern railway link. Hence Bokaro is well connected with various major cities around the country.

Bokaro city has well developed roadways. Being an major industrial hub in Jharkhand, it is located right at the meeting point of NH 23 and NH 32 which connect it to cities like Ranchi and Jamshedpur. It also connected by various state highways to other parts of the state. Public and private buses ply frequent services from Bokaro every day.