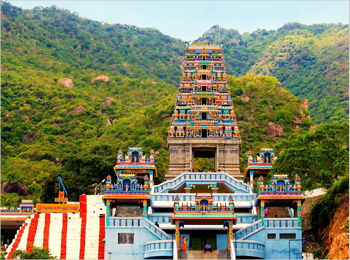 The Arulmigu Subramanya Swami Temple is located in Marudhamalai, Coimbatore, India and is dedicated to God Muruga. Like most God Muruga temples, this temple too is located on a hillock. It forms a part of the Western Ghats. The temple is situated on the foothills. There is a temple for Lord Ganesha, where the idol is called the "Thaan thondri Vinaayakar". There is a cave that is called the "Paambaatti Sitthar Kugai" dedicated to a Sitthar who lived here. The Temple is said to belong to the 12th century. Stone inscriptions dating back to the 12th Century contain words such as Marudhan and Marudhachalam, which reveal that the names were in vogue even then. 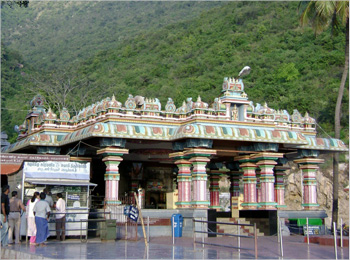 The temple is situated at a height of 500 feet on Marudhamalai hills. This is one of the six main abodes of the lord. The deity is seen to be magnificently mounted on his vehicle, which is a peacock. The Pambatti Siddhar Cave is another shrine that is located on the slopes, towards the east. Legend records that Pambatti Siddhar used this cave as an abode for meditation on Lord Muruga and attained salvation here. One can notice a natural image of a snake on the rock. There are springs that have holy water. They are named Marudha Theertham and Skanda Theertham. A dip in these springs brings forth health and wealth to devotees. The Marudham tree is the sthala vriksham. 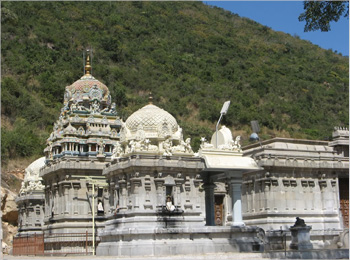 God Muruga is known as the God of the mountains. The word Muruga has several connotations such as youthfulness, divinity, honey, sweetness, beauty and such else. The Lord reigns supreme in His radiance and is seen exuding grace and charm. The idol is crafted out of granite and is about three feet in height. The idol has a close resemblance to the deity and defies descriptions and is more a thing to be experienced than heard of. The image bears a close resemblance to the deity at Palani. The statue at the sanctum sanctorum, divested of all its adornments, loined with a slender cloth brings to our mind the ‘Andi Kolam’, the aspect of a mendicant assumed by the God in Palani. What distinguishes Marudhamalai Andavar from Palani Ândavar is the sporting of a turban on the head with a tuft behind. The beauty of the deity defies all description and is more a thing to be experienced than expressed. 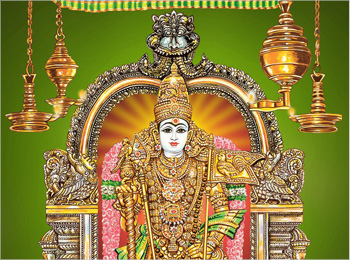 Lord Muruga is glorified as the God of mountain and mountainous regions in Thiru Mugurugatrupadi, a noted work of the Tamil Literature of the Sangam Age. The word Muruga is a comprehensive term, connoting several meanings such as sweetness, youthfulness, beauty, divinity and honey and therefore it is but natural for the Lord to have His abode amidst scenic beauty among hills and mountains. Situated at a height of about 500 feet in a plateau on the western ghats, fifteen kilometres north west of coimbatore, amidst lush vegetation and salubrious climate, marudhamalai hills, dedicated to lord muruga (Maruthachalamoorthy) is classified under kunruthoradal, one of the six main abodes of the god, the others being Thiruparangunram, (near madurai), thiruveragam (Swamimalai) , Thiruvavinankudi (Palani), Thirucheeralavai (Thiruchendur), and Pazhamudhirsolai (Azhagarkoil near madurai) and Thiruthani. Set against the backdrop of hazy blue hills dotted with shrubs and bushes of varied hues, the sacred shrine verily reflects the picture of Lord Muruga, magnificently mounted on his vehicle peacock, flaunting and swaying its feathers and plume in full bloom.

The hoary past of the temple can be traced in such ancient works as Sage Kachyapar's PERUR PURANAM. The origin of the temple is rooted in legendary antiquity and dates back to the age of Surapadama, the demon destroyed by Lord Subramanya referred to in SKANDAPURNAM. The inscriptions found in Thirumuruganathaswami Temple, Thirumurganpoondi places the origin of the temple in the 12th century A.D.According to Perur puranam, Soorapadama, the scourge of the gods aided by his mighty brothers, Singamukha and Tharaka arrayed against them and struck terror in their already agitated minds by his sudden and surprising charges and depredations. Unable to bear the agony and anguish, the gods approached Lord Siva and sought His succour. Lord Siva comforted the Gods that Lord Muruga would come to their rescue, root out and destroy Surapadama and his retinue enmasse. The gods hastened to the Marudhamalai Hills and await the advent of Lord Muruga, their Saviour! Perur puranam also alludes to a king called Kusathvajan, who, it is said, was blessed with a male issue, only after worshipping Marudhamalai Muruga.The Divine Cow Kamadhenu is reported to have grazed in the pastures of the hills of Marudhamalai.Perurpuranam lists the three neighbouring hills, vellingiri, Nili and Marudhamalai as the very manifestations of Lord Siva, Parvathi and Subramanya respectively and the three hills taken together as the very symbol of Somaskanda. 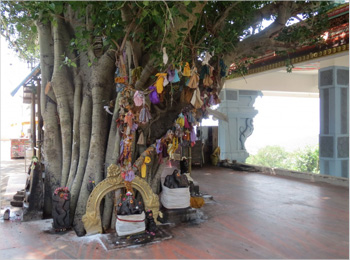 In Murugan Temples all over the world Poojas, worships and prayers are conducted daily following a routine, in the morning, noon, evening and night, which devotees attend with offerings to the Lord. Apart from the daily Poojas, special auspicious festivals are also conducted in the temples annually, almost every month, starting from the Tamil calendar month of Chitrai, which is from middle of April to the middle of the following month May, consequently every month till end of each Tamil year. This monthly festivals is conducted on the day in which the particular star occurs in that month. These special festivals begin early in the morning, with special abishegams followed by poojas and offerings throughout the day, and culminate with a procession all over the town with the Lord in a charriot illuminated with colorful lights, accompanied by

(1) Various types of musical instruments played by experts,
(2) Priests chanting Vedas,
(3) Othuvars (reciters) reciting devotional songs in Tamil and
(4) Multitude of devotees, the charriot returning to the Temple in the midnight or at dusk.

Sacared ash and theertham (scared fragrant water) and flowers are offered by the priests with the Lord's blessings to the devotees all through this occasion. Such special festivals are conducted as hereunder:

Between April 14th to May 13th

This is a Full moon day festival in the first Tamil month Chittirai (between April 14th to May 13th). Devotees observe fasting, worship God Murugan and break fast the next morning. This light [brilliance of the Poorna Chandra (full moon)] helps dispelling darkness to the souls. So Murugan worship and festival start on this day in the first Tamil month of the Tamil year. Similar celebrations as stated above take place in many Murugan temples.

Vaigasi is the second Tamil month in the year (May 14th to June 14th). Vaigasi is the 16th star. Lord Murugan is also called Visagan.

Aadi is the fourth month in the Tamil year (16th July to 16th August). Krithigai is the third star. After pooja and prayer, devotees are provided lunch in the noon.

Ippasi is the seventh month in the Tamil year (17th October to 15th November). Sashti is the sixth day after the new moon day (Amavasai Day). It is on this Sashti day the six faced Lord Subramaniyam annihilated Soorabanman the most atrocious Asuran, who imprisoned the Devas, and the Devas were liberated by the Lord. So this festival is celebrated in all Murugan Temples in the world and specially in a very grand manner at Thiruchenthur Temple beside the seaside in Thiruchenthur, Tamil Nadu. Multitude of devotees attend this festival taking place there for seven days, culminating with the sangaram (destruction of all evils) and bestowing of the Lord's grace and blessing to liberated souls.

Karthigai is the eighth month in the Tamil year (16th November to 15th December). Thirukarthigai is the third star in the Tamil month. This festival is celebrated in all Murugan Temples all over the world and specially in a very grand manner at Thiru Annamalai Hill Temple in Tamil Nadu. In that evening special Deepa (fire which is called the "sacred thituchudar" in which from Lord Siva appeared in the sky) is placed on the hill top,Braman (God of creation) and Vishnu (Thirumal God of protection) vainly tried to trace the head and foot of that Fire and failed in their efforts. Multitude of devotees including the heads of the scared Mutts of Tamil Nadu which spread spiritualism among people in India and abroad witness this grand festival at Thiruvannamalai and attain the Grace and blessings of Lord Siva. At that night series of small lamps are lit in all Murugan Temples, and Bon Fire (called Sockappan) is lit in the compound of each temple celebrating the victory of the Lord.

Thai is the tenth month in the Tamil year. (14th January to 13th February). Pusam is the eighth star in the Tamil month. This festival is celebrated in all Murugan temples all over the world and specially in a very grand manner at Palani Hill Temple in Tamil Nadu, Penang Hill and Waterfall Temple at Penang, Batu Caves Temple in Kuala Lumpur, Malaysia and Singapore Temple. In this festival also Lord Subramaniyam comes in procession in silver charriot. Multitude of devotees attend this festival observing fasting and penance and carrying out special prayers, offering Abishega materials, garlands, fruits etc to Lord Subramaniyam and carrying Kavadies in their shoulders, to the Lord up the hill to obtain the Lord's Grace and blessings and become cured of their disabilities, ill health, diseases, troubles etc.

The holy shrine of Marudhamalai is believed to remove both physical and mental afflictions and attachments as the hill abounds in Medicinal herbs. The holy cow 'Kamadhenu' is believed to have grazed in the pastures of this hillock and drunk from the springs under the Marudham tree as per Perur Puranam written by Kashyapa Munivar.

This temple is visited by devotees for wedding issues, child boon and prosperity

Peelamedu airport is 10-km from Coimbatore.

Coimbatore is well connected by rail with the important places within and beyond the state.