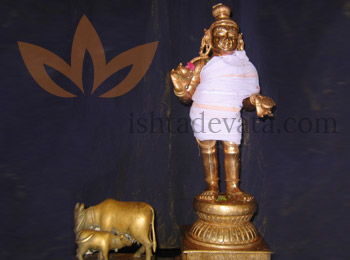 The temple is on the top of the Gobinathaswamy Hill in the Kamatchipuram village. The temple is conical shape and the river Mangarai is at the bottom of the Hill. This adds to the beauty of the location.The temple is located in the Height of 1300 feet from the Sea level and 450 feet from the Ground level.In days of yore, this was just a small temple in a forest-like place on the hill worshipped by shepherds and villagers in the place. The hill is called Gopinathan Malai (Malai-hill) from where the Lord graces the devotees fulfilling their prayers

In 13th century Bellary, Andhra was ruled by King Vallala. During his rule there was terrible drought for lack of rain. The King had Koppammal his wife and Gobinathan his son they had a large number of Cows. A hungry Brahmin came to King and requested the King quench his hunger. The King narrated the drought condition of his Land and then with high difficulty he provided food to the Brahmin. The Brahmin explains to the King about to the water facilities, the fertile lands, and the fertile hill regions in the state of Pandiyas. He explained again to the King if he went to the Pandias state with the cows the King could lead a prosperous life. Then the Brahmin continued his holy journey.

After King Vallala, as directed by the Brahmin Gobinathan and his mother Koppammal along with the cows and servants marched towards the Pandias State. When he reached Pandias State he stayed with his Cows at the bottom of a Hill near Reddiarchatram. This hill and the surrounding full of green meadows and thick forest with abundant water and fertile land. The cows did not go anywhere but they sought their food in and around to the Hill. As they respected the cows they all stayed in the same place and protected the cows.

After a few years there was no rain even here. They decided to leave this place but Gobinathan did not have the mind to leave the place and came to a decision. They expected rain must pour and they must be flood in the river. He prayed to God that he would sacrifice his and after his life if God could eradicate the drought condition and provide grass for his cows. This was his sincere prayer and also a command to the God. In the same night there was heavy rain and grass everywhere around the Hill as food for the cows. In the river water was flowing continuously and everybody became happy including Gobinathan.

One day the vow he made to God came to his mind. He observed all the cows that were grazing among the Hill with his affectionate eyes his stopped his music. He decided that there was no opportunity further to play his flute and see the Cows. Then he placed his flute at the bottom of a Neem Tree and tied a Salagai Bull at the Tree and he climbed up. There was the lowing sound of 'Amma Amma' around the Hill. His mother Koppammal, as it was the time for the lunch carried the food to the Hill. When she heard the lowing of the cows she went near the Neem tree. She saw a Bull was tied to it. The Bulls horns and the face was full of blood. On the horns of the Bull intestines were hanging. His mother understood that his son climbed the Tree and committed suicide by falling on the horns of the Bull. It was a shock at all the cattle with the tears in the eyes shouted Amma Amma.

When the mother saw this she fainted and died. Her Athma also mingled with her sons Athma at the feet of the God. All the Cows wandered around the Hill. After many years the Zamindar of Kannivadi was ruling his Zamin(Parish) came to this Hill for hunting. The Zamindars Cows could not walk further and lay down. All the cows appeared, as deers but the Zamindar could not hunt. He returned to this place by bullock cart. Next day he invited the foreteller and he narrated all the incidents of the Hill. One day at dusk a Chithar appeared before Zamindar and confirmed all the incidents of the Hill.

At the top of the Hill God Gobinathan appears and blesses all the devotees. The Chithar also informed that the God in order to bless the Zamindar stopped his carts and cattle. He also showed the herd of cows the God loved cows so the Chithar advised the Zamindar to offer Cows as his might. He must also conduct regular poojas and festivals after erecting the idol. He must also build a temple there. He and his cows might get the blessings of the God after conducting all these to achieve this he must bring the holy water from the Hill and sprinkle the water throughout his land and all the living beings. If he did so he would get blessings of the God.

The Zamindar left a number of Cows as his offering in the Hill. After this, Bulls, Cows, and wealth increased a lot in the Zamin by the blessing of the God. After sometime the Zamindar built the idol of Gobinathan as playing the flute under the Neem Tree. He also built a statue of Koppammal as carrying the lunch for her son Gobinathan on her head. As Gobinathan incarnated as statue on the Hill, it is called as Gobinathan Hill.

Arulmigu Gobinathaswamy is worshipped as God of all the animals. On every Saturday thousands of farmers and those who possess milking Cows offer milk for Abhishekam in the temple. Thousands of liters of milk are offered to worship the God on the day of 'Thai Pongal' and 'Mattu Pongal'.

On the Earth at the end of the Dwabarayugam the protecting Kings of the people changed themselves into Asura and Arakas. They began to torture the just and the Sathus. The Devas and the saints pleaded at the God to protect Devas as shepherds, the Deva women as Shepherdesses. He changed the saints as Cows. In the month of Avani under the star Rohini in Astami thithi, Kannan was born as the head of the shepherds.

At the time of the birth he showed the whole world to his mother. He destroyed all the Asuras named Boothan, Sukarasuran, Bagasuran, Agasuran, Varusapasuran, Vatchasuram, Thenmugan and Blamban. He put down the atrocities of Kalian. In order to block he stoned rain he took the 'Kovarthana Hill' and protected the shepherds and the cattle. He attracted the birds the animals and the Gobiars by his melodious flute music.

He appeared as a Kannan for a Gopiar thus he appeared for five lakhs Gopiar as five lakh Kannan and danced along with them. He stole butter in the houses of Gopiars he broke the Pots. He made the Gopiars to cry. On observing his wanders Brahma, Indiran and the Devas worshipped him.

One day Kannan and his friends were grazing the Cows, and Calves. Brahman ignoring Kannan he hid the Cows and friends. At the time of lunch Kannan wanted to eat his food along with his friends but nobody was there he searched everywhere and could not find them. So he changed himself as Cows and Calves. He also changed himself as the child Gopalan. Brahma understood the godliness of Kannan and worshipped him at these feet.

The Gobiars very easily understood the godliness of Kannan than Brahman. So all the Gobiars deserted their relatives, husband, children, cows and houses and joined with Kannan. They took asylum at Kannan considering him as their God and husband. They always surrounded him. They proved the fact that Kannan was all-powerful and God of all Athma.

That is why Kannan became Gobinathan. The activities of Kannan at his birth are enacted on the top of the Hill. And he is established as the worshipping God and the devotees are attracted by these activities. Even today the devotees enjoyed the wonders of the Gods. The diseases of the cattle are cured when the devotees worship Gobinathan. The barren cows beget calves. If milk abishekam is conducted there will be abundant yielding of milk. If the cows happen not to eat anything a little water and a handful of grass taken from the Hill are given to the Cows. Then they eat well.

Every Saturday including Saturdays in the month of Purattasi (September-October) and Pongal falling almost on January 14, are festival days in the temple with special pujas. On the Krishna Jayanti day (Lord Krishna’s birthday in August-September) in Avani Tamil month, Lord graces darshan very handsomely wearing all the ornaments.

Lord graces all those seeking child boon and transfers of job places and boons of their choice, protecting the cattle.

The nearest Airport is at Madurai.

Reddiarchatramchatram is on the Dindigul-Palani road. The temple is 3 km from Reddiarchatram at Kamakshipuam village on a hill of a triangular shape.