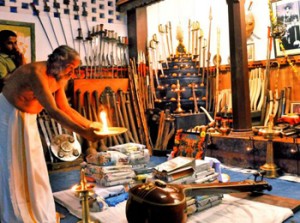 The third day of Saraswati Puja during Navratri is known as Saraswati Balidan day.

Balidan on Maha Navami should always be done on Uday Vyapini Navami. According to Nirnaysindhu, the best time to perform Balidan is Aparahna Kala.

Historically Ayudha Puja was meant to worship weapons but in its present form all sort of instruments are worshipped on the very same day. In South India it is a day when craftsmen worship their tools and instruments similar to Vishwakarma Puja in other parts of India.

In its modern form Ayudha Puja has become Vahana Puja when people worship their vehicles including cars, scooters, and motor bikes. During Vahana Puja all sort of vehicles, which are in use, are decorated with vermilion, garlands, mango leaves and banana sapling and worshipped. Most significantly during Vahana Puja a white pumpkin is decorated with vermilion and turmeric and smashed in front of the vehicle as a custom to get rid of all sorts of evils.

In South India most calendars mark Saraswati Puja along with Ayudha Puja. However according to most Dharma Shastras Saraswati Puja during Navratri is suggested during Purva Ashadha Nakshatra.

In South India, Saraswati Puja is done on the last day of Navratri and it is observed on the same day as Ayudha Puja. On the next day of Saraswati Puja children between the age of 4 and 5 go through Vidyarambham ceremony.

However in the Northern and the Western India, Goddess Saraswati is worshipped for four days during Navratri. The Puja starts with Saraswati Avahan which is followed by Saraswati Puja, Saraswati Balidan and Saraswati Visarjan.