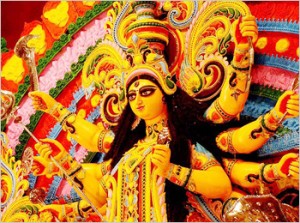 Mahanavami is third and final day of Durga Puja. Durga Puja on Maha Navami begins with Mahasnan and Shodashopachar Puja. On Maha Navami Goddess Durga is worshipped as Mahisasuramardini which means the Annihilator of the Buffalo Demon. It is believed that on Maha Navami day Durga killed the demon Mahishasura.

However Durga Balidan is always done on Uday Vyapini Navami Tithi. According to Nirnaysindhu the most appropriate time to perform Balidan on Navami is Aparahna Kaal. Navami Homa is performed on Maha Navami and it is the significant ritual during Durga Puja. The best time to perform Homa is at the end of Navami Puja.