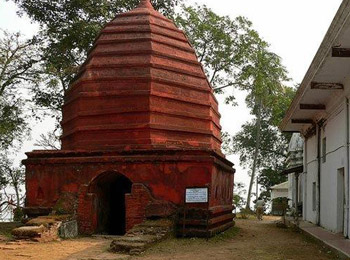 Umanandha Temple is a Shiva temple located at Peacock Island in the middle of river Brahmaputra. It was built by the King Gadadhar Singha (1681–1696), who was a devout Saivaite.

It is known as smallest inhabited island in the world. The country boats that are available on the banks of Brahmaputra take us to the island. The mountain on which the temple is located is known as Bhasmacala.

The temple has some rock-cut figures. The sculptures here show that the people there followed all the Hindu gods. Representations of Surya, Ganesh, Shiva and Devi in addition to those of Vishnu and his ten incarnations are found here. The shrine is reached by a flight of steps. The presiding deity of the temple is Umanandha. It is believed that, worshipping here on the Amavasya (new moon) day when it falls on Monday brings the highest bliss. The Shiva Chaturdasi is the most colourful festival that is held here annually.

Shiva is said to have resided here in the form of Bhayanandha. According to the Kalika Purana, in the beginning of the creation Shiva sprinkled ashes at this place and imparted knowledge to Parvathi (his consort). It is believed that, when Shiva was in meditation on this hillock, Kamadev interrupted his yoga and was burnt to ashes by the fire of Shiva’s anger and hence the hillock got the name Bhasmacala.

This mountain is also called Bhasmakuta. Kalika Purana states that Urvashikunda is situated here and here resides the goddess Urvashi who brings nectar for the enjoyment of Kamakhya and hence the island got the name Urvashi Island.

The Umanandha Temple was built in 1694 by Bar Phukan Garhganya Handique on the order of the King Gadadhar Singha who was the strongest ruler of Ahom dynasty. An earthquake destroyed the original temple in 1897. Later, Umanandha Temple was reconstructed by some rich merchant. He inscribed the interior part of the Shiva temple with Vaishnavite slogans. When Mughals occupied the region of Kamaroopa, land, men and money were given to the priests of Umanandha Temples from Mughal Emperors Jahangir and Aurangzeb and they used this to reconstruct totally.

Another legend states that Shiva lived here much to the Anandha (joy) of his consort Uma (Parvati) hence the name. Umanandha is the presiding deity of the temple.

Every year, many devotees come to the Umanandha Temple during the yearly occasion of Shivrathri. On this occasion, many visit the Peacock Island to seek the blessings of Lord Shiva.

Many devotees visit the temple and perform Poojas for Lord Shiva on Shivrathri. This includes decoration in the temple and arrangement for worship as well as Prasad (offering). The devotees celebrate and offer special Bhoga (food offered to the deity) and fruits as well as flowers.

They perform special Bhajans (religious music) and foods that are the favourite of Lord Shiva are consumed on this day.

The nearest airport from the temple is at Guwahati.

The railway line closest to the temple is at Guwahati.

Guwahati is well connected to all the major cities through roadways.