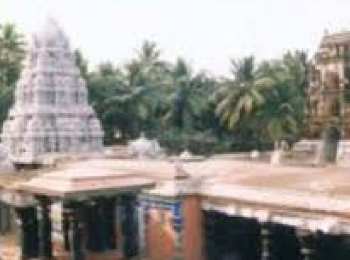 This temple located in Palivelaa in East Godavari district. There was a Shiva Temple who was called Lord Agasteshwara Swami which was installed by Sage Agasthya which later came to be known as Uma Koppulingeshwara Swami.

Shri Koppulingeshwara Swami appears with the Goddess Uma Devi on the same "peetham” (platform) in this Temple. On the right side of the sanctum, the idol of Shri Vigneshwara Swami has been installed. There are 2 mandapams (halls) here in this Temple which are Kaylana Mandapam, and Nandi Mandapam. Nearby, there is a small pond also for performing poojas to the Lord.

For this, king asked him to show him the hair around the Shiva lingam. The priest then said as it was already afternoon and the pooja being over, the Lord already being decorated with Nagabharana (ornaments) couldn't be taken till morning and added that he would show the Lord’s hair the next day. The King agreed to this and said that if the priest didn’t show him the hair of the Lingam, he would be beheaded. Terrified, he priest wept before the Lord all night and confessed his sin. He started beating his head on the Lingam of the Lord and fainted.

Lord Shiva, to fulfil the wish of the priest, wore his hair around his head. The fainted priest regained consciousness and saw the Lord with the hair. But no one believed in the words of the priest. The King then ordered the priest to pluck a hair of the Lord and show him which the priest did so. The King could see blood on the plucked hair. Immediately the King lost his eyesight. The King realised his mistake and prayed Lord to pardon him. The benevolent Lord took pity on the King and restored his eyesight.

Every year the following festivals are celebrated with pomp and show:

Hyderabad, Thirupati, Vishakhapatnam, Rajahmundry and Vijayawada are the other airports in Andhra that connect the state to other parts of the country.