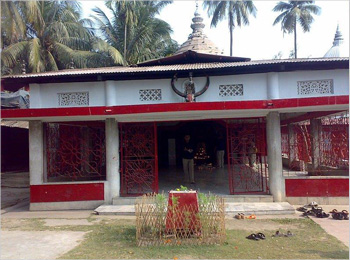 Ughro Tara Temple is a temple dedicated to Devi located in the western side of Jor Pukhury tanks in the heart of Guwahati city in the Latasil locality, Assam. The Ughratara Temple is an important Shakti shrine. 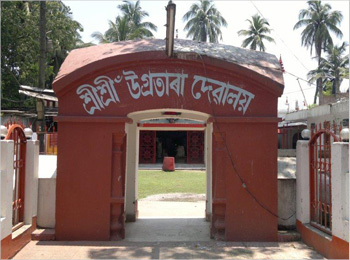 In the garbhagriha (sanctum) of Ughra Tara there is no image or idol of her. A pit of water is considered as the Goddess. The temple of Ughra Tara is small and beautiful to view. There is a Shiva Temple beside Ughra Tara temple and a pond behind both.

According to legend, the navel of Sati, first consort of Shiva, is related to this temple. The present temple of Ughra Tara was built by King Siva Singha in 1725. A tank, known as Jorepukhuri, is situated to the east of the temple. The tank still exists and was rebuilt by a private citizen.

Once upon a time, Lord Yama (Lord of the Hell) made a complaint to Lord Brahma that nobody comes to Hell from Kamarupa because of the sacredness of the area, despite doing sins. Lord Brahma carried this complaint to Lord Vishnu. Lord Vishnu took them to Lord Shiva. Lord Shiva ordered Goddess Ughra Tara to drive away all the people who were living in Kamakhya. She sent her army.

In the course of this drive, they laid their hands on Sage Vasishta who was meditating on Lord Shiva at Sandhyachal. Vasishta became angry and cursed Ughra Tara and Lord Shiva. From then onwards Ughra Tara became a Goddess.

The main festival celebrated in Ughratara temple is Navarathri. Devotees from far and wide come to offer their prayers and seek blessings of the Goddess. An important ritual is the sacrifice of animals. There is another ritual of offering one’s own blood to the Goddess.

Guwahati is linked to all the major cities of India by air.

Rail lines are well laid to connect Guwahati with other major cities.

Roads are well laid to connect Guwahati with other major cities.