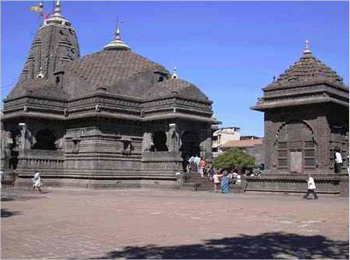 Triambakeshwar temple of Lord Shiva is located in Nashik city of Maharashtra, India. Maharashtra means the great state or the great nation. On the other hand, it is also derived from the word rathi, meaning chariot driver. As the state was well known for the drivers and builders of chariots who were known as 'maharathis' or 'Fighting Force'. In size it is one of the largest states in India with 308000 km² and population over 78,937,000. The state's official language is Marathi. 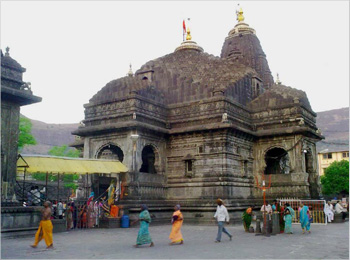 Triambakeshwar temple is one of the holy places of not just in Maharashtra but in entire India. It is one of the twelve Jyotirlingaas of Lord Shiva.There is a verse that says anybody who visits Trimbakeshwar attains salvation. There is no sacred place like Trimbakeshwar, no river like Godavari and no mountain like Bramhagiri. The reason being there are many attributes to this place ; they are this is the place of first Nath of Nath Sampradaya like Gorakhnath and others, where siblings of Nivrattinath attained self realisation, river Godavari originates from this place and it's also the birth place of Lord Ganesha- Tri Sandhya Gayatri. This is the holiest place to perform Shradha ceremony like Narayan nagbali As per Nirnaya Sindhu - a religious book of Hindus.

This temple is built by Shri Nana Saheb Peshawa in 1755-1786 AD .It is built with black stone and the Shivlingam is said to be a swayambhu one that is originated on its own without any human intervention. The temple is surrounded by a stone wall of 20-25 feet high. 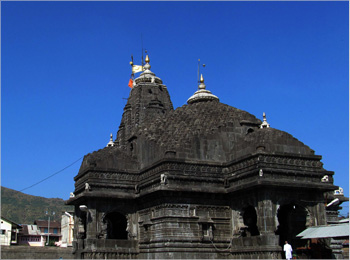 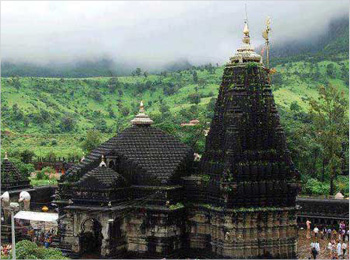 The legend of the place goes like this; at the time of the marriage of Lord Shiva with Goddess Parvati, all the Devarshis gathered together. God Bramha, the creator of the Universe, was attracted to the bride and discharged semen accidentally. Observing this Lord Shiva offered Bramha holy water of Ganga and said “you can wipe off your sin by this holy water". Lord Bramha took the water and put it in his pot ( kamandalu) and was purified by its bath.

Religious festivals at Trimbakeshwar temple are:

Nivruttinath Sinhastha Kumbha Mela - Once in twelve years when planet Bruhaspati or Jupiter is in Sinha Rashi (zodiac sign Leo)
Godavari day - In the month of February (Magha maasa) - the first twelve days of bright moon.
Nivrutti Natha festival - three days in the month of January that is Pausha maasa.
Mahashivaratri - on the 13th day of Krishna paksha in Magha maasa, that falls in the month of March.
Rathayatra of Trimbakeshwar ( Tripuri Paurnima) - On the full moon day in Kartika maasa in November. 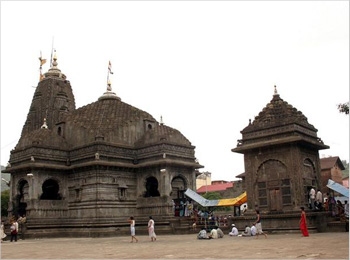 Since the place is bestowed with powerful presence of three Gods, it is said that anyone who worships all the three gods at once is sure to obtain salvation from worldly sufferings. The Trimbakeshwar temple was built in the Brahmagiri region on the banks of River Godavari. The shrine is carved in black stone with inscriptions dating back to the reign time of the Maratha kingdom. The Trimbakeshwar temple is said to be one of the most important temples in India and is frequently visited by Hindu pilgrims. The best time to visit this place is during the festival of Mahashivaratri.

Kushavarta is the place from where river Godavari originates. It is believed that a dip in this sacred river wipes off all the sins. The sage Gautam committed a sin of murdering a cow and by taking bath in this river, wiped off his sin.

Nearest railway station is Nashik Road station that is 44 kms away in Central Railway.