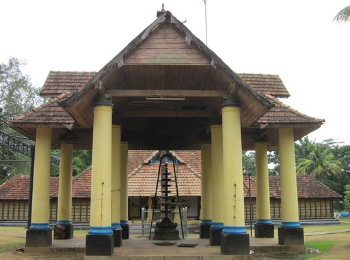 Thrikkakara Temple is dedicated to Lord Vamana an avathara of Lord Vishnu. It is located in Thrikkakara, a village near Kochi, in the state of Kerala. It is at a distance of 10 km North East of Ernakulam between Thrissur Ernakulam highway (NH 47), Seaport Airport Road, Cochin University of Science and Technology and Model Engineering College. The temple has many inscriptions highlighting its historic connotation. Many Tamil Vaishnavite Alwars, mainly Nammalvar around 7th to 9th century have sung hymns which have a mention of this temple. It is one of the 108 divine Divya Desams, whih are considered highly important for Vaishnavas. The sanctum sanctorum of the main shrine has the idol of Maha Vishnu. The temple is maintained by Travancore Devaswom Board. 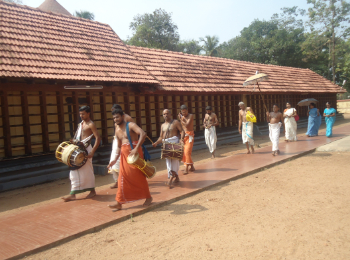 Vamanamoorthy Temple is of great mythological importance. Most number of stone inscriptions was found in this temple amongst Kerala temples. There are about 18 important stone inscriptions dating back to 10-13 A.D in the temple of Thrikkakkara Vamana temple.The inscriptions which were published in the Travancore Archeological Series in 1916 by Mr. T.A. Gopinatha Rao (1916) and Mr. K.V. Subramania Iyer (1923) are in Vattezhuthu, the prototype of Malayalam. Thrikkakkara or Thirukalkarai, as it was known in the days of the Kulasekharas, was the capital of Kalkarainadu, a fiefdom under the Kulasekharas, it is believed. But there is no written proof.


From the Thrikkakkara edicts appears a picture of the Kulasekhara empire which existed till about 1102 A.D., as well as the socio-political and religious milieu of the times. It is believed that Kalakarainadu constituted the present Thrikkakkara, Edappally and surrounding areas. The names of a few chieftains appointed as naduvazhis of Kalkarainadu by the Kulasekhara kings who ruled from their capital Mahodayapuram are mentioned in the inscriptions most of which were written during the reign of the Kulasekhara kings Indukothai Varma (944 - 962) and Bhaskara Ravi Varman I (963 - 1019). One record also mentions the existence of Arunoottuvar or the 'Group of 600' who aided and controlled the naduvazhis. During the rule of Kulasekharas, who were great contributors (and followers) of Vaishnavism, Hindu temples throve in Kerala. Thrikkakkara was a major recipient of this royal patronage as can be understood from the carvings which has reference to generous contribution made to the temple. By the turn of this century, Thrikkakkara Temple was in complete ruins with only the Adhishtana remaining. All the standing edifices were dilapidated and the idol of the deity was also damaged. After repeated requests from the Vaishnavaites and the report of the Archeology Department, the Maharaja of Travancore reconstructed the temple in its current form. Remnants of the old temple wall described by Nammalvar as 'kodimathil' can still be traced beneath the new construction and the pathway around the temple. The Thrikkakkara Temple that dates back to early times has no indication whatsoever about the Namboodiris, the community that held influence over Kerala after the arrival of Hinduism. Neither is Edappally Swaroopam, the former principality with a Namboodiri ruler that had adjoined Kochi and had played a major historical role in Kerala, mentioned in the records. The temple and inscriptions might be older than the emergence of Namboodiris as a force and the formation of Edappally Swaroopam. But later the ruler of Edappally became the authorized priest there and till recently held the right to nominate the priest. The engravings describe the festivity of Onam as an event during which time all local chieftains assembled at Thrikkakkara to pay their veneration to the Kulasekhara Chakravarthi (Emperor). The festivities started from the star of Thiruvonam in the Malayalam month of Karkatakam and lasted for 28 days till Thiruvonam in the month of Chingam. The last 10 days saw the peak of celebrations. Later the festival has been confined to these 10 days beginning from the Atham star in Chingam. The records elucidate the celebrations in detail and the roles assigned to each king. It is not clear whether the festival had any religious significance at that time. The festival of Onam that first began to be celebrated at Thrikkakkara has now spread, spanning caste and creed, penetrating the remote corners of the world where Malayalees have reached, even as the cold inscriptions from a bygone era remain silent audiences for all the pomp and grandeur of the celebrations year after year. 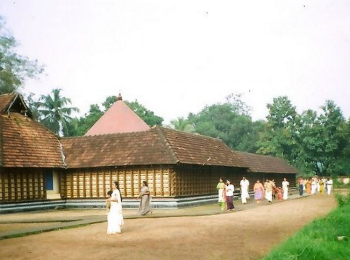 The temple consists of two separate Sreekovils for Lord Vamana and Lord Shiva. Five poojas - Ushapooja, Ethruthapooja, Pantheeradypooja, Uchapooja and Athazhapooja - and three Sheevelis- Ethrutha Sheeveli, Ucha Sheeveli and Athazha Sheeveli are conducted daily. Sree Bhagavathi, Sastha, Gopalakrishna, Nagam, Rakshass and Yakshi are the sub-deities of Vamana temple. The Shivalinga in this temple is believed to be worshiped by Mahabali himself and is located on the southern side of Vamana shrine. Devotees must visit the Shiva shrine before visiting Vamana shrine. The Shiva temple or Thekkumkara Thevar temple has shrines of Parvathi, Durga, Bhagavathi, Subramanian and Ganapathy. It is interesting to note in this context that though Thrikkakkara Appan or Vamana is worshipped during Onam celebrations, Mathevar or Mahadevar is also worshipped with equal dedication and the reason remains unexplained. The temple pond in the northern side is called Kapila Theertham and is considered divine. Only the temple priests are allowed to enter into this pond compound. The seat of King Mahabali is situated in front of the Mahadeva sreekovil. 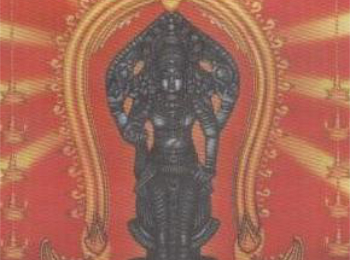 According to the Bhagavata Purana , Vishnu descended as the Vamana avatar to bring back the authority of Indra over the heavens from Mahabali, a benevolent Asura King.Hiranyakshipu's grandson and the son of Prahlada, King Mahabali was generous and won the praise of the world. Thus he regarded himself as the most powerful in the world. Vamana, in the form of a short Brahmin, went to the king  carrying a wooden umbrella and requested three paces of land. Mahabali agreed, against the warning of  Sukracharya, his guru. Revealing his identity ,he enlarged to gigantic proportions to stride over the three worlds.With the first step, he stepped from heaven to earth; with the second from earth to netherworld. King Mahabali,  offered his head for the third,unable to fulfill his promise. Vamana  placed his foot on his head and gave him immortality for his humility.A few texts reveal that Vamana did not step into the netherworld, rather gave its rule to Bali.Trivikrama is the giant form of Vamana. The legend is associated with the temple and also with Ulagalantha Perumal Temple, Tirukoyilur and Ulagalantha Perumal Temple, Kanchipuram.

The festival is held twice a year, in February- March and in March-April. The most important festival celebrated in this temple is Onam. It is held in a grand manner in the temple with a huge number of people participating in it without any religious barrier. The festival is celebrated for a period of ten days during the Malayalam month of Chingam. It is the centre of Onam celebrations over the world. A pyramidal statue symbolizing Lord Vamana is installed as a symbol of honour at all other sites of the celebration, and named Onathappan or Thrikkakara appan during the Onam celebration. This temple is the site where king Mahabali was sent to the underworld Patala by Lord Vamana with his foot.Thus marking the genesis of the Onam festival.  Thrikkakara means 'place of the holy foot'. In olden times the Onam festival was jointly organized under the leadership of the Maharaja of Travancore by the 61 Naduvazhis (or local rulers).

During the 10 day celebration,  several performances are showcased in cultural arts such as  Ottamthullal, Kathakali,Chakyar Koothu and Patakam.Dance and musical performances such as Panchavadyam and Thayambaka are also held. Each day  has its ceremonial significance.The temple authorities perform various ceremonial rites which involve the main deity along with the other deities present in the temple i.e., God Ayyapa, Devi, Lord Krishna and Rakshassa. The temple festival initiates on the first day i.e.,Atham with the Kodiyettu ceremony.It is a flag hoisting ceremony common  in temples of Kerala. Parallel to this, the festival is flagged off all over Kerala with a grand procession beginning at Thrippunithura near Kochi called Athachamayam. During ancient times, the Kochi Maharaja headed a grand military procession in full ceremonial robes from his palace to the Thrikkakara temple.The festival terminates on the 10th and final day.This begins with a symbolic welcome of the Asura king Mahabali.The lowering of the flag is done along with bathing of the idol,called Aarattu.The main attraction of the festival is the grand banquet, or Sadya, which is held on the last two days of the festival at the temple campus.The feast is growing significantly in magnitude each year, and is currently attended by about 10000 people. Vamana idol is decorated using mainly sandalwood paste, ornaments and clothing, which is called  Chaarthu . Every day, the idol is decorated in the form of one of the Ten Avatars of Vishnu, i.e., the Matsya (fish), Kurma (Tortoise), Varaha (boar), Narasimha (half man half lion), Vamana, Parashurama, Rama, Balarama, Krishna, Kalki and Trivikrama (another form of Vamana). A grand procession held on the penultimate (9th) day of the celebrations is the Pakalpooram . A similar procession  held on the final day is Seeveli.During the procession leading the main deity Vamana on a ceremonial elephant around the temple campus is done, along with a group of about eight ornamentally decorated elephants, accompanying Panchavadyam. The procession stops at all four gates of the temple at East, West, North and South, andgoes ahead to return the idol back to its inner sanctum. The procession is similar to the one held in festivities at the Guruvayur temple.

Once a farmer prayed to Thirkkakkarayappa, he would offer a bunch of golden bananas if his farmstead yielded fruits. Thirkkakkarayappa blessed the land and there was a heavy yield of Kadalipazham a type of plantain. The farmer kept up his promise by making golden bananas and at the behest of the priest he left the bunch of golden bananas outside the Sreekovil and left the place. When the priest returned after bath, he was shocked to see the bunch missing. As only a yogi was present nearby, he doubted the yogi and the matter was informed to the king. People started accusing the yogi for the theft. Next day, when the pujari performed abhishekam to the Lord, he observed that the abhisheka water was getting stagnated . This was because the drain hole was blocked with the golden bunch of bananas. The pujari realized his mistake and the king and others along with the pujari approached the yogi for forgiveness. But the humiliated yogi before committing suicide cursed them that they would lose their wealth and that his curse would end only after the town lost all its wealth. Accordingly, the town lost all its wealth. The yogi became a brahma rakshass due to his untimely death and the people to protect themselves from the wrath of the brahmarakshas constructed a small shrine and offered prayers to him. Even today, after nivedyam is offered to Thirkkakkarayappa the same is offered to the brahmarakshas too.


The nearest airport, Cochin International Airport (Nedumbassery), is around 27 kilometers from the city. Direct flights are available to major cities like New Delhi, Mumbai, Bangalore, Chennai, Hyderabad and Kolkata.

The nearest railway station is Ernakulam Junction Railway Station. It is linked with trains to major cities.