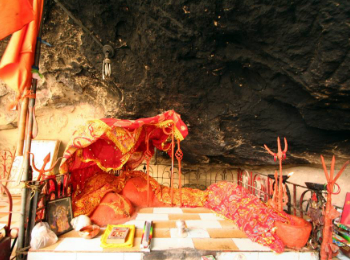 The Hinglaj Mataji is a revered place of pilgrimage for Hindus in general and for the devotees of AADH SHAKTI " DEVI MATA" sect in particular. It is located in a mountain cave on banks of the river "HINGHOL" and at the tail of " KHEERTHAR" maintains called " KANRAJ" in Tehsillyari of Balochistan the province of Pakistan. It is considered as one of the well-known and biggest "TEERATHS" of Indo Pak subcontinent. It is about 170 miles(250 KM) from Karachi city - one has to go by road on main" Karachi - Quetta" Highway up to zero Point for about 75 miles and then by road towards west through Lyari town and then to signal Fauji Camp Stop, crossing Aghore River then through GoongiRiver and last stop to " Asha Pura " Sarai Hinglaj Mata, also known as Hinglaj Devi, Hingula Devi and Nani Mandir, is a Hindu temple in Hinglaj, a town on the Makran coast in the Lasbela district of Baluchistan, Pakistan, and is the middle of the Hingol National Park. It is one of the Shakti Peethas of the goddess Sati, worshipped as Durga or Devi. 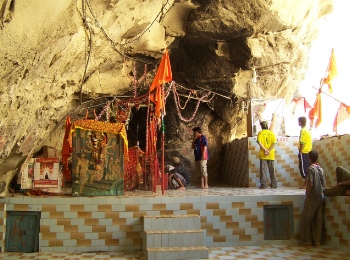 The cave temple of Hinglaj Mata is found in a narrow gorge in the remote, hilly area of Lyari Tehsil in Pakistan's Baluchistan province. It is located 250 kilometres (160 mi) to the north-west of Karachi, 12 miles (19 km) inland from the Arabian Sea and 80 miles (130 km) to the west of the mouth of the Indus. It is located at the end of a range of Kheerthar hills, in the Makran desert stretch, on the west bank of Hingol River. The area comes under the Hingol National Park.

The temple is situated in a small natural cave. There is a low mud altar. There is no man-made image of the goddess. A small shapeless stone is worshipped as Hinglaj Mata. The stone is smeared with Sindoor (vermilion), which perhaps gives the place its Sanskrit name Hingula, which is the root of the present-day name Hinglaj. 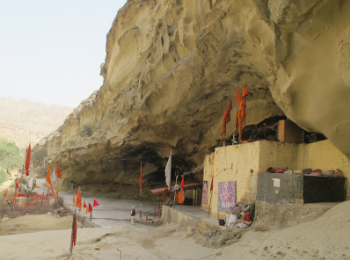 Maa Hinglaj is considered as the Goddess of Fate. Muslims address the deity of this temple as Bibi Nani or simply Nani and therefore the shaktipeeth is also known as Nani ka mandir and nani ka haj which means “Grandmother’s Shrine”. 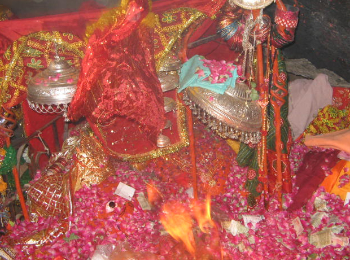 Hingol Shakti Peeth is believed to be supreme since Sati’s head had fallen here. It is also considered to be the first of all shaktipeeths mentioned in Durga Saptshati and Markand puran. This Shaktipeeth has various mythological stories are associated with it

In order to calm down Lord Shiva’s anger and to stop his Rudra Tandava, Lord Vishnu had to cut Sati’s dead body in pieces with his Sudarshan Chakra. These pieces fell at different places and each of these places as important places of Shakti worship and got addressed as Shaktipeeth. A part of Sati’s head with its Hingul (Sindhoor, Vermillion) fell on the Kunraj hills and it was named as Hingul Parvat and the Peeth was known as Shri Hinglaj Mata Asthan.

In Treta Yuga two cruel brothers -Hingol and Sundar, tormented people. To free the people from their bully, Lord Ganesh killed Sundar. After the death of Prince Sunder, Hingola became furious and swore to avenge. He undertook severe penance for many years to receive the boon that no living being in the three worlds would be able to kill him with any sort of weapon and his death will only happen at a place where Sunlight does not enter. Thereafter he conquered other kings, continued his reign of terror and cruelty. In order to kill Hingol, Maa Kali followed him to a dark cave which is currently the Hinglaj Mata shrine. Before he was killed, Hingol requested to name the place after him, which Maa Kali granted.

When Lord Parashurama was in the process of killing Kshatriyas, sage Dadhichi provided security to Ratnasena (king of Sindh). However, one day when the king went out he got killed by Parashurama but his sons remained in the ashram. When Parashurama visited ashram, they were masked as Brahmins. Sage Dadhichi taught them Hinglaj Maa’s Protective Mantra. When one of them, Jayasena returned to Sind to rule the kingdom, Hinglaj Mata not only protected him but also ordered Parshurama to end his killing spree. Hence Brahmakshatriya worship Hinglaj Mata as their Kula devata or Family Deity.

After killing of Ravana, who was a Brahmin and a great devotee of Lord Shiva and Goddess Durga, Lord Rama was affected by ‘Brahmhatya’ dosha. In order to free himself of his sin of ‘Brahmhatya’ Rama Meditated at Hinglaj.

The nine days of Navratas are said to be the most holy days for visiting and worshiping Maa Hinglaj. An annual four day pilgrimage is organised by Shri Hinglaj Seva Mandli during the festival of Navaratri (April).

During this pilgrimage large number of devotees’ come together to worship Hinglaj Mata, and the mountain desert turns into an oasis of hospitality, fervor and devotion.

The festival takes place for four days. On the third day a major ritual takes place when the priests recite mantras and the offerings brought by the pilgrims are presented to the deity. Offerings primarily consist of three coconuts.

Some devotees stay in Hinglaj for all four days while others make a short day trip.

Hinglaj Mata Temple is one of the famous and biggest “TEERATHS” of Indo Pak subcontinent.

The fact is that Muslims equally admire this place and come to pray, they call it “Nani-Ka-Haj” which means “Pilgrimage to Grandmother’s Shrine”.

There is a large lake near the mud volcano, which is said to be of great depth. Following one of the myths, there is a practice of throwing a coconut forcefully into the water, and as the bubbles arise in a large or small quantity, the individual accordingly will be happy or miserable.

After creation of Pakistan, the govt. had declared it a prohibited area for residents of India but devotees residing in Pakistan and other foreign countries still take holy pilgrimage to the Peeth starting from Shri Swaminarayan Mandir complex in Karachi during Navratras in the month of April.

Shri Hinlaj seva Mandli every year makes arrangement of Yatra in the month of April in the form of JATHA JATHA , which is a large group of around 5000 people consisting of men, women and children of different languages and cultures from all the states of Pakistan. These devotees are dressed in red caps and carry flags and banners of Hinglaj and past memories are renewed.

Like Amarnath Yatra in Jammu and Kashmir, the Hinglaj Yatra is also considered difficult-one but those who perform it, are blessed by the Mata.

Hinglaj shakti peeth is situated in a cave on ‘Kanraj’ Mountain along the bank of river ‘Hinghol’ in Lyari Tehsil of Baluchistan. It is about 250 km from Karachi in Pakistan.

First of all you need to get a visa allowing you for a specific stay in Karachi and Balochistan.

Hinglaj Shakti peeth is a day trip from Karachi. One can take public transport or private cars to reach Aghor River. The best way is through the newly constructed Coastal Highway which runs parallel to Arabian Sea. This takes about 2.5 – 3 hrs to reach Aghore. Buses are also available at Inter-City Bus Terminal, Baldia Town, Karachi.

Some devotees go walking and few cycle their way to the shrine, as it is believed that more the seriousness, the more is the grace of the deity.

From Aghore Bridge, the temple is about 15 km away. One can go by walking or hitch-hiking. One can find some means of transport like motor bike from a nearby village, Aghor.