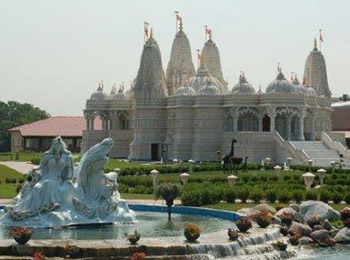 It is built of hand-carved Italian marble and Turkish limestone. The mandir is the largest of its kind in Illinois and was constructed according to guidelines outlined in ancient Hindu texts of temple architecture. The complex spreads over 27 acres and, in addition to the mandir, includes a haveli and a small bookstore. The haveli is a cultural center in which weekly congregations are held. The mandir is open daily for worship and to visitors. The temple, classified within traditional Hindu architecture as a ‘Shikharbadha mandir,’ has been built according to principles laid out in the Shilpa Shastras. The Shilpa Shastras are Hindu texts prescribing standards of sacred architecture. Within the mandir are different shrines, in which murtis (sacred images of Hindu deities) have been installed. The central shrine holds the murti of Swaminarayan, with Gunatitanand Swami to his left, together worshipped as Akshar-Purushottam Maharaj. Other shrines hold the murtis of Ghanshyam Maharaj, Harikrishna Maharaj, Shri Radha Krishna, Shri Shiva Parvati, Shri Sita Ram, Hanumanji, Ganapatiji and the lineage of BAPS gurus who are Swaminarayan’s spiritual successors.

In 2005, the BAPS mandir complex was awarded the Chicago Building Congress Merit Award for its unique style of Indian stone architecture and engineering, as well as its positive cultural and spiritual impact on Bartlett. It was recognized in Stone World magazine as a true symbol of ancient heritage and craftsmanship of traditional Indian temples in the same year. The American Institute of Architects has recognized the mandir as one of the 150 Great Places in Illinois.

Accordingly, the Swaminarayan sadhus (Hindu monks) offer devotional worship to the deities throughout the day. The sadhus awaken the deities before dawn by singing morning hymns, called prabhatiya. Mangala aarti, which is the first of five aartis, is also performed at this time. Aarti is a ritual where devotees sing the glory of God while a lighted wick is circulated before the murtis. After mangala aarti, the deities are bathed and offered food and garments that vary with the season. After the murtis have been adorned with garments, shangaar aarti is performed. At midday, rajabhoga aarti is performed and food is offered to the murtis. Food that has been offered to the deities is considered sanctified, and is distributed to devotees as holy prasadam.

The O'Hara International airport is 20 miles from downtown Chicago is the world's busiest airport. There are many national airlines that are headquartered here. Amtrak has a major hub in Chicago and this is always a viable option.