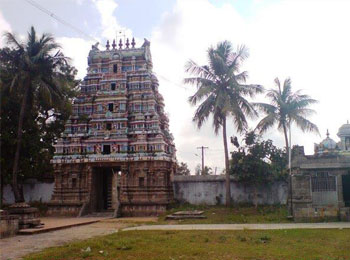 Tirunavalur is small village located from 15 km North-East of Ulundurpet town. It has famous ancient Shiva temple called as Bhakthajaneshwarar Temple. It is the 8th of the 22 Shiva temples in Nadu naadu region of Tamil Nadu praised in the Thevaram hymns.

The presiding deity of this temple is Lord Shiva - Bhakthajaneshwarar also known as Jambunatheswarar, Tirunavaleeswarar and Tiruthandeeswarar. Goddess is also known as Navalambikai, Sundarambikai and Rakshambikai. Vinayaka in the temple is known as Sundaravinayakar, Muruga as Shanmuganathan. There is separate sannithi for Varadharaja Perumal in the temple. The holy springs are Gomukhi theertham and Garuda River.

When the milk ocean was churned, the poison came out which Lord Shiva consumed to protect the lives of all creatures. The drops that fell on earth grew into Jumbo fruit trees and came to be known as Jumbo forest. The Lord descended on this spot and the antiquity of the place is said to be earlier the Yugas.

There was only a sanctum sanctorum and no other buildings for the temple. Later the temple was extended with more structures by the Chera, Chola, Pandiya and Pallava kings. The Sanskrit Jambunatheshwarar was later mentioned as Tirunavaleesan in Chaste Tamil by Sundarar. He also named the place as Tirunamanallur.

People having retrograde Venus in their astrological birth chart and people who are affected by this come here for worship of lingam installed by Shukran for better married life. Special pooja is conducted on Fridays for the lingam.

The nearest airport is Pondicherry Airport.

Vizhupuram has a well-known railway station.

Vizhupuram is well connected by road to major cities and to the rest of the state.