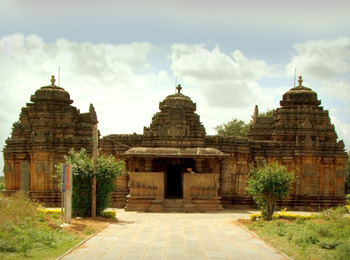 The Someshwara Temple stands abandoned in the once flourishing village of Haralahalli; the human habitants have moved to the new settlement of Hosa Haralahalli around 2kms from the aforementioned temple. This temple is a trikuta (a temple with three shrines) with three shikharas that bear sign of refurbishment and repair. The temple confines are well-maintained by a caretaker who is well-versed with the history of the region and the imagery of the many sculptures in the temple.

This Trikutachala temple, facing east, assignable to 11th to 12th century A.D. has three shrines with a separate ardhamandapa, a common hall (navaranga) and an open mukhamandapa. The exterior portion of the kakshasanas in the mukhamandapa is decorated with a pilasters capped by miniature sikharas. The mukhamandapa has a sloping roof with eaves. The upper ceiling above the eave is decorated with kudus and other motifs. The common hall is supported by four pillars with a seated Nandi in the centre. The three shrines house Linga each on a pedestal. The lintel portion of the three shrines contains Gajalakshmi is seen as lalata bimba. The exterior wall of the temple is relieved with miniature pilaster capped by miniature sikharas. Dravidian type sikhara can be seen over the three shrines.


The nearest airport is Hubli Airport.