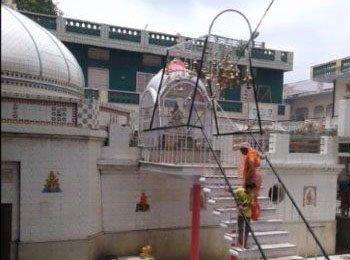 The Shona Shiv temple located in the district of Gurugram, Haryana, is a renowned shrine dedicated to Lord Mahadev. Located south west of Delhi, Gurgaon or Gurugram serves as a major financial and technological hub of north India. The Shiv Kund Sohna is situated on the out skirts of the city Gurugram. The place is widely known for its natural hot water spring. The water from this hot water spring is believed to have cured skin diseases. 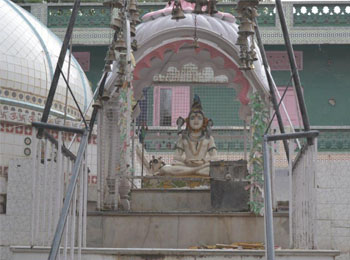 The locality is known as Shiv Kund due of the presence of this Shiva temple. The hot water from the earth gets collected in a Kund (tank) which is around 55 feet deep under the ground and is covered by a tomb. The tomb was built by a banzara family in Vikrami Samvat 1566 (Hindu calendar). The Main Tomb and Tank is called Sakham BABA. The Shiva Temple is situated near the main tank and was built by the Maharaja of Gwalior, around that period.

The place finds mention in the book “Aien-E-Akbari” that was written during the time of the Mughal emperor Akbar. The book describes the religious significance of this place.

It has been a tradition for the people, to take a dip in the holy waters of Shiv Kund and then proceed towards the temple for worshipping the deity. Devotees visit the temple in large numbers during the months of Fagun and Savan, for Ganga Sanan and Somvati Amavasya.

The Shiva Temple at Sohna, is an excellent piece of architecture with a unique design. The temple is built in such as way that the rays of the sun fall directly on the Shiv Linga during the mornings, afternoons and in the evenings. The Shiva Linga resembles a different form of a man during these hours of the day. The Shiva Linga seems like a sitting child in the morning whereas it resembles a young man in the afternoon. During the evening, the Linga appears like an old man sitting in the "Dhyan Mudra" or in a meditating position. It is believe that Lord Mahadev blesses his worshippers with all that they wish to seek from the Lord.

According to Hindu Mythology, Shiv Kund is called the "Nai" of all the Hindu Tirthas or the holy places. It is believed that the theertha yatras (pilgrimage tours) undertaken by the pilgrims stand incomplete until visiting this holy shrine and worshipping the almighty.

The nearest airport around the place is Delhi International airport. Being the national capital, Delhi is well connected to all major cities and town in India. Tourists can hire a taxi or board a local bus to reach the temple. There are regular flights from Delhi to Pune, Mumbai, Bangalore, Agra, Jaipur and various other domestic and international destinations.

Gurgaon railway station is well linked to many major cities and towns in India. A number of regular train services ply from cities like Delhi, Agra, etc on a daily basis.

Gurgaon or Gurugram, being a well-developed city, has many national and state highways running through it. It has a well developed road lines that connect the place with the rest of the country.