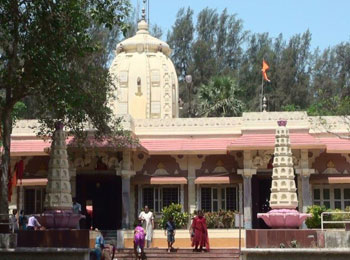 The deity of Goddess Shitala Devi is worshipped at the Shitala Devi Temple located in Kelve at Maharashtra. The town ‘Kelve’ came from the Sanskrit word ‘Kardalivaha’ and it has an important status in the Indian mythology as well as history. This town is considered holy as Romea;s foot-prints lay here. This temple is one of the ancient ones in the town and went through a full renovation as well as restoration during the reign of seventh female ruler named Devi Ahilyabai Holkar almost three centuries ago. The temple building has deteriorated over time but a repairs and restoration committee was set up in 1986 to look after the temple. During the year, thousands of devotees and pilgrims visit this temple at various festival celebrations.

As per a legend, Goddess Shitala once made an appearance in a farmer’s dream. The people of the town then began searching for the idol of the Goddess and soon found it. They dug out the deity and brought it into the town with great celebration. The deity was then enshrined at the place where the temple stands presently. There is an irrigated land known as Bagalwadi nearby the temple which is known to be inherited by Goddess Shitala.

The deity of Goddess Shitala was carved out of a stone and is known to be self-existent. The Goddess is known to be calm and peaceful, due to which she is named ‘Sheetalai’. Thousands of devotees from Gujarat, Maharashtra and Rajasthan visit this temple as it is believed that her blessings can cure various types of illnesses, ailments and difficulties. The devotees usually offer coconut, rice and sleeked cloth to the Goddess in order to thank the Goddess for fulfilling their wishes and helping them. Some devotees even offer jewelry and money as a token of their appreciation.

The devotees can arrive at the nearest airport of Chatrapati Shivaji International Airport located in Mumbai. Road transport is available from the airport to reach the temple.

Frequent road transport is available to reach the temple. The devotees have to travel from Palghar to Kelva beach via the Mahim-Palghar road while heading towards Chedoba Temple and then taking up Shitala Devi Road to reach Kelva beach.