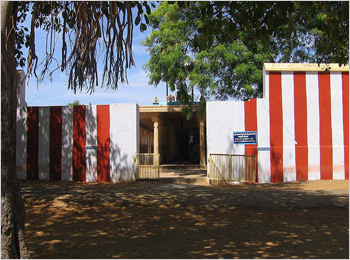 The Tirunelveli Sthalapurana prescribes a tradition for the origin of the name Tirunelveli. The puranic version goes that one Vedasarma, a staunch devotee of Shiva, on his pilgrimage from the North to the South was invited by Lord Shiva in his dream to his abode on the banks of the sacred river Tamiraparani. The delighted devotee came to 'Sindupoondhurai on the banks of the river and stayed there with his family. Once there was a famine which forced Vedasarma to collect paddy by way of begging and continuing his daily prayers. One day he spread out the paddy to dry under the Sun before the Lord, and went for his ablutions in Tamiraparani. He prayed to the Lord for rain which he thought could be a remedy for the famine. His prayer was answered and when he was bathing, a thunder storm broke-out and it rained heavily. Vedasarma rushed to the place where he had spread the paddy. He witnessed a miracle. Despite rain around the area, the paddy that he had spread did not get even a single drop of rain and did not get soaked. Since then according to the purana the Town is called as “Tiru-nel-veli” (Sacred hedged paddy).

Origin Of the District

On acquisition from the Nawab of Arcot in1801, the British named it as Tinnevelly district though their headquarters was first located in Palayamkottai the adjacent town, where they had their military headquarters during their operations against the Palayakars. Two reasons may be attributed for naming it after Tirunelveli. One is because, it was and is the chief town of the district and the other is that it was already called as Tirunelveli Seemai under the Nayaks and Nawabs. Both Tirunelveli and Palayamkottai grew as the twin towns of the district. 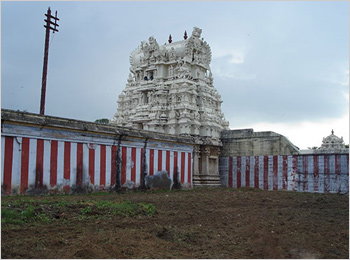 There are nine sacred shrines in this Pandya region equal to those in the Chola region attributed to nine planets. As Lord Vishnu Himself is acting as the nine planets in these places, there are no separate shrine for the navagrahas the nine planets. Those facing any adverse aspect of a planet are advised to visit the Nava – nine Tirupathis for relief.

It would be difficult to catch buses for each such place causing more days to complete this pilgrimage. A cab can be hired to visit the places for completing the tour in a day. Those in Chennai can avail the services of Tamilnadu Tourism Development Corporation which is arranging the trip twice a month on the first and third Friday of the month. They can return by Wednesday morning. The Nava Tirupathis are related with the nine planets as Perumal Himself is the planet of the particular place.

Accordingly, they are as follows:

The Aravindalochanar temple is built in Dravidian style of architecture. The temple occupies an area of 1 acre and is surrounded by a granite wall. The temple is situated in a thick forest. The rajagopuram, the temple's gateway tower, is a flat structure, unlike other South Indian temples, which have a conical elevated structure. A granite wall surrounds the temple, enclosing all its shrines and halls. The sanctum houses the image of Aravindalocha facing east. The image is made of Saligrama stone.

Lord graces in the temple under the Gupta Vimana (tower) in the sanctum Sanctorum.This sthala Moolavar is Sri Aravindha Lochanar. Also named as “Senthamarai Kannan”. He is giving his seva in Veetrirundha thirukkolam facing east direction. The Thaayar of this temple is Sri Karunthadanganni Naachiyaar. This sthala perumal is prathyaksham for Indiran, Vaayu bhagavan (Air), Varuna bhagavan (Rain).

Two Temples at Thulai Villi Mangalam, referred to as Erettai Tirupathi, about 100 yards of each other on the Northern banks of Tamaraibarani make up one Divya Desam

First temple is found along the banks of River Tamirabarani. The Moolavar of first sthalam is named Srinivasan. Also named as Devapiran. He is giving his seva in Nindra thirukkolam facing his thirumugam in East direction.Two pirattiyaars are found on either side of him.Second sthalam is found along the Tamirabarani river.This sthala Moolavar is Sri Aravindha Lochanar. Also named as “Senthamarai Kannan”. He is giving his seva in Veetrirundha thirukkolam facing east direction.Thaayar of this temple is Sri Karunthadanganni Naachiyaar.This sthala perumal is prathyaksham for Indiran, Vaayu bhagavan, Varuna bhagavan.

As per Legends, a rishi named Athreya Suprabha rishi, maintained a yaga Sali. When he was cleaning the yaga salai, he found a bright equilibrium and a bow. On touching those two, it changed into beautiful men and a woman. They both explained him that they were changed into the tarasu and the bow because of the poorvajenma sabham, His touch gave them both sabhavimocchan and got paramapadha mukthi. Since, this sthalam is named as “Thulam Vil Mangalam” and as the years passed the name changed to “Tholai villi Mangalam”.

A persons expression of Love, his kind nature and the bhakti is expressed through his eyes. So, the bhaktas who live in a good way and lead their lives in the Dharma way to achieve Sriman Narayanan’s Thiruvadi, Emperumaan, gives his seva as “Senthamarai Kannan” and as Aravindha Lochanar along with Karuthandangi Naachiyaar. Dharma Tarasu has two plates, which stands in equal to one another, likewise the Emperumaan and Thaayar are found to be equal and giving the Veetrirundha seva. Since, both of this sthalam are found along the Tamirabarani river, how rivers flow in different direction, but when they mix together they are treated as the same, like wise even though there are two sthalams, these two are considered to be one divyadesam.

All these Nava tirupathis have a common and a distinct news, that has to be explained. In thirukkurugoor Indiran, who did not give the proper respect for his parents, in Thirukkoloor where Guberan has given the Sabham, in Thirupperai, varunan treated his Guru, and in Thiru Vaikundam, a thief giving his share of the theft things to Emperumaan, in Thiru Varaguna Mangai, where Saavithri fought for her husband’s life, in Thirupulingudi, Yagnasharma, who got the sabha of Vashista Muni’s sons and in Thiru tholai villi mangalam, a men who was burried into the land as “the Bow” and a women as “Tarasu” by Guberan, got their Sabha Vimocchan. All in these nine tirupathis, Sriman Narayanan, gave them the Sabha vimocchan and to attain the paramapadha world.

Vaikunda Ekadasi in December-January (the 11th day from the New Moon day) in Tamil month Margazhi is grandly celebrated in the temple.

The temple follows the traditions of the Thenkalai sect of Vaishnavite tradition and follows Pancharathra aagama. The temple priests perform the pooja (rituals) during festivals and on a daily basis. There are weekly, monthly and fortnightly rituals and festivals performed in the temple. Four daily rituals are held at the temple.

It is advised that devotees go to the temple after ascertaining the time of the presence of the priest of the temple. This is attributed to Shadow Planets (Chaya Grahas) Rahu and Ketu.

Joining two Azhwar tirupathi sthalams, and it is considered to be a single divyadesam, this is called as “Twin Tirupathi”. Both these two sthalams are found inside a small village where there is only small amount of human live.People pray for successful marriage alliances and progress in education.

One also has the option of flying, for the nearest airport is in Madurai, which is 156 km away from the temple.

One can also take the train, as the nearest railway station is Srivaikundam.

The Rettai Tirupathi Temples and the Kethu Temple in Thirukkulandha can be reached by bus. Buses ply between Tiruchendur-Tirunelveli routes. Bus services to this temple are available from Madurai, Tirunelveli, Tiruchendur and Thoothukudi through Srivaikuntam and to the temple. The temple is 8 km from Srivaikundam.