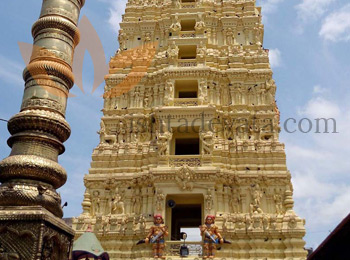 
Ksheerarama is one of the five Pancharama Kshetras. It is situated in Palakollu in Andhra Pradesh. Lord Shiva is known locally as Ksheera Ramalingeswara Swamy. The Sivalinga was brought here and placed by Lord Vishnu. It is believed that staying one day in Kshirarama is equivalent to staying one year in Varanasi. 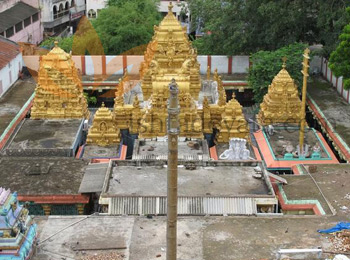 The Shivling is a unique milky white in colour and the tallest. There are 72 pillars made of black stone in the temple mandapa. Also inside the garbhalaya, Gokarneshwara and Vigneshwara alayas are situated at the left and Kshiralingam located in the center. To the right are Subramanya Swamy and Janardhana Swamy alayas; Nandi is at the centre. The Gostani River flows through Palakollu and there is a sangam (confluence) near Narsapur with the Godavari River. From here the river empties into the sea at Antarvedi. The Moola Virat (lingam), can be seen from the windows of the Garbha Gudiall on all four sides. also The temple complex has many shrines, including: the Sun God (Kashi Vishweshwara), Goddess parvathi, Goddess Lakshmi, Nagareshwara Lingam, Dundi Vigneshwara, Veera Bhadra, Sapta Matruka, Kanaka Durga, Brahma, Saraswathi, Kumara Swamy, Kartikeya, Mahishasura Mardhini, Kala Bhairava, Naga sarpa, Nataraja, Dattatreya, Nageshwara, Shaneeshwara, Radha Krishna, Shankara.

The Prakara was designed by Sri Velupathi during the 10th century. The construction technique resembles those built during the Chalukya period. Gopuram was constructed under the direction of Sri Alladu Reddy during the 14th century. During the 17th century, Kalyana mantapam (choultry) and Ashtha Bhuja Lakshmi Narayanaswamy alaya were constructed. The temple tower is one of the tallest among the temple towers in Andhra Pradesh. 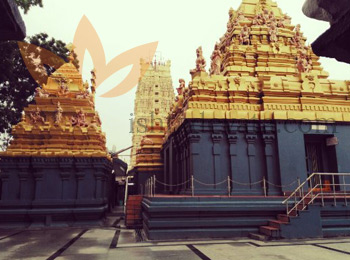 The presiding deity of Ksheerarama temple is Lord Shiva in the form of Shivalingam, who is also called by the name Ksheera Ramalingeswara Swamy. The sacred Shivalingam at Ksheerarama temple is believed to be installed by Lord Vishnu. It is believed that the Lingam is white in colour is the tallest. There are seventy two pillars made from black stone. Within the Garbhalaya,  Shri Gokarneshwara and Shri Vigneshwara (Ganesha) shrine is located at the left with Shri Kshiralingam settled at the middle. Shri Subramanya Swamy and Shri Janardhana Swamy shrine with Nandi at the centre are located. Gostani stream flows through the city Palakollu and there’s a sangam place near Narsapur with stream Godavari. The Shiva symbol can be seen all the four sides through windows within the Garbha Gruharam. The other deities of the temple are Shri Surya (Sun God), Shri Kashi Vishweshwara, Goddess Shri Parvathi, Goddess Shri Lakshmi, Shri Nagareshwara Lingam, Shri Dundi Vigneshwara, Shri Veera Bhadra, Shri Sapta Matruka, Shri Kanaka Durga, Shri Brahma, Shri Saraswathi, Shri Kumara Swamy, Shri Kartikeya, Shri Mahishasura Mardhini, Naga sarpa, Shri Nataraja, Shri Dattatreya and Shri Kala Bhairava. This Shiva symbol   is established by the Shri Rama (Lord Vishnu). The art of Ksheera Ramalingeswara swamy Temple Palakollu construction resembles those created throughout Chalukya period. Gopuram is built by Shri Alladu Reddy during 14th Century.


As per the legend, this Shivalinga was owned by the Rakshasa King Tarakasura. No one could win over him due to the power of this Shivalinga. In the war between deities and Taraka, Kumara Swamy and Taraka were face to face. Kumara Swamy used his Sakthi aayudha to kill Taraka. By the power of Sakti aayudha the body of Taraka was torn into pieces. But to the astonishment of Lord Kumara Swamy all the pieces reunited to give rise to Taraka. Kumara Swamy repeatedly broke the body into pieces and it was re-unified again. Lord Kumara Swamy was confused and was in an embarrassed state then Lord Shriman Narayana appeared before him and said “Kumara! Don’t get depressed, without breaking the Shiva lingham worn by the asura you can’t kill him” you should first break the Shiva lingam into pieces, then only you can kill Taraka Lord Vishnu also said that after breaking, the shiva lingham also will try to unite. To prevent the Linga from uniting all the pieces should be fixed in the place where they fall by worshipping them and building temples on them. By taking the word of Lord Vishnu, Lord Kumara Swamy used his Aagneasthra (weapon of fire) to break the Shiva lingham worn by Taraka. The Shiva lingham broke into five pieces and was trying to unite by making Omkara nada (Chanting Om). Then Surya deva by the order of Lord Vishnu fixed those five pieces of Shiva linga and worshipped them by building temples over them. By the formation of temple the pieces stopped their movement and were famous of panchrama kshetras. All the five Shivalinga in these five places have got scaly marking as them which are believed to be formed by the power of Agneyasthra used by Lord Kumara Swamy. According to legend, these five pieces were installed as Shivalingas at five different temples by Indra, Surya, Chandra, Vishnu and Kumara Swamy at the respective places.

Maharshi Agastya told Shri Ram that he developed black complexion as he committed a sin in killing Ravana who was a brahmin. To get rid of this Shri Ram was advised to take bath in holy rivers and install Shiva Lingas.

After installing several Shiva Lingas, Shri Rama accompanied by Sita and Lakshmana came to Gosthani river to install a Shiva Linga, Sita sent Hanuman to procure it. Hanuman could not return within time and so Sita made a Shiva Linga out of the sand consisting of snails and performed pooja. On his return Hanuman was very much disappointed. Observing the agony, Shri Ram asked Hanuman to place the Linga on the banks of the river and assured Hanuman that devotees who visit the place first worship the Shiva Linga brought over by him and next Shiva Linga consecrated by Sita.

Hanuman felt very happy. This temple is one of the Pancharama temples. Devotees who spend one day here get the grace of Lord equivalent to the grace obtained with a year stay at Varanasi. The height of the temple is 120 ft. and is built by the  Chalukya Bheema.

Mahasivaratri is an important festival when thousands of people offer prayers to seek the blessings of the Ksheera Ramalingeswara Swamy to attain Mukti.

Three express trains service the town. Palakollu is located at the National Highway 214 which is in the heart of Andhra Pradesh. APSRTC operates buses from Palakollu to major cities like Hyderabad, Vizag, Vijayawada, Tirupati and the like.