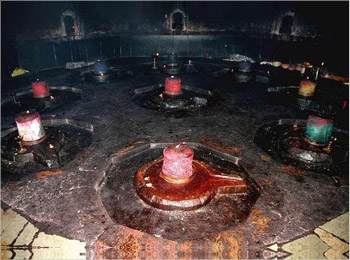 
The Navagraha Temple is situated in Southeastern Guwahati. 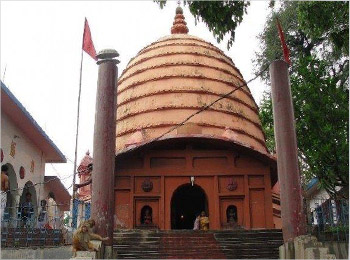 The religious temple is located in the south eastern part of Guwahati in Assam, on a hill by name Chitrachal. As the name indicates, this temple is dedicated to the nine planets in the solar system. Navagraha Temple at Guwahati Assam is a center of astrological and astronomical research.


There are nine Shivalingams representing the nine Celestial bodies, each covered with a colored garment symbolic of each of the celestial bodies. The nine planetary gods, namely area - Surya (Sun), Chandra (Moon), Mangala (Mars), Budha (Mercury), Brihaspati (Jupiter), Sukra (Venus), Sani (Saturn), Rahu and Ketu. There is Surya Mandir near Guwahati on the Surya Pahar hill. The Navagrahas or the nine planets thus are represented in the Sashtras. Firstly, the Surya's great Chariot which has one wheel and is drawn by seven horses, While carrying lotus in each of his hands, he wears an armour and has a shield over his breast with the beautiful Straight hair, and is surrounded by a halo of light. Next is the great Chandra who is been represented in white colour, clothed in white garment who is surrounded by a halo and adorned with ornaments and garland of all sorts of flowers. Thirdly comes mangala who is represented in fire – like red colour, clothed in red garments, seated upon Simhasana, with three arms bearing 'Gada', ;Sula', ' Sakti' weapons and as one in an 'Abhaya' or 'Varada' pose. Then, Buddha is being represented in Yellow Colour, clothed in yellow garment, with three arms bearing 'khetaka' and' Gada' and in Varada pose. In the fifth place is Brihaspati who is represented in yellow colour, clothed in golden yellow garments, with three arms bearing 'Kamandalu' ' ' Aksamala', and 'Danda' and in Varada pose Sometimes this planet is represented with two arms having a 'Pustaka' and an ' Aksamala'. 'pustaka'. Then sixth comes shukra represented by white colour, clothed in white garment, having foue arms and one who bears weapons as Brihaspati. Shukra is sometimes represented with two hands bearing Nidhi' ( Treasure) and ' Pustaka'. The last, ninth planet is the ketu being represented in dark colour having two arms in Abhaya pose holding a 'Gada' and sometimes on a chariot drawn by ten horses”.


The present Temple of Navageahas in Guwahati was built during the time of King Rajesvar Singh in 1752 AD. The upper part (Sikhara) of the temple was destroyed by the great earthqueke which occurred in the old times and was rebuilt with corrugated iron – sheet. The 'Garbhagriha' , built of brick however, exist.

Guwahati has its own airport. One can pick a bus or taxi to the temple. Guwahati is well linked to all the parts of India by rail lines. One can reach the Navagraha Temple by road from any part of Assam.