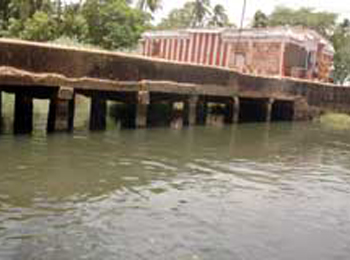 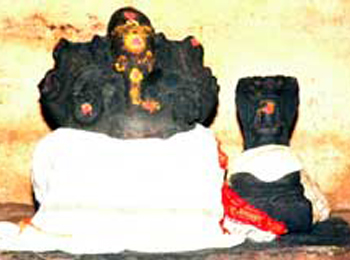 His Holiness Sri Kanchi Mahaswamigal, in His “Voice of Divinity” (Deivathin Kural) has mentioned about this canal quoting from a book ‘Kavyamala’ published by Nirnayasagar Printers in Mumbai based on some old and other copper epigraphy collected by them. There is also a mention about Milagu Pillayar worship in the Government Gazette published in the year 1916 in page 367. It would be very useful if the Government takes up this temple that would be useful to promote national unity. 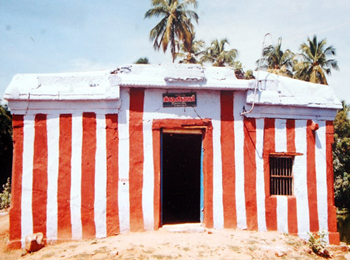 According to a story, there was a king ruling Kerala who was suffering from an incurable disease. One night he heard a voice in his dream instructing him to make a doll of his height, fill it with emerald pearls, place his disease also into it and donate the idol to a Brahmin. Following the divine voice, the king created the doll according to the specifications but no Brahmin accepted it. A young Brahmin from Karnataka heard the news, came to the king and accepted his donation. As soon as the doll changed hands, it came alive. The doll demanded that a part of the benefits of the Gayatri Mahamantra that the youth was chanting all his life be given to it so that the disease in the doll would not affect him. The Brahmin obliged but later regretted the fact that he had wronged due to his desire for the wealth. He decided to spend the wealth for a charitable cause. But when he was unable to decide a particular project, he went to meet Sage Agastya for his advice. Before departing to meet Sage Agastya, he left the pearl filled doll with a Brahmin in Abasamudram whom he trusted and told him that he would take it back on his return. Sage Agastya, in order to test the determination of the youth, created many obstacles on the way, but the youth endured all the hardship and reached the sage.

The sage granted him his wish and asked him what he wanted. The youth expressed his desire. The sage told the boy that of all the good deeds, creating water facility was the best. He told the youth to follow a cow that he would come across on his return. The sage asked him to follow it holding its tail and dig a canal. He instructed the youth to build dams wherever it left its dung and make storing places where it urinated. Also create lakes where it rested. The cow would disappear at a place where he could complete his project. The youth did everything as instructed by sage Agasthya. The youth then went to the Brahmin to get the doll back. On opening the doll he found only pulse grains instead of the pearls. He went to the king and explained his predicament and how he was cheated. The king summoned the Brahmin and demanded that he swear in front of God Shiva in a temple. The Brahmin was burnt there when he swore falsely. The youth then got back the priceless pearls. Cheranmahadevi is supposed to be the place where the youth found the cow. The cow disappeared at a place called Prancheri where he created a big lake. Till date nobody knows the name of the youth hailing from Karnataka. Hence, the canal is named in Kannada. He was about what would happen if monsoon failed and it happened for three years. The youth installed a Vinayaka, ground pepper on his body, performed abhishek and in such a way that it fell in the canal. Dark clouds gathered and heavy rains followed. The farmers of Cheranmahadevi follow this form of worship even today.

Vinayaka Chaturthi is grandly celebrated in the temple.

When monsoon fails, the Farmers’ Association of Cheranmahadevi pray to this Vinayaka by grinding pepper on him, perform abishek in a way that the abhishek water falls in the canal so that monsoon would set in.

Cheranmahadevi is 16 km from Tirunelveli on the road leading to Papanasam. The temple is on the banks of the Kannadian canal near the bus stand. The temple is under renovation now.


Near By Railway Station