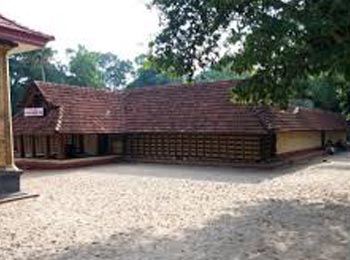 Sri. Maha Vishnu temple in KottamKulangara is one of the oldest temple in Alappuzha district (Or even in south Kerala). The deity was worshiped in Ancient times and was under the ruins. Later on 12th century Sri Vilwa Mangalam Swamiyar found the four handed Icon from the big Pond. The Devi Temple (Bhadrakali) is relatively new here. The temple was built around 1799 AD, after the outbreak of a contagious disease. The icon was kept at Avaloor Ma-dam and later brought to the current place, on the left of Sri Maha Vishnu Temple.

This place got its name from a pond called kottamkulam. There is a temple complex in Kottamkulangara having two main dieties, namely Sri Maha Vishnu and Sri Bhadrakali. This complex has some specialty like the two deities having separate flag masts, having two separate festive seasons, that too inside the same compound wall.