Alampur is a temple-town situated in Mahbubnagar in Telangana. It is the meeting point of the sacred rivers Tungabhadra and Krishna and is called Dakshina Kashi. The principal deities at Alampur are Brahmeshwara and Jogulamba. It is surrounded by the Nallamala hills. Alampur is situated on the left bank of the Tungabhadra river. 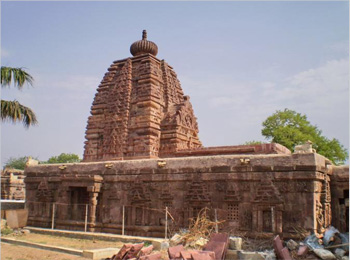 Jogulamba is among the eighteen Shakti peethas. Oordhva danta pankti (Upper jaw with tooth) of devi fell here. She is the Shakti of Bala brahmeswara swamy.This temple is 5th Shakti Peetha representing Upper teeth part of Goddess Shakti. The current temple of Jogulamba was built in 2005 as the original temple was destroyed. The idols of Goddess were places in Bala Brahmeswara temple for 6 centuries. Chalukyas, who ruled this area from Badami for over two centuries, constructed nine magnificent temples called Navabrahma temples along with Sangameswara Temple between 640 AD and 753 AD. The temple construction was initiated by Chalukya King Pulakesi II during his visit to Alampur while returning to Badami after his victory over Pallavas of Kanchi. Later, the rulers of Rashtrakuta and Kalyani Chalukya Empires have contributed to the enhancement of these temples. The Navabrahma temples, named as Bala Brahma, Taraka Brahma, Swarga Brahma, Padma Brahma, Garuda Brahma, Kumara Brahma, Arka Brahma, Vira Brahma and the Vishwa Brahma are built in close proximity on the banks of River Tungabhadra. Among these, Bala Brahma temple is the biggest and only active temple. The Jogulamba Temple is also located near these temples and all the places can be visited together. Sangameswara Temple is about 2 Kms from Navabrahma temples site. The original Jogulamba Temple and Taraka Brahma Temple were completely demolished by Bahamani Sultan army towards the end of 14th century. Vijayanaraga king Harihara Raya sent his army to stop the plunder of Bahamani Sultan's army and fortified the temple complex to stop further attacks on the temple. The temples at Alampur could not be preserved pretty well, primarily due to the encroachments, lack of space and religious activity of Jogulamba and Balabrahma temples. 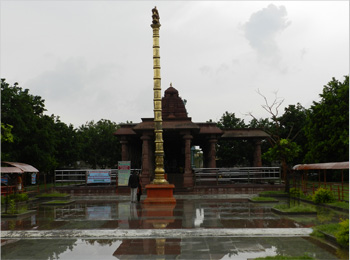 The idol is seen to be in a sitting position. It has huge hair with lizard, scorpion, owl and a human skull in it. Idols of Saptamatrikas, Vighneswara and Veenapani veerabhadra are also present in the temple. Original Chandi Mundi idols were left in Bala brahmeswara swamy temple and new idols are made and placed in Jogulamba temple. 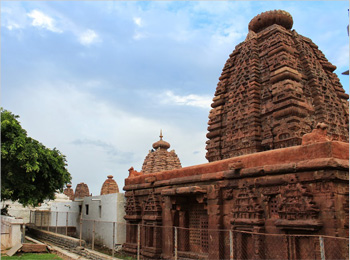 Legend says that once upon a time Alampur was the ashram of Maharshi Jamadagni and his wife Renuka. They were spending their lives by worshiping Balabrahmeswara and Jogulamba. Renuka was great at Pathi bhakti and Daiva bhakti (devotion on Husband and God). Daily she used to bring water from Tungabhadra with a new pot freshly made up of sand. This was possible because of her devotion. One day she saw a king of Gandharvas taking bath in the river with his wives. She thought that they were living happily by the grace of God. She forget that the real happiness comes from the worship and not the materialistic wealth. Because of that sin she couldn't make the pot and went home with-out water. Jamadagni asked the reason. She told the truth. He became angry and ordered his first son to kíll Renuka. But, the son refused to kill his mother. Jamadagni asked his second and third sons. They too refused. But, the fourth son Parasu Rama killed his mother by cutting her head with his axe. Jamadagni was pleased and told that Parasu Rama can ask a boon. Parasu Rama requested to give life to his mother. Jamadagni rejuvenated her. The head of Renuka which is Maya rupa (Materialist thoughts) became Ekaveera (one of the 18 Shakti peethas) and the body of her which is Matru rupa (Mother of Parasu Rama) became Bhudevi. Bhudevi is present in a small temple in the campus of Bala brahmeswara swamy. She gives children to the wanted. She is worshiped by offering butter.

Dasara, Shivaratri and Bramhotsavams are celebrated in these temples. 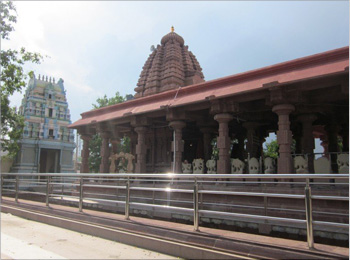 Jogulamba Temple is very famous and is one of the Ashtadasha Peethams (18 abodes of Mother). The temple was completely demolished during Muslim invasions and is recently reconstructed. Nava Brahma Temples are 9 temples dedicated to Lord Shiva. They date back to 6th-7th centuries CE. Only Bala Brahma temple is fully operational now. All the remaining eight temples are closed and are protected by Archaeological Survey of India. The architecture is worth visiting. River Tunga Bhadra flows nearby the temples. The elevated platform on the banks gives a picturesque view of the paddy fields.

The nearest airport is Hyderabad, Buses and trains are available from Hyderabad.

Alampur has a railway station, which is nearly 8 km far from the town and is situated on the main line of Hyderabad and Kurnool. Also, a small halt station called Jogulamba Halt; is situated near Alampur station, and only a few trains connecting Hyderabad and Kurnool halt at these stations. The nearest major railway station is at Kurnool which is at just 27 km from Alampur and all major trains halt here.

Alternatively, driving down or hiring a taxi would be an ideal option to reach the place easily. Buses are available from Hyderabad, Kurnool and Mahbubnagar.