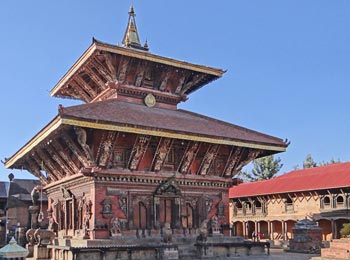 The Changu Narayan temple is situated on top of a hill called Changu or Dolagiri. Surrounded by dense champak (a variety of tree) forest on all sides, this ancient temple is located in the Changunarayan VDC of Bhaktapur District, Nepal. The Changu hill lies approximately 22kms east of Nepal’s capital Kathmandu and a few miles north of Bhaktapur. The presiding deity of this temple is Lord Vishnu. River Manahara flows very near this revered hill.

The Changu Narayan is regarded as the oldest temple of Nepal. It is one of the finest examples of Nepali temple architecture with rich embossed works. The temple is a roofed two-storied structure that stands on a high plinth of stone. According to Professor Madhan Rimal from the Department of Sociology and Anthropology, Tribhuwan University, the temple is neither built in the Shikhara Style nor in the Pagoda style. It has a unique architectural style which he says pertains to the typical Nepali temple architecture. This temples finds resembles to the famous Gokarna Mahadev temple in various aspects. The temple also houses numerous art works pertaining to Lord Vishnu. Separate shrines dedicated to lord Shiva, Ashta Matrika, Chhinnamasta, Kileshwor and Lord Krishna are found within this relatively large temple complex. The temple has four entrances, each having a pair of life-sized animal statues. The Dasavathara (ten incarnations) of Lord Vishnu and many other statues are intricately carved in the struts supporting the roof. The door at the entrance is beautifully carved with images of the Nagas (snakes). The temple’s main entrance that is located on the western side has a Chakra, Sankha, Kamal and Khadga at the top of a stone pillar. These stone pillars have many Sanskrit inscriptions which are regarded as the oldest inscriptions of Nepal. These inscribed stone pillars are supposedly erected by the Lichhavi King Manadeva in the year 464 AD.

Legend has it that during the ancient times, a Gwala (cow herder in Nepal language) had brought a cow from a Brahmin named Sudarshan. To his delight, the cow produced large quantities of milk. The Gwala regularly took the cow to the Changu hills which were full of Champak trees for grazing. On many occasions, the cow herd noticed that the cow rested in the shade of one particular tree. After bringing the cow home in the evening, he is said to have got only very small amount of milk on milking her. This pattern continued for several days while the Gwala was getting quite upset about it. Thus he decided to call on the Brahmin to inform him about the cow’s decreased productivity. In order to find the reason for the cow’s changed behaviour, Sudarshan and the Gwala decided to observe the cow's daytime activity while she was grazing in the forest. They hid behind the trees to monitor her movements while the cow went into the shade of that particular champak tree. To their surprise, a small black boy came out of the tree and started drinking the cow’s milk. The two men were shocked at seeing this sight. They considered the boy to be a devil living in that tree. Therefore, the Brahmin decided to cut down the champak tree. When he was swung his axe on the tree’s trunk, he could see fresh human blood coming out of it.

Sudharshan and the Gwala got worried witnessing this. They believing that they had committed a great sin by cutting the tree and this began to cry. At that moment Lord Vishnu emerged from the tree and assured that they haven't done anything wrong. The Lord also elaborated on how he had unknowingly committed a heinous crime by killing Sudarshan’s father while hunting in the forest. On killing the Brahmin, Lord Vishnu was cursed for which he wandered the earth. As his vahana ‘Garuda’ eventually descending on the hill at Changu, the Lord took shelter at that place and was surviving on milk given by the cow. When Sudharshan cut down the tree, lord Vishnu is said to have been beheaded, which freed him from his past sins.

On hearing this story from the Lord, the Brahmin and the Gwala decided to establish a small temple there for Lord Vishnu. Ever since, the site has been considered sacred. Until this day, Sudarshan's descendants serve as this temple priest while the Gwala's descendants are the ghutiyars (conservators).

One another legend dating back to about 400 years informs us of a mighty warrior named Pranjal who lived in this place. Even today, the warrior is believed to live here. Yet another famous warrior named Changu challenged Pranjal and defeated defeated him. This hill was thus named after the warrior Changu as a tribute to him.

The Changu Narayan Jatra is one of the major festivals of this temple. The ‘Mahashanan’ is yet another prominent festival here. On the day of ‘Jugadi Nawami’ and ‘Haribodhini Ekadashi’ special puja is conducted.

How To Reach Changu Narayan Temple

The nearest Railway station is the Kathmandu Railway Station.