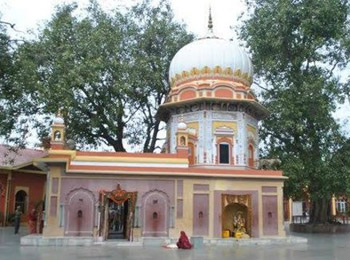 The Bala Sundri temple was built and established in 1573. It is located in Trilokpur in Himachal Pradesh. Trilokpur stands stoic on an isolated hillock, at an elevation of approximately 430 m and is home to an opulent temple dedicated to Goddess Mahamaya Bala Sundari which lures lakhs of pilgrims and visitors from all parts of Northern India with a majority of people coming in from Haryana and Himachal Pradesh. 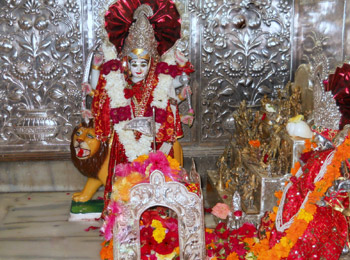 Bala Sundari Temple has great religious significance and it lies 17 km from Nahan and about 6 km from Kala Amb which provides the passageway to Nahan from bordering Haryana state. Easily accessible by road, this temple is famous for its fairs and festivals. Pilgrims look forward to participating in the Navratri fairs which take place in the months of April and October. During this period, thousands of devotees can be seen thronging the premises of the temple offering their reverences to the Goddess and enjoying the festive ambience. Trilokpur is named after the three Shakti temples located in the area. These temples depict the various faces of Goddess Durga. The main temple is the abode of Bhagwati Tripur Bala Sundri and depicts the childhood facade of the deity. The other temples are dedicated to Bhagwati Lalita Devi and Tripur Bhairavi respectively and are located in close vicinity of the main temple. A huge colorful gate welcomes all pilgrims to the renowned temple of Bala Sundari. This gate is located at a distance of 1 km from the main center or Shaktipeeth. En route to the main temple, tourists can also worship at Dhyanu Bhakt Temple. Most pilgrims prefer to leave their vehicles at this gate and walk up to the temple singing hymns and prayers dedicated to Goddess Durga. Pilgrims visiting Bala Sundari Temple also flock to a natural cave temple of Lord Shiva here. This cave temple contains geographical formations of stalactites and stalagmites and overlooks the ruins of the baradari (audience hall) and palace of Lehna Singh Majitha the governor of Kangra valley during the reign of the Sikhs. 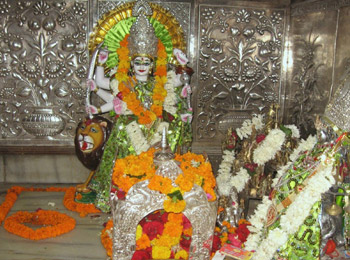 Legend has it that Maa Balasundari jee had appeared in the year 1573 at Trilokpur in a bag of salt brought from Devban ( UP) by a local shopkeeper Sh Ram Dass. The said shopkeeper kept on selling salt from the bag through out the day but the commodity did not exhaust and the bag remained filled as if nothing had been taken out there from . He was taken aback from the miracle and while in asleep in the night Goddess appeared in his dream narrated the incidence of her disappearance from Devban(UP) and directed to construct a Temple to establish her PINDI swaroop ,which was already existing inside the bag of salt and also directed to worship in the name of "MAHAMAYA BALASUNDARI" – an infant state of Goddess Vaishno Devi. Lala Ram Dass was not rich enough to construct the temple ,thus he decided to approach the then ruler of Sirmour state Sh.Pradeep Prakash who inherently agreed and got constructed a temple for the in capture of the Divine PINDI of Mata Balasundari jee at Trilokpur. Two Navratra Fairs are celebrated at Trilokpur i.e. one in the month of Chaitra (March/April) and another in the month of Aashwin( Sept/Oct.) .Lacs of pilgrims visits from Northern States like as Haryana, Delhi, UP, HP and other states to get the blessings of Mahmaya Balasundari Jee.

Two Navratra Fairs are celebrated at Trilokpur i.e. one in the month of Chaitra( March/April) and another in the month of Aashwin( Sept/Oct.) .Lacs of pilgrims visits from Northern States like as Haryana,Delhi,UP,HP and other states to get the blessings of Mahmaya Balasundari Jee.

Trilokpur is located in the Rewari district of Himachal Pradesh, has a semi-arid and dry climate. Tourists visiting this part of the country experience mean minimum and maximum temperatures ranging from 6 °C to 41 °C. Winters in Trilokpur are cold and dry with temperature charts showing single digits, which often dip to zero degrees during peak winters. Natives prefer to stay indoors during harsh months of late December and January. Weather is pleasant in early November and in later weeks of February-April. Pilgrims on their way to Bala Sundari Temple also like to experience lush green terrains in the rainy months of July to September. With average rainfalls hovering around 553 millimeters, Trilokpur is at its best during this period. Summers in the region can be hot and dry and pilgrims should avoid visiting Trilokpur in the months of May and June. Bala Sundari Temple is best visited in the months of Aashwin (Sept/Oct) and Chaitra (March/April) when festivities of Navratri add a lot of zeal and fervor in the ambience of its premises. Surroundings reverberating with chants of Goddess Durga and songs sung in her praise enchant pilgrims coming all the way from Delhi, Uttar Pradesh, Haryana, Himachal Pradesh and Punjab.

The nearest airports to Nahan are located at Chandigarh and Dehradun. Tourists and pilgrims travelling from from Leh, Delhi and Amritsar choose to fly to Chandigarh which is about 100 kms away from Bala Sundari Temple. Regular taxis ply between these airports and Nahan and provide easy means of communication for domestic as well as international travelers visiting the region.

Tourists desirous of availing rail facilities to Nahan, usually get off at Kalka, Chandigarh, Ambala or Barara. The railway stations in these cities/towns are well connected by road to the temples in Trilokpur. Some tourists prefer to travel by train to Yamunanagar and then onwards to Nahan. There are various trains ferrying to and fro from these locations. Located at a distance of 64 kms from Nahan, Ambala is the closest railway station in the area. Ambala is well connected by highways to most cities in India. Regular train services from Delhi to Ambala help tourists travel from the Capital city of India to the divine temple of Trilokpur.

Dehradun is well connected by road to Nahan--which is located at a distance of 65 km from the heart of the city.