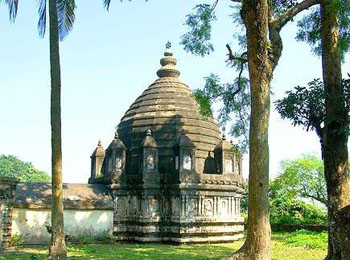 Aswaklanta temple is a well known shrine situated in North Guwahati. Located on the banal of River Brahmaputra , the temple was built by King Siva Singha in1720 A.D. King Siva Singha is a Ahom ruler who has built some of the biggest Hindu temples in Assam. This includes the renowned Shiva idol located in Sibsagar. Aswaklanta temple premise consists of two smaller shrines where one is situated on the foot hill and another located on the top of the hill namely the Kurmayanardan and Anantasayi respectively. 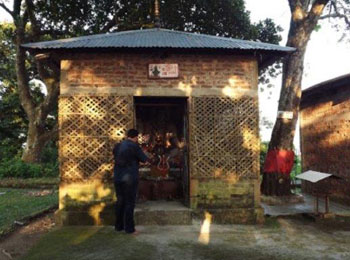 Many tales and legends surround the famous Aswaklantha temple. According to one of the legends, Lord Krishna was riding a horse, searching for the evil Narakasur to punish him. On his way, his horse felt tired on the particular place where the present Aswaklanta temple is situated. The meaning of the word Aswa means ‘horse’ and Klanta means ‘tired’ in the Assamese language. And hence the place came to be called Aswa-Klanta.

Another legend attached to this place states that the horses that belonged to Arjuna, during the kurukshetra war, were made to stay back in this place from entering battle field. This was a conspiracy to ensure that Abhimanyu, Arjuna’s son was killed in the battle field without any timely help. The name of this conspiracy plan was ‘Abhikranta’ in Assamese. From this word, the place was named ‘Aswa-krata’ which later became Aswaklanta in their local language. The ancient temple of Aswaklanta provides a visual treat for its visitors. A beautiful view of the majestic Brahmaputra river with the Guwahati city in its background is seen from the temple. The Aswaklanta temple was damaged in the great earthquake of Assam which occurred in the year 1897. However, it was renovated under the supervision the then Viceroy of Assam, Lord Curzon.

In the ancient times, there was a Kundra (a place of sacrifice) which was located near the temple. It was later eroded by the Brahmaputra River and does not exist anymore. The temple consists of two images, one of Lord Janardana and other of Lord Anantasai Vishnu. The Lord Anantasai Vishnu image is a fine art specimen dating back to the eleventh century. The temple has numerous stone inscriptions inscribed around it.

Since the primary deity of this temple is Sri Vishnu Bhagvan, festivals pertaining to Lord Vishnu and his ten incarnations are celebrated here with much galore. Janmashtami and Ashokastami are the two major festivals celebrated. Devotees throng the Aswaklanta temple in huge numbers during the festivals times and witness the various auspicious rituals that are performed to the deity.

How to Reach Guwahati

Guwahati has excellent road connectivity to nearby towns and citoes. The three major points - Adabari, Paltan Bazar and ISBT Guwahati provide bus services to towns and cities in Assam and its neighbouring states.