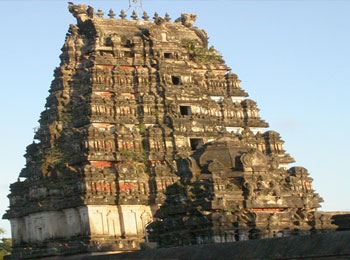 This temple is also recognized by its historical names of Thirukodi, Kuzhagar koil, Kodiyakarai, Kodiakadu. The place of the temple is called Kodiyakkadu and the place of sea is called Kodiyakkarai. It is one of the 276 Thevara Paadal petra sthalams and one of the Thiruppugazh sthalams. Saint Tirugnana Sambandar and Sundarar had sung the glory of the Lord of the temple in their Thevaram hymns.

Legend has it that Saint Arunagiriar had sung the glory of Lord Muruga of this temple in his celebrated Tirupugazh hymns. This is a very ancient temple. Mother Maiyar Thadanganni appears all merciful. The one different feature of the temple is that the Navagrahas in the temple are on a straight line witnessing the wedding posture of Lord Shiva with Mother. Kodiakadu being a jungle area, there is a jungle custodian deity praised as Sookadu Kizhal. While churning the milk ocean for the Nectar, the demons created a wild hurricane. God of Wind Vayu Bhagwan controlled the tempest. When the Nectar spilled, Lord Subramania (Muruga) held it in a Kalasa-vessel. He appears in this temple with the Nectar-Kalasa. People pray to him for longevity. Though a Lord Shiva temple, all prominence goes to Lord Muruga.

The sea route to Lanka is short from this place. Sugriva planned to build a bridge from here to Lanka to help Rama to cross the sea. But Lord Sri Rama disagreed with the proposal as Kodiakadu is behind Lanka and that would not be right or graceful to attack Ravana from behind and proceeded to Dhanushkodi being opposite to the front entrance of the island. He worshipped Lord Shiva here before proceeding to Lanka. Remembering this event, the foot prints of Rama is carved here. Lord Shiva in the temple is also praised as Amirtha Kadeswarar.

Navagrahas the nine planets are on a straight line in this temple. People pray to Lord for wedding, child boon and for excellence in education. Devotees perform abishek to Lord and Mother and offer vastras.