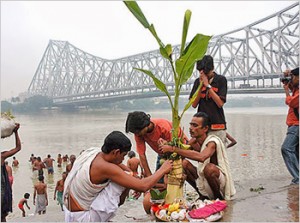 Navpatrika Puja day is also known as Maha Saptami. It marks the first day of Durga Puja. On Bilva Nimantran day it was Bilva Tree or its branch in which Goddess Durga was invoked before giving Her Puja invitation for the next day. On Maha Saptami day Goddess Durga is invoked in a group of nine plants known as Navpatrika. Navpatrika is formed by bundling nine different plants including the branch of Bilva tree of the previous day. After that Navpatrika is given a ceremonial bath in a water body preferably in a river, adorned with a red or orange colored cloth and installed on a wooden seat on the right side of image of Durga. Maha Saptami Puja begins with Mahasnan. For Maha Snan a mirror is placed on a platter in such a way that the reflection of the Goddess Durga is seen in the mirror. It is the refection of Goddess Durga in the mirror which is given the ritualistic bath using various materials. After bath ceremony the ritual of Prana Pratishtha takes place in which image of the Goddess Durga is consecrated and divinized. Prana Pratishtha is followed by Shodashopachar Puja which is an elaborate worship with sixteen different Puja items.

The seventh day of Durga Puja is concluded with Devi Bhog and Aarti. In West Bengal Navpatrika Puja is also known as Kolabou Puja and also spelled as Nabapatrika Puja.