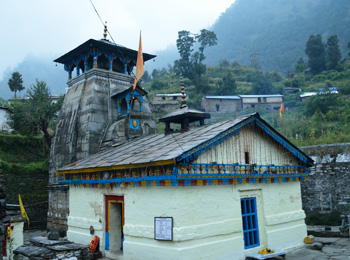 This temple is a well known Hindu Pilgrimage centre located at Triyugi village in Rudraprayag district of Uttarakhand state. The main deity is Lord Vishnu. Hindu scriptures narrate this is the place where Lord Shiva and Parvati got married in front of Lord Vishnu, so Triyugi Narayan Temple was built here. This temple offers panoramic views of snow covered mountains with beauty of Garhwal hill region and is located at height of 1980 metres.

This temple resembles the temple of Kedarnath in architectural style and hence attracts a lot of people and is also called as Akhand Dhuni temple. The temple is believed to have been built by Adi Shankaracharya. Before entering, outside in the prakara (corridor) one can find a small temple of Pancha Nama devatas: Goddess Annapurneshvari, Lord Ishaneshwar, Bajrang Bali, Lord Shankar and on the dwara (door) there is Lord Ganesha’s idol. Right above the entrance on the gopuram, below the flag, one can see Garuda with folded hands.
Also present are idols of Badri Narayan, Sita Ramachandra, and Kshetrapal Kubera. There is a akhanda jyothi burning inside the sanctum sanctorum. In front, there is an idol of Shiva and Parvati blessing devotees in newlywed form. Outside, there is a saligrama shila (black fossil stone) of Sriman Narayana in sleeping posture with goddess Lakshmi and Lord Ganesha. In front of the sanctum sanctorum, the havana kund (fire sacrifice) with the eternal flame is present. One can offer samidha (sacrificial offering of wood), which is available next to havan and did Astakshari homa and collect the ashes as blessings.
The Triyugi Narayan Mela is held annually on the Shukla Paksha Dwadasi, 12th day of waxing moon in the Bhadrapad month. Also, there is a cave dedicated to Gauri at a distance of 2 km from the temple.
A stone called the Brahma Shila in front of temple is the exact spot of the divine marriage. Situated near the temple are the ponds of Rudra Kund, Vishnu Kund, Brahma Kund and Saraswati Kund are other holy spots. A stream called Saraswati Ganga originates in the courtyard of the temple and fills all the holy ponds nearby.

The temple houses a silver, 2 foot image of god Vishnu (Narayana), accompanied with goddess of wealth Lakshmi and the goddess of music and learning, Saraswati.

According to mythology, goddess Parvati, daughter of Himavat or Himavan, the personification of the Himalayas, was the rebirth of Sati, the first wife of Shiva, who sacrificed her life when her father insulted Shiva. Unsucessfully, Parvati initially tried to allure Shiva by her beauty. But, she won Shiva by performing a rigorous penance at Gauri Kund, which is 5 kilometres (3.1 miles) away from Triyuginarayan village. Devotees visiting Triyuginaryan temple also visit the Gauri Kund temple, dedicated to Parvati. Legend states that Shiva proposed to Parvati at Guptakashi, on the road to Kedarnath, before they married in the small Triyuginarayan village at the convergence of rivers Mandakini and Sone Ganga.
The Triyuginarayan is believed to be the capital of Himavat and the venue of the celestial marriage of Shiva and Parvati, during the Satya Yuga, in the presence of the holy fire that still burns eternally. Lord Vishnu formalized the wedding acting as Parvati's brother in the ceremonies, while the creator-god Brahma acted as the priest of the wedding. The exact location is marked by a stone called Brahma Shila. The uniqueness of this place is also recorded in a sthala-purana (a scripture specific to a pilgrimage centre). According to it, pilgrims consider the ashes from the burning fire as divine and carry it with them. It is believed that ashes from this fire are supposed to promote conjugal bliss.
Before the marriage, the gods took bath in three ponds namely, Rudra-kund, Vishnu-kund and Brahma-kund. The inflow originated from Vishnu's navel. So, the water of these kunds is considered to cure infertility.

Triyugi Narayan Temple is located at around 6 Km trek from Sonprayag or 5 Kms by road and then 3 Km by trek.