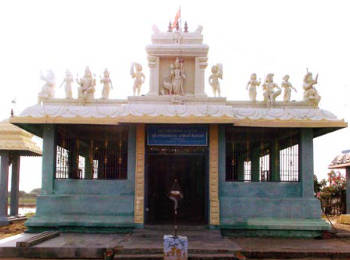 The Prime Deity’s vimanam has three kalasams. Opposite to the temple at a distance is the Bay of Bengal. On the four sides of the Gopuram, the different stages of Lord Muruga are depicted. There is a mani mantapam in the prakaaram of the temple.

The Lord facing the sea is sitting on the peacock with his right hand raised, blessing the devotees, without his consorts Valli and Deivanai.

Many years ago, a man without any belief in God was living there. Once he became very sick and bed-ridden for many days. Though treatment was given to him, there was no effect. At a stage, the doctors declared that his life would come to an end soon. Everyone was very sad. The man at that time felt that Lord Muruga appeared before Him sitting on the peacock. He got up from his bed, called his relatives and said: “I’m hungry; give me food!” When he was given food, he ate it and said that he was completely cured. The relatives were surprised. After a few days, this devotee erected a temple to Lord Muruga, the image sculpted in the form revealed to the man. He is the Lord Vetrivel Murugan here.

The festival of Vaikaasi Visaakam is celebrated with much fanfare. At that time, the Lord appears on the swing (Unjal). Special Abhishekams are performed on Krithigai, Kandasashti, Thaippoosam and Panguni Uthiram days. Once during the Panguni Uthiram festival, a devotee offered a coconut to Lord Muruga and when it was broken there were 4 clefts in it. The coconut is still kept in the temple.

The belief is that those who have no children, dumb persons, those affected by diseases and those who want to improve their speech capacity, will benefit if they pray to this Lord Muruga.

In this temple a ritual, “Vetrilai Thudaippu” (wiping with betel leaf) is conducted to those people who face obstacles in getting married. They are asked to sit near the flag-post and are given the betel leaf offered to the Lord. Then, they sprinkle the abishekam water on the leaf. The devotees wipe their faces with that betel leaf and worship Lord Murugan. It is believed that by conducting such a ritual, marriage will be celebrated soon. Betel leaf is one of the sacred things. By wiping the face with the betel leaf, the evil effects will be wiped off and benefits will be bestowed – on the basis of this faith, this ritual is performed.

Those who have no issues offer three turmeric tubers and a lime fruit to Vetrivel Murugan and worship Him. The same is given back to them as prasaadam. Both the couple should drink lime-juice, and the lady should take bath everyday applying the turmeric paste. The belief is that they would be soon blessed with children.

Pepper prasaadam: Those who suffer with long time disease pray for speedy recovery. The temple distributes them Pepper prasaadam offered to the Lord. The belief is that they will be cured of their disease, if they powder the pepper, mix it with water or milk and drink it regularly. The same prasaadam can be taken by dumb persons, and also by those who want to improve their speech ability.

This place can be reached by traveling 1km. in the left turning road from Killai, which is about 14 kms. in the Chidambaram-Pichavaram (tourist spot) route. Every half an hour buses (3, 3A, 35) ply from Chidambaram to Mudasalodai, which pass this city.

The temple is open from morning 6.00 to 12.00 noon and from 4.00 pm to 9.00pm. On Tuesdays and Fridays, if there is heavy crowd, the temple is kept open till midnight or even till the next morning.