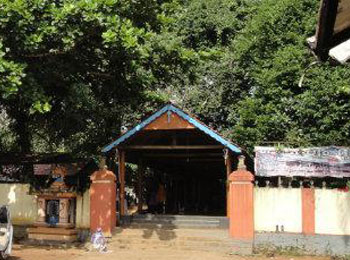 Sree Nagaraja Swami Temple at Vetticode was sanctified by Lord Parasurama. The temple is located near Kayamkulam in Alappuzha district of Kerala. It is visited by hundreds of devotees every day. The temple is located on a six-acre land in the middle of lush green surroundings. The Sarppakkavu (serpent grove) here has Nagaraja and Nagayakshi as the principal deities. It is a haven not only for the snakes, but also for several varieties of birds. 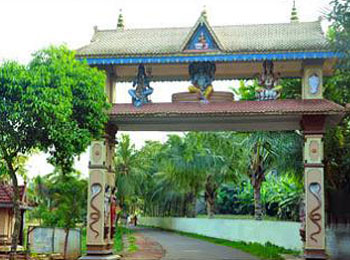 The complex housing the temple is situated in the middle of high grown copses, thick bushes and shrubs of high therapeutic value, on a six-acre land. It is nothing but the Sarpakavu (the serpent grove) as it is locally known as. Calm breeze, blowing through the shrubs and flowers carry a fragrance that can be only experienced. One can listen to the chanting of Vedas, Sookthas and Manthras by the departed spiritual souls. The sound of footsteps and silent movements of ones who had sanctified this temple and his associates; like the sages, is believed to be heard even today.

The smell of the flowers offered to the deities, the sandal sticks of camphor and ashtagandha adds to a uplifting spiritual experience at this temple. The continuous glow of the kedavilakku, the radiance of the nilavilakku and thookkuvilakku; the rhythmic playing and sounding of various musical instruments followed by the magical spell of the nadaswara and panchajanya which sounds Ohm along with the manthras and sookthas from the throats of tens and thousands of devotees who assemble here every day and night creates an atmosphere of unity, irrespective of caste and creed, rich and poor, young and old. Undoubtedly, it is an abode of heaven and a heaven on Earth.

The temple has Sri Parameswaran Nampoothiri as the Karanavar (chief), who has devoted his life to the betterment of Sree Nagaraja Swami Temple.

Aadimoolam Vettikode Nagaraja Swamy is one of the sacred temples of snake worship which is located in Vettikode of Alleppey district in Kerala. The temple belongs to Indian style architecture by an unknown dynasty who constructed centuries ago.

There are two ponds inside the vast grounds of the temple. One is situated on the southern side and the other one is located on the south-eastern side. These ponds remain filled in all seasons. As per the legend, when Lord Parasurama heaped the land for the temple, he took the land from the spot where the pond is currently located. It is believed to be holy. According to a common belief taking a dip in the ponds frees the devotees from all kinds of skin troubles and other illnesses. The water in the pond contains therapeutic quality because the water touches the roots of the curative trees in the Kavu. 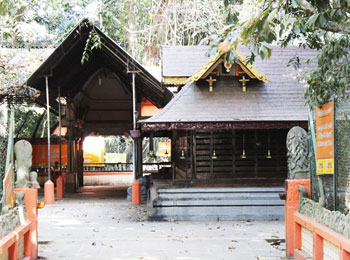 The prime deities are Nagyakshi “The king of snakes” and Anantha which is considered as Nagaraja by Vashnavites. Sivites believes the Nagaraja is Vasuki which is around Siva’s neck

From time immemorial Kavu or Sarpakavu has been related with the place of worship of Anantha or Adisesha, the snake bed of Lord Vishnu, as the main deity. The importance of Sarpakavu is difficult to be defined in words. It has scriptural, ancient and logical associations. It is a sure sanctuary for Serpents or nagas; where one can envisage the existence of God.

The Sarpakavu at Vetticode has a special implication. It is the house and breeding place of tens and thousands of birds, animals and serpents. In the middle, one can see a deep pond and the idols of Nagaraja and Nagayakshi – Purusha and Prakrithi. The noiseless and furtive movements of the serpents along the branches of the trees and groves are a sight to observe.

The snake king is very important to Lord Vishnu, Shiva and Krishna according to the Hindu mythology. In the painting and stone pillars of the temple are decorated as lord Shiva wearing snake Vasuki, as lord Krishna sitting in on snake and Lord Vishnu is resting on Nagaraja.

On the southern part of temple near the pond is the Agama Sarppakkavu. The area is covered with thick growth of herbs, shrubs and bushes – a green lodge for the Agama Serpents. The Krishna statues of Nagas, once worshipped elsewhere, but later disposed are taken to this Kavu after taking back its effect and the divine power by the Karanavar of the temple and placed appropriately in this Kavu. Hence, it is called Agama Sarppangal.

According to the local folk, Sage Vasukumitra performed his penance at this place and got blessed with great powers and granted for ultimate salvation and he constructed the temple. Legend believes that Parasurama consecrated Sree Nagaraja Swami Temple at Vetticode and Nagaraja who once visited the Mrityaloka the earth created this temple which is now located in the forest.

Aayilliya Mahotsavam at the Vetticode Sree Nagaraja Swami Temple falls on the day in the Malayalam month of Kanni, every year. The celebrations starts seven days prior to the Aayilliyam day. On these days, several special poojas, homas and kalasa poojas are accomplished to increase the deity’s power and the power to bless the worshippers.

At the temple of Vetticode, Sree Nagaraja Swami during the time of Sivarathri Angas, Navaka, Sree Bhoothabali and special poojas are done year after year. The main importance of Sivarathri here, is to portray the close relationship with Lord Anantha Rudhra.

It is a ceremonial activity held for Nagas and Ashta Nagas on particular days excluding Ekadasi day.

Special offering is givne to the deity to get free from all the illness and ailments caused by the wrath of Rahu or Nagas in Rahur Dasha.

The Nearest railway station is Kayamkulam, Mavelikkara and Chengannoor.

While coming from Thiruvananthapuram and Eranakulum via NH47 after reaching the K.S.R.T.C Bus Station at Kayamkulam, one should take the eastward going Kayamkulam-Punaloor road. Travel for 11 km to reach the temple.

While coming from Main Central (M.C.) road one can reach the Adoor K.S.R.T.C Bus Station and from there travel 17 km westward to reach the temple via the Punaloor-Kayamkulam route.