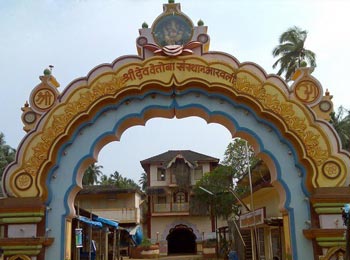 Shri Dev Vetoba Devasthan of Aravali is one of the most famous 'jagrut' (Lord who fulfills the wishes of devotees) temples in Vengurle taluka of Sindhudurg district in Maharashtra, India. Shri Dev Vetoba is the God of Aravali village in Konkan. Natives of this picturesque, tranquil village straddling the Arabian Sea worship Shri Dev Vetoba as their protector. They believe He brings prosperity to the village. 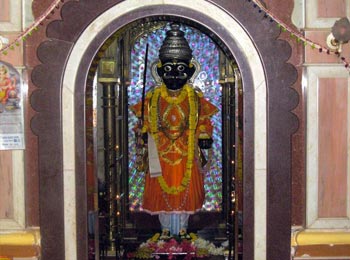 Vetoba’s magnificent idol is fashioned out of ‘panchdhatu’ (5 metals). It is bigger than life-size, 9 feet 2 inches tall, and faces north. Vetoba is standing, in all his glory and power, with a sword in his right hand and an agnipatra (small utensil) in his left. In the temple's sanctum sanctorum, Vetoba's idol is flanked by idols of Shri Dev Bhummaiyya, Shri Dev Purwas, Shri Dev Rampurush, Shri Dev Baracha Purwas (Nirakari) and Shri Dev Bhavkai. 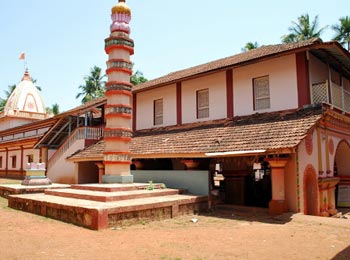 Konkan's Vetoba is a God that observes the purity and rigours of Brahma worship. He is the manifestation of Lord Shiva. He is a King. He is the King of ghosts, who controls evil entities like daemons, apparitions, pishacchas etc. Ghosts make up his army, but he is not a ghost himself. He is their King.

Any record of Aravali’s Shri Dev Vetoba is incomplete without reference to Yogiraj Bapumama Keni. In 1730, Bapumama Keni, a spiritually advanced saint, arrived in Shiroda, and stayed at Harbanna Kamat’s house for 40 years. He used to worship Vetoba as Vitthal, the avatar of Lord Krishna. One day when he was standing in front of Vetoba with folded hands, a small bright flame emerged from the Deity’s heart, moved through the air and stood still in front of Bapumama Keni’s heart. It was as if Vetoba was signifying that He and Bapumama Keni were one. This is a true incident that has been widely reported.

So spiritually close was Yogiraj Bapumama Keni to Vetoba that his anniversary programme called ‘Bapumamacha Padwa” is celebrated every year. It takes place on Jeshtha shuddha pratipada at the residence of Gajanan Pandurang Kamat at Shiroda. In honour of the occasion, it is the tradition to send from Aravali’s Shri Dev Vetoba Devasthan members of Joshi, Haridas, Puranik families, together with vajantri (troupe with instruments) and the temple gurav to Kamat’s residence at Shiroda.

During the first half of 17th century, Shri Bhummaiyya brought the 2 idols from their hilly abode and installed them with his ‘shabri’ vidya at their present location. He installed Vetoba as the manifestation of Lord Shiva. Since then, Vetoba and Devi Sateri have been worshipped in Aravali as the village God and Goddess respectively. This was the beginning of what today is famous as Shri Dev Vetoba Devasthan. And other temples were included under its fold.

After the defeat of Vijaynagar’s Hindu reign, the region came under Bijapur’s Bahamani rule. Later, Chhatrapati Shivaji Maharaj launched his battles to establish independent Hindu nation. During this time, to deter Sawantwadi’s Raje Srimant Lakham Sawant from joining Shivaji’s side, Bijapur’s Adilshah gifted Raje Srimant 8 villages in 1664. Aravali was one of them. (According to history of Sawantwadi published by Vitthal Purushottam Pingulkar in 1911). From that time, Sawantwadi’s Royal family began worshipping Vetoba.

Devotees in thousands pour into the village from far and wide to seek Vetoba’s darshan and blessings during His 2 big annual festivals: on Margshirshya shuddha pratipada (Devdipavali) and His investiture-day festival on Vaishakh shuddha panchami. The festivals are celebrated with great devotion, enthusiasm and fanfare. The temple is decorated with flowers and lights. Dazzling fireworks light up the sky.

Vetoba is offered bananas or banana bunch (ghad), sweets such as sugar, pedhe, laddus, a pair of dhoti, uparana as naivedya. There is also a tradition of offering Him a pair of new chappals made from special leather which is available only in Aravali. Natives believe that Vetoba acts as the caretaker and protector (rakshankarta) of their beautiful village, perambulating its paths in the night wearing the chappals.

In Konkan, there is a tradition of asking for Vetoba’s ‘prasad’, a worship ritual popularly known as ‘kaul’. In essence, ‘kaul’ is designed to seek specific answers from Vetoba for varied personal problems. So, in a ‘kaul’ 33 leaves of ‘salai’ tree are stuck to various specified parts of Vetoba’s idol, each one imbued with certain meaning. And village mavens interpret the answer from the leaves that Vetoba drops down. And then they guide the answer-seekers accordingly. From the time Vetoba’s temple was first established in early part of 17th century, this age-old tradition has continued till date. Vetoba is known to give exact answers that come unfailingly true.

How to Reach Aravali