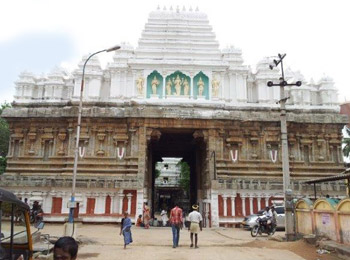 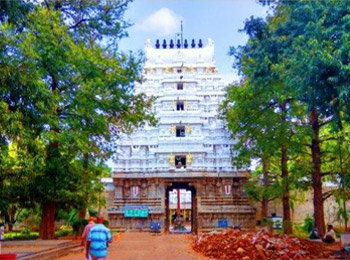 There is an Interesting event that became popular is that the Sunray’s fall on the Lord during the Sunset (6pm to 6.15pm), as the Idol of Lord Vedanarayana Perumal is facing towards west. In this ancient Lord Vishnu temple, Sunray’s fall on the feet of Idol on the first day, on the chest on the second day and on forehead on the third day during 12th, 13th, 14th days of Phalguna masam (March), when Float festival is also celebrated.

Other Shrines in the Temple

An Idol of Goddess Sri Maha Lakshmi with the name of Sri Vedavalli Tayaru is present at this shrine, besides the main temple.

There is an Idol of Lord Vishnu in the form of Lord Sri Lakshmi Narasimha Swami can be seen at this shrine, beside the main temple.

There is a small temple for Sri Sita Lakshmana Sameta Ramulavaru besides the Main Temple of Vedanarayana Swami. In this sub temple Idols of Goddess Sita, wife of Sri Rama along with the Lakshmana swami, brother of Lord Rama are present here.

History of this ancient temple of Sri Vedanarayana Swamy in Nagalapuram starts from 14th Century CE. This temple was believed to be built during the period of Vijayanagara Empire. We can observe the sanctum sanctorum of this temple housing an image of Matsya form of Lord Sri Vishnu. The image of the Lord Vishnu holding sudarshana chakra in ready to use posture is a spectacular feature of this temple. Structure of this ancient temple resembles the Vijayanagara style of temple vastu.

Legend of the Temple

There is a common belief that the Lord Vishnu has killed the demon Somakudu to retrieve Vedas from his control at this place. The demon Somakudu has stolen Vedas coming out from the mouth of Lord Brahma while sleeping with his mouth kept open and hid himself in the deepest of the oceans. Fearing the worst, Devathas prayed Lord Vishnu to do something and retrieve the Vedas stolen by Somakudu. It was mentioned in the Puranas that Pralayam occurs at the end of every Kalpa and creation is again started by Lord Brahma with the help of plants, seeds, herbs and animals so that they would continue to exist in the new creation. The duty to collect all these necessary plants, seeds, herbs was given to King of Dravidas a “Satyavrata” one of the devotees of Lord Vishnu. So, Satyavrata who was later known as Manu was offering water during Sandya Vandanam to complete his responsibilities given by devatas. At the time of Sandya Vandanam by Satyavrata Lord Vishnu existed in the form of a small fish in the hands of Satyavrata. But Satyavrata was not able to bear the Fish came in to his hands. Later he found that Lord Vishnu has appeared as fish in his hands and prayed him to know the reason. Then Lord Vishnu left from Satyavrata replying him on the occurrence of Pralayam. Lord Vishnu also told him to get in to the spacious boat that come to you by collecting all variety of seeds, accompanied by Seven Saints along with Serpent Vasuki and other animals. So, Lord Vishnu completed his mission to recollect Vedas from Somakudu by returning to water from Satyavrata’s hands. Later Lord Vishnu gave Vedas to Brahma to create life with the help of Satyavrata. Pralayam started with the ocean began rising and a boat came near Satyavrata. Then Satyavrata tied the boat to the fish he left in the ocean using “Vasuki” as rope and sailed on rising oceans with his collections throughout Pralayam. Thus Lord Vishnu saved the mankind from Pralayam known as dissolution. Matsya Puranam, the collection of answers given by Lord Vishnu to the questions raised by Satyavrata and other sages has evolved during this time. A temple was built at this place commemorating the retrieval of Vedas by Lord Vishnu in the form of Fish or Matsyavatara.

Several special poojas and festivals will be conducted in this ancient temple namely, Surya Pooja Darshanam during 5.30PM to 6.30PM on everyday from March 24th to 25th. Thiruveedhi Utsavam: During 6.30PM to 8.00PM on the occasions of festival days.

This is one of the auspicious ceremonies conducted on every day in this temple during 10:00 AM to 11:00 AM