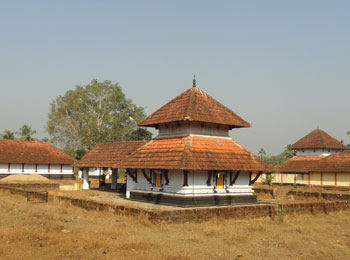 The temple of Sri Varaha Swamy was built in 1565 A.D by Azheekal Yogakkars (G. S. Brahmins of Vypeen) and the the idol installation was done by Swami Yadavendra Tirtha, first Pontiff of Shri Kashi Mutt. It is understood to be the first GSB temple in Travancore-Cochin area. This renowned temple is located in Cherai main village and is just a km away from the beach of Cherai. The temple is well-known for its grand chariot, which is drawn by thousands of devotees during the biannual Rathothasava festival. 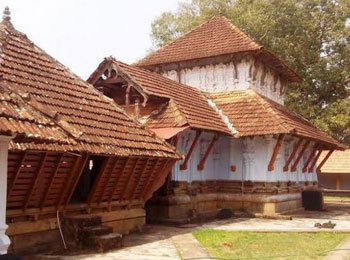 The temple has a large open ground in the front, unlike therest of the GSB temples in Kerala, which is typical of major temples of Kerala like Trichur and Kottayam. The Varaha Swamy temple has a roofed Seevelipura (a roofed pathway) around the nalambalam. Such a construction is not seen in other temples. The devotees also can go around even in rain and also during hot summer. Lord Varaha Swamy is taken around the temple along the Seevelipura. The dwaja with festooned roof (dwaja mandapam) with wood carvings is a exclusive feature of this temple. The Dwaja was constructed in 1900 AD. 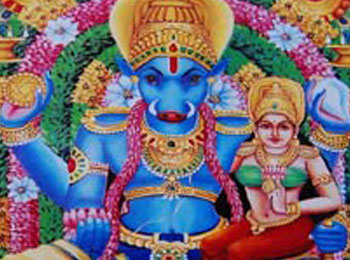 Lord Varaha Swamy is the principal deity of Azheekal Sree Varaha Moorthy temple situated in Kerala. Sree Venkatachalapathy is installed along with with Lakshmi Devi and Bhoomi Devi on left/right side in the Srikovil. Sree Varaha and Sree Venkateswara are installed side by side and worshiped as single moorthy. The other presiding deities in the temple are God Venkateshwara, God Hanuman, God Vinayaka, Goddess Mahalakshmi, God Garuda, God Mahadeva and Goddess Durga. 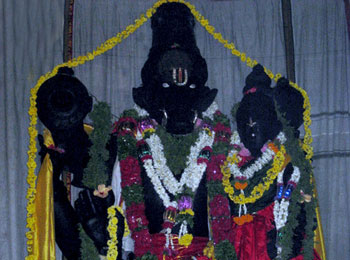 There were about seven families who had migrated to Cochin from Goa in 16th century These families settled in Azheekal in the Vypeen island, near Cochin. Krishna Prabhu, a wealthy merchant among them, was in possession of the two idols of Sree Varaha and Sree Vithoba. Both these idols were temporarily installed at Azheekal and worshipped. Sree Varahaswamy soon became the Gramadevata of the Azeekal community. Krishna Prabhu bought wide range of plots of land at Vypeen from Paliyath Achan. A new temple was constructed at Azheekal and the idol was consecrated in 1565 AD by Sri Yadavendra Tirtha Swamiji, the first pondiff of Kashi Mutt. The temple came to be known as Sree Varahaswamy temple.

During the first settlement, four temples were built at Azheekal. These temple included the deities Sree Varahaswamy, Sree Vitobha of Kasyapa gotra, Betala of Kaudinya gotra and Sree Gopalakrishna of Bharadwaja gotra.

The Sree varaha temple was initially situated at one and a half km to the west of present Mallikarjuna temple at Vypeen near the St. Teresas Church. This place is known as Teresa's Strait - now a tract of shallow water. On eastern side of the temple was the Paliyam Katchery. On the southern and northern sides were the small temples of Sree Vitobha and Sree Betala. The Sree Gopalakrishna temple was initially located at Elankunnapuzha.

It was later moved to Ernakulam. The idol of Betala was shifted to Cherai and installed in the house of Anantha Vadyar.

The idols in the temple at Azheekal were stolen in 1723 AD and could not be found. Efforts were made to make new idols in Panchaloha but were found faulty. So, the mahajans of Azheekal reached out to the Cochin temple and got two idols of Venkatachapathy and Mahalakshmi which were installed in the temple by 1724 AD. Extensive plots of land and properties were given to the temple by 32 families of the Yogakkars to manage day to day expenses. Later on the stolen idols were recovered and were was also installed in the temple next to the idol of SreeVenkateswara. After the installation Sree Venkatachalapathy was given more importance and the annual flag festival was celebrated specially for him. In 1857 AD, a major fire occurred in the temple. However, the temple was re-built shortly after.

The temple at Azheekal was very close to sea shore. Due to incessant sea erosion and high tides, the temple and the local community underwent many losses. Many Yogakkars left the place in 1866 AD and relocated to nearby places like Kuzuppally, Cherai, Ernakulam in the state of Cochin and also to places in the state of Travancore. The mahajans bought land in Cherai in 1867 AD, built Agrasala and installed the idols moved from Azheekal. The old temple at Azheekal was also dismantled and transported to Cherai.

This temple was then constructed and Prana Prathista of the idols were done in 1880 AD. This event was graced by Paliyath Achan representing the Maharaja of Cochin. The eastern gopura, Anapandal, Agrasalas, the temple tank (Sree Varaha Pushkarani) were successively built. The Vahanas - Aswavahana, Simhavahana, Hastivahana and Garudavahana were also made and offered to the deities.

In the year of 1897 AD, the temple was hit by lightning. A devaprasnam was conducted and as revealed, Sree Varaha Swamy was henceforth treated as the presiding deity and annual flag festival commenced to be celebrated for him also, from the following year.

The temple currently possesses paddy fields in Kumbalangi near Thuravoor. The fields are leased out every year for aquaculture which help in earning income to maintain the temple.


The festivals take place twice in a year. The Ratholsav is a specialty and attended by devotees in great numbers. The chariot is taken around the temple by devotees.


It is situated in the Vypeen island of Cochin, about 25 kms from Cochin City. It is one hour by road from Ernakulam via the freshly built Gosree bridges. One can also take a boat from High Court Jetty or Fort Cochin to Vypeen. It takes around 40 min by bus from Vypeen. The temple is at a distance of 100m from Cherai junction.