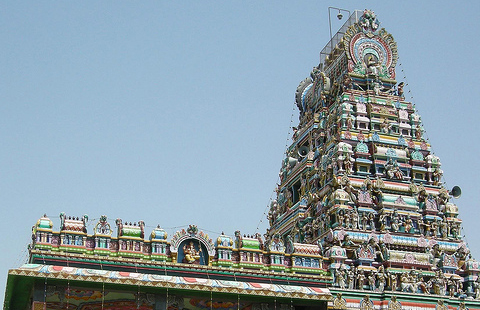 Vallakottai Murugan temple, This is a very old temple of more than 1000years constructed by King Bageerathan, who was ruling Sankondpuram of Ilanji Kingdom. The temple has main Raja Gopuram of five tiers with a big mandapam to front. People from various places visit this temple during festival days. Frequent bus facility is available to the village from Tambaram and Sriperumbudur. The Subramaniya Swamy idol in this temple is the tallest Lord Muruga statue in India.The temple has a tank, known as Vajra Theertham which is believed to have been established by Vajra-ayudham of Lord Indra. Lord Indra used this tank to worship Lord Subramanya. This temple also houses the statues of Sri Vinayagar, Sri Ambaal, Utsava Murugar and Sri Shanmugar. Carvings of Thapas Kamakshi and Lord Rama embracing Sri Anjaneyar can be found on the pillars of Ardha Mandapan. Timings: 5.30 am- 1pm and 3 pm- 8.30 pm.

The amin deity is Lord Murugan. The temple houses a 7 feet long statue of Lord Murugan which is the tallest idol of the God in Tamil Nadu. The idols of Teyvayanai and Valli, consorts of the Lord Murugan, are placed on his either sides.

The Temple was as of late remodeled. Individuals from different spots visit this temple amid celebration days. The Subramaniya Swamy symbol in this temple is the tallest Lord Muruga statue in India. The temple is accepted to be 1200 years of age. Long prior, the place was accepted to be possessed by an evil spirit called vallan. It was thought to be his fortress. After hearing the devas trial and mistreatment on account of asura, master muruga chose and crushed the assuran to reestablish the peace and success. According to the desire to die of assuran, he favored the place with the name Vallankottai. In course of time, the name got to be Vallakotai. In the eight tunes of the Thirupukazh, sung by Arunagirinadhar, the place has been alluded to as Kodainagar. The temple has a tank and tit is known as Vajra theertham. Individuals firmly trust that a heavenly plunge in the tank with the droning of the mantra OM Saravanabhava would end all torments. The Vallakkottai or the Kodai Nagar temple was worked by ruler Bagiradha in appreciation for His heavenly beauty. Vallakkottai Murugan is in this way known as izhandha selvangalai meetuth tharum arulmigu kodayaaNdavar He who reestablishes all that is lost. It is likewise said that the place owes its name to a monster by name Vallan, who struck dread in the psyches of individuals. They took asylum in Lord Muruga and he annihilated Vallan. Since this was administered over by Vallan for quite a while, it keeps on being known as Valla Kottai fortress of Vallan.

The temple has gold, gems, jewels, and rubies, silver vessel and other exorbitant articles worth numerous lakhs of rupees. Each Thursday, Lord Subramaniyaswami is enriched with Diamond Vel. The day of Krittika is vital and a great many individuals love the Lord each month on this day. The principle celebrations are the Brahma Utsavam, Skanda Shashti and the celebration of Subrahmanya's marriage with Valli.

A well known occasion played out a couple of years prior is the Sri Subrahmanya Sahasranama (1008 names of Subrahmanya) Archana. A Sahasra namamala, a wreath of gold coins on each of which one of the 1,008 names of the Lord was recorded, was made and offered to the god. Aficionados from far and close in expansive numbers took an interest in this blessed and devout act.

Here likewise explorers convey Kavadis to the holy place and abhishekams are performed to the symbol for the aficionados. Showering of the divinity in blessed fiery remains, known as Vibhuti Abhishekama is a component here as in palani temple, and in that Abhishekam the icon has an extremely charming and spectacular angle.

The important festivals conducted in the temple are

How To Reach Kanchipuram