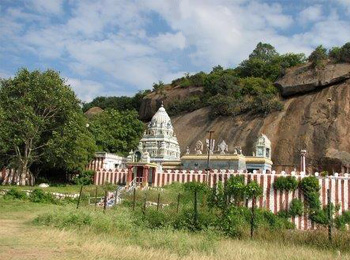 Ramgiri is a small village, famously known for Ramgiri hills which is a rocky hill formation interspersed with dense vegetation located in Chittoor District, Andhra Pradesh, India. This place, also called Kalinga Madu Karai or Thirukaarikkarai is about 5 km from Nagalapuram. 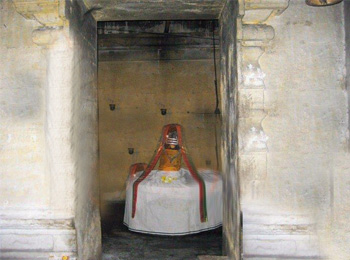 There is no Rajagopuram (tower) or flag post in the temple. The temple is divided into two divisions. The first has Bhairava as the main deity whereas the second has Shiva Lingam named as Valeshwara as the main deity. The temple pond situated in front of the temple is called Nandhi Theertham. A small Shiva Lingam with a Nandhi is there nearby. The Nandhi’s front half is seen protruding from the wall of the pond. Water originating from the hill, reaches a small well and from there comes out of this Nandhi’s mouth into the pond. Villagers say that they have never seen this water flow stop. They are also not sure about the source of the water. It is of medicinal value, treating neurological problems. Near the Nandi, you can find a small Shiva Lingam idol. There is also a shrine for Lord Ganesh. Behind this, one can find the steps to the hill top temple of Subrahmanya.

The other part of the temple is dedicated Lord Shiva named as Valeshwara. He is in form of a Lingam slightly slanted. Opposite is a small Nandi idol and Hanuman idol. There is also another big beautiful Nandi idol. The entrance of Shiva main shrine has two big idols of Dwarapalakas (gate keepers). Ganesh and Chandramouleeshwarar (Shiva Lingam) are also found in the entrance.

The corridor has a lot of idols on the platforms and walls, of Brahma, Vishnu, Subrahmanya (Shanmugar), Veerabhadra, Durga, Surya, Chandikeshwara, Sapta Mata, Dakshinamoorthy, Ayyappa, Anjaneya, and Appar. The idol of the saint Agasthya is found in a different posture. There is an idol for Ganesh named as Gajamukha. The idol of Veerabadhra in the sitting posture is a rare one. The idol of Ganesh near the entrance of main shrine is also different. A separate shrine for the Goddess of the temple Maragadambika is there. On the wall, one can find a small carving depicting the scene of Hanuman pulling the Shiva Lingam.

In South India it is very rare to find a temple with Bhairava as the main deity. This is one rare temple having a tall magnificent idol of Bhairava in the main sanctum sanctorum. You can find the idol of dog in front of the main shrine, as dog is the vaahan (mount) for Bhairava. Adjacent to Bhairava shrine, there is a separate shrine for the Goddess Kalikaamba. The corridor surrounding the Bhairava shrine has small idols of Bhairava in various postures on the walls. The entrance of Bhairava shrine has two Shiva Lingams and a Siddhi Vinayaga idol with a different look of trunk.

As per legend, Lord Ram wanted to perform pooja to Lord Shiva in Rameshwararm in the Southern Tamil Nadu. He ordered Lord Hanuman to bring an idol of Shiva Lingam from Kasi in North India. When Lord Hanuman was returning from Kasi via Ramgiri, Lord Bhairava used his power to make Hanuman sweat and get tired. He wanted to have water and saw a pond at this site. He gave the Shiva Lingam to a boy without knowing the fact that it was Bhairava. When he returned, he found the Shiva Lingam installed on the ground. He tried to lift the idol in vain. Hence, he cursed the pond to become a hill and went to Kasi to take another Shiva Lingam. As the Shiva Lingam idol was pulled by the tail of Hanuman, it got the name "Valeshwara".

There is another story associated with the same temple. It is associated with the King Vali. Vali had the Habit of doing Sandhya rituals in the nearby oceans. The sea in the earlier days was much closer to the present day Temple. On seeing the Swayambhu (self-manifested) Lingam form, Vali wanted the same to be installed in Kishkinta, (the present day Hampii) and tried to take the statue. However he failed in his efforts how much ever he tried. So in a fit of anxiety, he tied his Tail around the Lingam and tried uprooting the same. Then he prayed to Lord Shiva and begged for forgiveness of his act. The lord, ever so benign, appeared with his consort as a nomad complete with dogs etc. and camping outside the temple, taught Vali the process to regain his energy.

The international airport located in Hyderabad is the nearest.

Chittoor is the nearest railhead.

Chittoor is well connected by roads to all major cities.