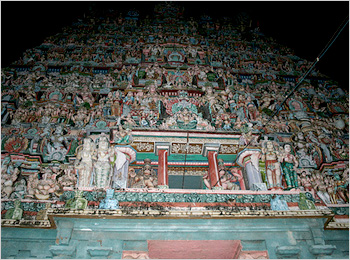 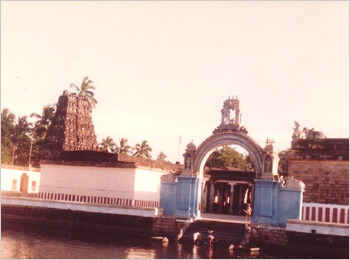 The temple has five inscriptions mainly belonging to the period of Kulothunga Chola I (1070-1120 CE). The inscription on the steps of Subramanya shrine records the shutter of the sluice at Sattainathapuram measures 35 inches in length and 8 inches in breadth.The one on the right of the temple tank indicates the tank, Nachiyar shrine, and its hall were completely renovated when Kanderayar was governing the Sigali Simai, and during the management of the temple by Muthukumaraswami Tambiran, a disciple of Sivagnanadesikar-Sambandar of the Dharmapuram Adheenam.

On the wall of the second precinct, the inscriptions state that the courtyard of Thayalnayagi shrine, the sacred steps and Tattisuri hall were built during Tamil year 4868 corresponding to 1689 CE. On the floor near accountant's seat registers a deed granted by Sankarabaragiri Rengopanditar by Ambalavanatambiran, an agent of the temple. The Easter gateway inscription indicates the gift of taxes from Manipallam in Tiruvalipparu. 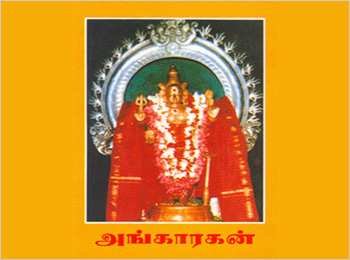 Vaidyanathaswamy is the main deity here and His consort is Thayyalnayaki ambal. She stands with the medicinal oil to cure the diseases of the devotees. Lord Subramanya, a very important deity here, is known as Selva Muthukumaraswamy. The temple has a five-tiered gopuram (temple tower) and large precincts. The central shrine is that of Vaitheeswaran present as lingam in the inner most sanctum. The first precinct around the sanctum has the metal image of Subramanya, worhsipped here as Muthukumara Swamy. The other metal images in the sanctum are of Nataraja, Somaskanda, Angaraka and stone sculptures of Durga, Dakshinamoorthy, Surya (Sun god), Jatayu, Vedas, Sampati.

The shrine of Thaiyalnayaki who stands with the medicinal oil to cure the diseases of the devotees is present in the second precinct facing south. The large precinct also has a small shrine to Dhanvantari and shrine of Angaraka in stone sculpture. The southern gateway from this precinct leads to the temple tank and directly faces the Thaiyalnayaki shrine. The Sthala Vriksha (temple tree) is margosa (Azadirachta indica) which possesses medicinal properties. It is located in the eastern gateway of the temple. The eastern gateway also has the shrine of Adi (original) temple that has a smaller replica of the main shrines. There is a fine metal image of Gangavisarjanar inside the temple.

Near the Eastern Gopuram (tower) there are deities of Jwarahareshwarar (on who cures the common fever), Palaniandavar and Angarakan (Moolavar). The sthala vruksham is neem tree and is found in the outer praharam(circumambulatory path) near the Eastern Gopuram. This tree is supposed to have been in existence since Kritayuga. It was Kadamba during the Kritayuga, Vilva during the Tretayuga, Vakula during the Dwaparayuga and in the Kaliyuga it is neem.  You can see the deity of Aadhi Vaitheeswaran under the sthala vruksham.

It is believed that Rama and Lakshmana cremated Jatayu here. There are niches of Rama, Lakshmana, and Vishwamitra. Vasishtha and Jatayu near the Jatayu Kunda.

Nethrapidi Sandhanam and Thiruchandu Urundai are two of the prasadams which are believed to cure all ailments. Thiruchandu Urundai or medicinal pellet was given by Vaidhyanathaswamy to Angarakan to cure his leprosy. It is prepared from the Homa Kundam. Nethrapidi Santhanam is a paste made by mixing sandal powder and saffron with water. This is applied on Muthukumaraswamy’s forehead before being given as medicine. 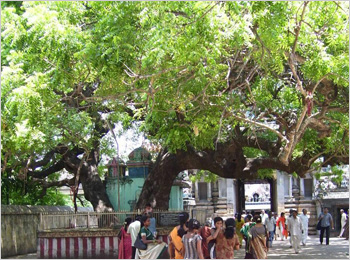 During the Ramayana period, Rama, Lakshmana and Saptarishi have worshipped the deity in this place. There is a pond in this temple called Jatayu Kundam (a pot of Jatayu’s, with holy ash of Vibhuti). One of the nine planets, Angaraka (Mars), suffered from leprosy and was cured by Vaidhyanathaswamy and from then on it is treated as one of the Navagraha Temples for planet Angaraka. Parvati, the consort of Shiva, asked her son, Subramanya to appear with one face from his regular appearance of six faces. When he did so, she was pleased and presented him with vel (a weapon) to slay the demons. Subramanya overcame the asura Surapadman (a demon) and in the war, his army was severely injured. Shiva came out as the healer Vaitheeswaran and cured the wounds.

Brahmotsavam is the annual festival that is celebrated during the months of Pankuni and Thai (January–February). Karthigai is celebrated in November. Kantha Sashti is a festive occasion for Subramanya, and is celebrated in the shrine of Muthukumaraswamy.

Chevvai Dosham caused by unfavourable position of Angarakan or Chevvai in the horoscope may manifest as aggression, a tendency to get into unnecessary arguments or jealousy. It can result in a loss of money, physical injury or even imprisonment. Chevvai Dosham is rectified by performing parihara poojas to the lord here. Devotees may perform Angaraka Pooja to get rid of a financial crisis. Worshipping Chevvai helps neutralize negative effects. Offerings of red cloth and Bengal gram or kadalai paruppu are made here. Tuesdays are special days, as Chevvai is associated with that day of the week.

There are a few chatrams or choultries where one stay. If one reaches in the morning and wants to leave immediately after darshan, it is best to opt for a choultry, as they are the most economical option. They charge Rs.100 or less for the use of their facilities. A similar charge is applicable if one wants to rest for a couple of hours in the afternoon.  If one would like to have a more comfortable accommodation, especially an overnight stay, a few Hotels like Sadhabhishegam are available for access, and it also serves good food. Thayyalnayaki mess opposite the Western Gopuram is a decent place to eat.

The Vaitheeswaran Koil is the nerve centre for Naadi Josiyam, which is a popular form of astrology. The great sages of India had the power to look into the past and the future of the entire universe, and had written these predictions down on palm leaves. These predictions can be deciphered by expert Naadi astrologers only.

The holy waters of the Siddhamirtham Tank that are situated within the temple complex contain nectar and a holy dip that is believed to cure all diseases. Devotees take a holy dip in the temple tank before worshipping Vaitheeswaran in the temple. It is also local that dissolving jaggery in the waters and then healing oneself with prayer will cure skin diseases. Tonsure ceremonies for the first time for children are done to promote growth of the children. Mavilaku (lighting of a lamp in rice cakes) is a form of worship in this temple. The practise of pouring salt and pepper in front of the temple mast and in a pot near the temple tank is followed. Unlike other temples in South India, where each shrine has a priest, each priest in the temple associates himself with devotees, and performs worship on their behalf in all shrines.

The holy soil rounded with ash, or the Thiruchandu Urundai, is treated as medicine. It is believed that it can cure all diseases. Another medicine given is chandan, or sandalwood powder, along with saffron. It is a practice to purchase silver-plated images of body parts to put in the Hundi, in order to fix ailments that one might have. The temple is a part of the popular Navagraha pilgrimage in Tamil Nadu. Planets are believed to influence horoscopes based on the time of birth, and subsequently continue to influence the course of one’s life. Each planet is believed to move from a star to another, within a predefined period, and influences one’s fortunes. The Navagrahas, per Hindu customs, are believed to provide both good and bad effects for an individual, and bad effects are mitigated by prayers. The common worship practice of devotees include offering cloth, grains, flowers and jewels specific to the planet deity. Lighting a set of lamps is also commonly followed in the temple.

The nearest airport is at Trichy.

The nearest railway station is at Kumbakonam. There are frequent trains from Mayladuthurai, Kumbakonam and Ariyalur.