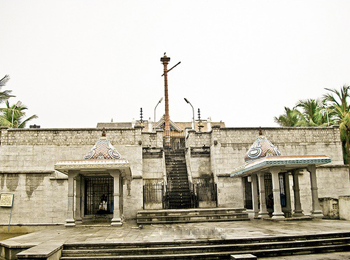 Vada Sabari Ayayappa temple is one of the prominent landmarks at Rajah Annamalaipuram, Chennai. Sabari Malai is considered as the holy abode of Lord Ayyappa. This Ayyappa temple located at Chennai is an replica of the original Sabarimalai Sastha Temple. Since this temple is dedicated to Lord Ayyappa and is situated to the north of Sabari Malai, devotees call this shrine the Vada Sabari. Devotees who are unable to visit Sabari Malai due to various reasons, worship Lord Sri Ayyapan here. Unlike the temple at Sabari Malai, this temple is open throughout the year. The temple is controlled and managed by Rajah Annamalaipuram Sri Iyyappa Swami Temple Trust. The chief deity Lord Ayyappa goes around the temple on a silver and golden chariot during festive days. Traditional worship rituals similar to that of the original Sabari Malai Sastha temple, are performed to Lord Ayyappa here.

The Vada Sabari Ayyappa Temple very much resembles the original Sastha temple at Sabarimala, Kerala. The temple stands unique with its Kerala style of architecture in a city that typically follows the architectural style of Pallavas and Cholas. One main specialty of this temple is the presence of the apex structure called Kumbham, found in most temples in India.

The temple is actually built on three floors, which gives an impression that it is perched on top of a hill. The sacred 18 steps (padhinettam padi) leading to the original Ayyappa temple at Sabari Malai is recreated in this temple as well. The vigraha of Lord Ayyappa is made of Panchaloha (five alloys/metals) which adds to the beauty and glory of the deity. The temple is known to attract a number of devotees every year. Many devotees also undergo rigorous viradham (austerities) and carry the Irumudi Kattu (the twin bundles of offerings). They climb the sacred steps with their Irumudi’s on their head to enter the sanctum of Lord Sri Ayyappa. This is one of the prominent traditions that are observed in Sabarimala even today. There is also an alternate passage through which the devotees can enter the temple and seek the divine blessings of Lord Ayyappa.

The Vada Sabari temple at Chennai has separate shrines dedicated for Sri Guruvayurappan (Krishna) and Sri Devi. Other sub-deities like Kannimoola Maha Ganapathi (Ganesha, the elephant-headed god), Nagaraja—the king of snakes and Maaligaipurathu Amman (Manja Matha) and other Parivara Devatas (family of gods) are also present in this temple.

One another special feature of this Ayyappa Temple at Chennai is the large prayer hall made of Jaipur tiles. The hall is so huge that it can accommodate more than 1500 people. The temple also has a 40feet high Dhvajasthamba (flag post). The temple is constructed with excellent infrastructure facilities and is well maintained. The temple corridors are brightly lit with sodium vapor lamps that ensure safe and easy navigation for the devotees. A separate meditation hall is also present below the temple, measuring 125 feet by 100 feet. This hall also accommodates pilgrims during the Mandala Pooja. The hall is built using Jaipur tiles and can support 1,500 devotees. Music performances, religious discourses and other events are held in the hall during the festival and other important days. The temple also has two well crafted chariots, one made of golden, while the other with silver. These chariots are used on special days to take the deity on procession.

Lord Ayyappan is the principal deity of this temple who is seen in the main Sanctum. Deities like Maaligaipurathu Amman, Nagaraja and Kannimoola Maha Ganapathi are also found in separate shrines here.


The Raja Annamalaipuram Iyyappa Temple at Chennai was built by the continuous efforts of Dr. M. A. M. Ramaswamy, a famous industrialist and philanthropist, who is also the son of Rajah Sir Muthiah Chettiar of Chettinad. Rajah Muthiah Chetiar had donated the land for the temple. In 1973, Dr MAM is said to have first visited Sabarimalai. He was completely bowled over by the divinity of the Lord there that he wanted to share the bliss he had experienced after a darshan of Aiyappa. Thus he decided to construct an Iyyappa temple at Chennai, which is very similar to the one at Sabari Malai. The temple was built in the land donated by Sir Rajah Muthaih Chettiar and the deity's vigraha was consecrated in the year 1982. The panchaloha (five metals) vigraha of the deity represents the five elements of nature. The Lord was brought in procession through various centers of religious importance in Tamil Nadu and was installed on January 25, 1982. The first Kumbabishekam (consecration) was performed on January 29, 1982 with a second Kumbabishekam performed on March 27, 1994 after renovations were done to the temple.

The annual Brahmotsavam (main festival) is celebrated for six days every year in the month of December-January. The celebrations begins with the customary Ganapathi Homam, a ritual offered to Lord Ganesha. 1,008 kalasams (sacred pots) are installed in the temple and sanctified with the recitation of Vedic hymns.

The sacred 18 steps are kept open for those devotees who observe vow during the 41 days of Mandalabishekam and the Brahmotsavam. For the rest of the year, devotees climb up the steps situated on the left and right side of the temple to reach the deity's sanctum, which is perched on top of a 20-feet high raised platform.

A number of cultural programs such as dance and music performances are organised in the temple as part of these festive celebrations.

Abishekam (sacred bath) is performed to the Lord on the second day, while various poojas are offered to the Padhinettampadi or 18 holy steps on the third day of Brahmotsava. Pushpabishekam, or showering of flowers is then performed to the deity. The fourth day witnesses the Utsava Bali (offering made to the deity) in the morning.

On all days of the Brahmaotsava, the Utsavar Murthy of Lord Aiyappa is taken in a procession in the silver chariot in the evenings.


The Aiyappa Swamy Temple at Chennai has a Moolavar (main deity) and the Utsavar (processional image). During the Mandala Pooja in month of December, the Irumudi Neyyabishekam, the ablution with ghee, is performed to the Moolavar for 35 days.

How To Reach Chennai

Chennai International airport which is one of the busiest airports in India is located at a distance of mere 7 kilometres from the city.

Chennai Mofussil Bus Terminal (CMBT) is one of Asia's largest bus stations. Many state owned as well as private companies run buses to an from various destinations within South India like Tirupati, Pondicherry, Coimbatore, Tirunelveli and others. Buses with different classes like deluxe, semi-deluxe, executive and sleeper buses are also available. There are also buses that connect major cities Bangalore and Calicut from Chennai.