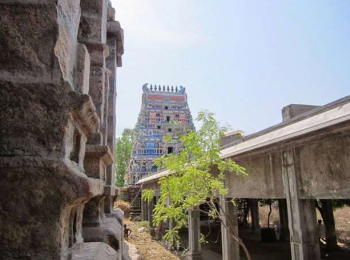 The Uyyakondan Malai temple is a Uchi Nathar temple located at 5 Kms west of Trichy atop a small hill, now known as Uyyakondan Malai,TiruKarkudi. God Shiva known as Uchi Nathar, Ujjeevaneswarar and Thayaar (Female deity) known as Anjanakshi, Balambikai, Neelnedunkanni are the deities of the temple. 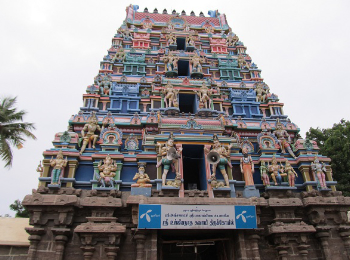 This Sivasthalam is situated on top of a rock hill of 30 feet height. 64 steps cut in the rock takes one to the top of the hill. The temple has 5 prakarams with high walls on the 4 sides. Stone inscriptions found in the temple give details and information of patronage and renovation work undertaken by the Pallava King Nadivarma Pallavan and hence Karkudi is also referred as Nandivarama Mangalam.It is interesting to note that God Shiva's shrine is atop the hill and that of His son God Muruga's shrine is situated at the lower region of the hill. Usually the temples for God Muruga will be found on the top of a hill but here, in this Sivasthalam, the shrine for His Father is atop the hill. 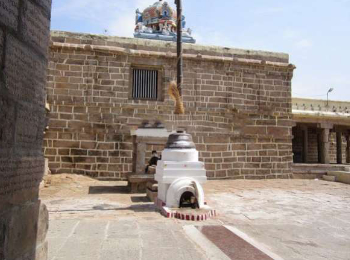 Mrikandu Maharishi did severe penance on God Shiva for being able to bare children. God Shiva questioned him whether he needed 100 useless and senseless children who may live for 100 years or one intelligent, righteous and worthy son who would live only for a short period of 16 years of age. Mrikandu preferred to have one righteous son who may have a shorter but regal life of 16 years. The child thus born was named Markandeya who also became aware about this deadline and then he took shelter in God Shiva. Markandeya, who was an ardent Shiva devotee from his younger age, visited many temples of God Shiva and prayed and worshipped him for longer life. It is in this Shivasthalam at Karkudi, God Shiva pleased with Markandeya's true dedication and worship, appeared in front of him when he visited this temple and gave him a boon that Markandeya will be a Chiranjeevi and will live forever thereby nullifying the deadline of 16 years of life. 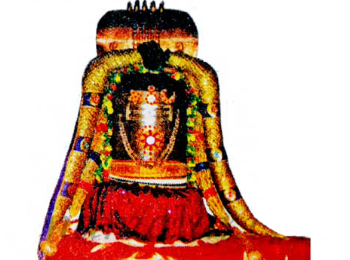 Trichy is the nearest airport

Cabs and auto can be taken to reach the temple

Trichy is the nearest airport.