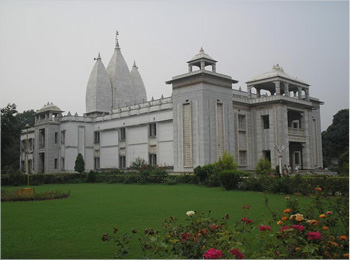 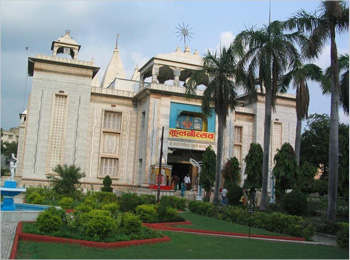 Construction of the temple was completed in 1964 and was funded by the Birla family. The temple was constructed in white marble and landscaping all around the temple. Verses and scenes (pictorials) from Ramcharitmanas are engraved on the marble walls all over the temple. The main gate of Tulsi Manas Mandir will be in marble with an inscription “Shri Tulsi Manas Mandir” Haridwar. On the right side near the entrance, there will is an attraction Tulsi Garden where there is a statue installed depicting the scene of the famous verse: “Tulsi Das chandan ghisen / tilak det Raghuvir.” On the left side devotees can find a beautiful pond, which has the four Ghats. There are four statues installed on each bank of the pond with different subjects of the Epics. The northern Ghat statues depict Shri Kakbhushundji, while the southern bank of the pond depicts Shri Yagywalkaji Maharaj relating to the Ramayana to Shri Bhardwaj Muni.

On the eastern ghat there exists Shri Ashuthosh Shankar (Lord Shiva) which relates to Ramayana and Mata Parvati, and on the western bank Mahamana Goswami Tulsi Das Ji will be shown composing of Ramayana. A little way forward in the mandir areas devotees would find big hall of Shri Manas Mandir having three imposing temples. In the middle there is Ram Darbar with Lord Shiva and mother Durga on each side. Besides idols of Lord Ganesha, idols of gods are installed in traditional way described in the Shastras (ancient scriptures). Also one can find idols of Rishis, gods and goddesses mentioned in Ramayana. One of the unique things of the temple is its marble wall of the hall which is inscribed with the Chaupayees. Dohas, Chhandas and Sorathas (different types of couplets used in literature) along with the innovations at the beginning of all the kands (sections of Ramayana). There is also a pond where there are four idols. Also there is a depiction of Shri Ram Chandra JI applying Tilak on the forehead of Shri Goswami Tulsi Das Ji. 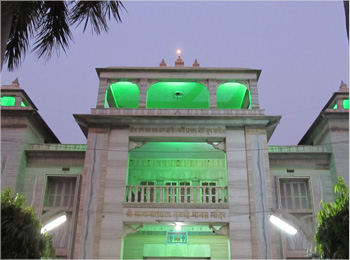 Ram Charit Manas bestowed Lord Rama as a deity. Before that, he was only considered a King who was unparalleled when it came to dignity. Tulsi Das created a god out of him and in coming centuries he started ruling the hearts of Indians irrespective of their religion.

History of the Tulsi Manas Temple 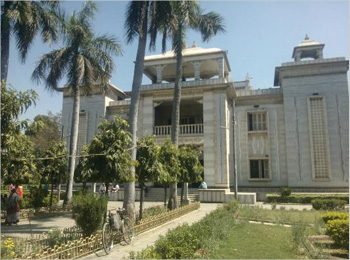 This temple is a very modern temple built only recently in the year 1964. The ancient Indian epic Ramayana was largely beyond the understanding of the common people of the country because it was written in Sanskrit, a language in which only a learned few were versed. Goswami Tulsi Das took upon himself the responsibility of translating the Ramayana into Hindi. This would considerably reduce the number of people who were being deprived of such a fantastic literary work. He composed his Ram Charit Manas at this very spot in Varanasi or Kashi.

His composition gained tremendous popularity. Ram was always acclaimed and recognized not just as a good king but also as a great king. People read of him in Ram Charit Manas and started eulogizing him. Blessed with unparallel dignity and a lot of virtues, he came to be worshipped by his countrymen. He made a permanent place for himself in the heart of his countrymen and so did Tulsi Das who carved a niche for himself in the literary world. Years later a temple in honor of Lord Ram was constructed at the very spot where Tulsi Das had written of him and the temple was named Tulsi Manas Temple as a mark of respect and reverence for him.

People visit this temple for wish fulfilment and for prosperity.

The Varanasi railway station is connected to major cities of India via rail. From the railway station, tourists can hire a taxi or a cab to explore the city.

Varanasi is connected to major cities of Uttar Pradesh and neighbouring states by state-run buses. Private air-conditioned buses are also available from nearby cities to Varanasi.