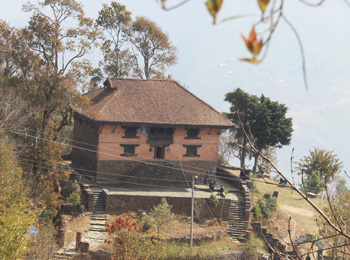 Devi Tripura Sundari Temple is located in the ancient city of Udaipur, about fifty five kilometer from Agartala. It is said to be 500 years old. It is one of the 51 Sakthi peetas. The importance of Tripura Sundari temple is both religious as well as historical. The economy and business of the current day is dependent on this temple. The temple is one of the historic memorials which bears the testimony of the elegant period under the Maharajas. Apart from a place for pilgrimage it is now one evolved into an attractive tourist spots in Tripura. Tripura is one of the holiest Hindu shrines in the north east region of India. Popularly known as Matabari, crowns in a small mound and is served by the red-robed priests who traditionally, minister to the mother goddess Tripura Sundari. Considered to be one of the fifty one Shakti Peethas, consists of a square type sanctum of the typical Bengali hut. It is believed that Sati's right foot fell here during Lord Shiva's Rudra Tandava.

The temple was built during the times of Maharaja Dhanya Manikya Debbarma in 1501. There are 2 identical idols of the same god within the temple. They are referred to as Tripura Sundari (5 feet high) and Chhotima (2 feet high) in Tripura. The idol of Kali is worshiped at the temple of Tripura Sundari in the form of 'Shodashi'. One is made of kasti stone that is ruby-red black in colour. It is believed that the idol was Chhotima was carried by king whenever he went for a battle. This temple is also referred to as Kurma Pitha as a result of it the temple premises resembles kurma i.e. tortoise. Every year on Diwali, a famous Mela takes place close to the temple that is visited by more than 2 lakhs pilgrims.

The temple of Tripura Sundari or Matabari is west facing. The main entrance is in the west. There is a also a small entrance in the north. The northern entrance is believed to be of a later period. Goddess Paravati is worshipped as Tripura Sundari in this temple. The temple is of square shape and small, just measuring up to 24 sq. Feet. A unique feature of the shrine is that it is shaped in the form of a tortoise’s humped back. As a result of this, the shrine is known as ‘Koorma Peetha’.

The deity Goddess Tripura Sundari gracing the temple is made up of touch-stone. The idol is 1 meter 57 cms tall and 64 cm wide. It is being installed on a stone-altar. Devi Tripurasundari is depicted with two pairs of forelimbs with typical gesture or Mudra of Devi. The upper right hand displays Varmudra or a gesture of blessing. The lower right hand displays Abhaymudra, a gesture of assurance. The left forearm holds a Kharag or a Faichion; while the lower arm holds a head of a demon. But, these features are not distinctly visible in the present idol. The Devi wears a crown on matted hair that hides the tufts of undulating matted hair flowing down bilaterally. She wears a Munda-mala, a garland of 13 severed heads. Her face is oval with a small flat nose and a pair of relatively small round eyes. The well-shaped structure of the idol radiates a kind of charm that can only be experienced when seen. She stands upright on the idol of Shiva that lays in Shavasana. Five mundas are believed to be engraved on the surface of the altar bearing the Devi.

There is said to be two identical images of the same deity inside the temple. They are known as Tripura Sundari standing at 5 feet high and Chhotima standing at 2 feet high. The idol of Mother Kali is worshiped here in the form of Soroshi. The idol is made up of Kasti stone which is identified by its reddish black color. Legend has it that the idol of Chhotima was carried during the battle by the king.

Based on legend, the King Dhanyamanikya who was the ruler of Tripura in the end of the 15th century, had a dream where is was instructed to set up Goddess Tripurasundari in the temple that already existed in hilltop near the town of Udaipur. The temple was already dedicated to God Vishnu and he was unable to decide how a Vishnu temple can have an idol of God Shiva. But the king experienced the dream once again and was ordered to install the idol in that particular temple. The king decided to abide by the ethereal command that was given to him and in the year of 1501, the Tripura Sundari temple came into being. This legend is a proof of how the solidarity between the two groups, Vaishnavas and Shaivas, was known and existed even during medieval times.

The Tripura Sundari temple boasts of both historical and religious significance. The temple known to be a popular pilgrimage destination has also evolved to become one of the most biggest tourist spot in Udaipur. The devotees flock this temple seeking a happy married life with partner of one's choice and better health and longevity of husband's health.

How to get there or Accessibility :

Opening Time In Summer 5.00 Am