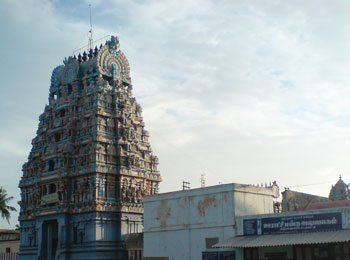 
This temple is located on the Kancheepuram - Uthiramerur route via Orikkai. Enroute to Uttiramerur, and on the banks of river Seyyaaru, Magaral village is a place of heritage and history. Saint Gnanasambandar has sung 11 verses in his Thevaram in praise of the Lord of the temple. One verse goes thus, “For those aspiring relief from various bonds of life and attain their heavenly life, can do so very easily if they worship Magaral Lord surrounded by sages and vedic scholars. My Lord’s hair style is like lightning rays on which Ganga flows with flowers falling. The crescent moon is an added beauty on the Lord’s hair.”

Maagaram" means "Udumbu". Since, Easwaran gave his presence in the form of Udumbu this Sthalam is called as "Maagaral". Magaral is the 7th of the 32 Thevara Sthalams in the Thondai Mandalam. Sambandar came to Magaral during 7th Century AD. Divine life society has published a book on sixty three nayanars for the benefit of devotees. Sundaramurthi Nayanar was a great devotee of Lord Siva. He is one of the Tamil Samaya Acharyas (four Tamil religious Teachers). Sundaramurthi Nayanar sang the glories of Lord Siva at all the sacred places that he visited. These hymns are called Thevaram. They have been collected into a book-form.


The Raja Gopuram of the temple adds to the majesty and grandeur of the temple. As we enter into the temple one can witness the Dwajasthambam, and the Nandi. To the left of the Dwajashtmbam we see the sacred pond, called Agni theertham. We have to walk around the outer Prakaram via the left side. In evening, hearing the Thevara Isai of the temple Odhuvar, this walk in outer Prakaram will stir our soul for spirituality. In the back portion there is a Nandavanam.The temple has a 5 tier Rajagopuram studded with beautiful sculptures and two prakaras-corridors. Lords Ganapathy, Muruga Nataraja, Bhairava and Navagrahas (9 planets) are in the prakaras. Lord Dakshinamurthy graces with His Veena in the tower.

As we enter the inner praharam which is an elevated structure, we see the Dwarabalakas on both sides. Towards the right is the Ambal sannidhi and towards the left is the Murugar sannidhi. going around the inner Prakaram. We are able to see the 63 Nayanmars, Valampuri Vinayagar Sannidhi, Murugar Sannidhi with Valli and Deivanai, Natarajar Sannidhi, Bhairavar Sannidhi and Navagraha Sannidhi.

The sanctum is an elevated structure. One has to enter the elevated artha mandapam for the darshan of moolavar. The vimana (tower above the sanctum sanctorum) is of Gajabrushta (the hip of the elephant) design.


The sthala viruksham is Lemon tree, and the theertham is Agni theertham, Navvi theertham


Lord Shiva graces in the temple as a swayambumurthi. The moolavar, is chathura peeta Aavudayaar; the linga baanam is like the tail part of Udumbu; and it is Swayambhu lingam. Here Lord Sri Muruga has an elephant as vahana instead of the usual Peacock. Indira, to celebrate the victory of Lord Muruga over the demon king Suran, gave his daughter Devasena in marriage to Lord Muruga and also gave his elephant Iravatham. Hence the vahanam.


A demon Makkiran was doing Shiva Puja when Lord Muruga destroyed Surapanma and other demons, thus escaped the wrath of the Lord. He came to this place, named the Lord Makkiran, his own name. In the years followed, it changed as Magaraleesar.

Lord Brahmma, after performing puja to the Lord in this place, planted a miracle jack tree that would yield one fruit each day. King Rajendra Chola struck by the wonder ordered that one person from each family should carry this fruit on their head to Chidambaram to be offered as nivedhana to the Lord. After the pujas, it will be sent to the king.

One day it was the turn of a Brahmin boy. He thought that the king ought to have appointed his own men for the job instead of burdening the public. He told the people of the village that he was a boy and could not bear the weight of the fruit and requested them to do the job and offered to take care of their houses till their return. All the people left the place together to help the boy. The boy thought that this problem will continue only if the tree existed and he simply burnt it. He told the people that the tree caught fire somehow and was reduced to ashes. When the king enquired the boy, he said, “You made no facility for us to carry the fruit to Chidamabaram, hence, I burnt it.” The king replied that the boy ought to have demanded the facility and ordered him to be exiled tying his eyes.

The king accompanied the boy while being taken for exile. He saw a golden chameleon on the way which hid into an anthill when the king tried to catch it. While demolishing the anthill, it began to bleed and a voice condemned the action of the king. The king fainted. The voice sounding again said that the chameleon was none other than Lord Shiva and ordered him to build a temple. It may be noted that the size of the Linga in the sanctum sanctorum is just the size of the tail of the creature.


10 day Masi Brahmmotsavam in February-March is grandly celebrated in the temple.


It is believed that consuming the abishek theertha serves as an effective medicine reducing the impact of blood related illnesses, fractures, impaired vision, paralysis etc. Devotees perform pujas here for unity among the couples, for relief from planetary inflictions and those seeking child boon do Angapradakshinam –rolling around the prakara.


The nearest airport is at Chennai.


The nearest major railway station is at Kanchipuram.


Bus facilities from Kancheepuram are available.